the key differentiator here is the addition of two dummy modules to the dual-channel pack....

The first letters on any PC product marketing manger's meeting notes are probably R followed by G followed by B. If a product can have lights, RGB gets in there somewhere. This visual ingress is best exemplified by bolting on LEDs to DDR4 memory modules, with each manufacturer looking to outshine the other.

A new entrant in this already saturated ring is Aorus, better known as the producer of premium consumer motherboards and graphics cards. Rather than adopt a strictly me-too product, which is what one would expect, the key differentiator here is the addition of two dummy modules to the dual-channel pack. Their purpose is to provide extra, even illumination when using just two working sticks and they do it well. Kind of makes you wonder why it hasn't been done before.

Aorus sensibly opts for Samsung B-die-bearing modules specified at reasonable speeds, uses substantial heatspreaders that look good, and the £200 16GB (2x8GB) pack doesn't cost the earth. If you like your RGB everywhere and plan on using dual-channel memory, then the Aorus RGB memory is definitely worth a look. 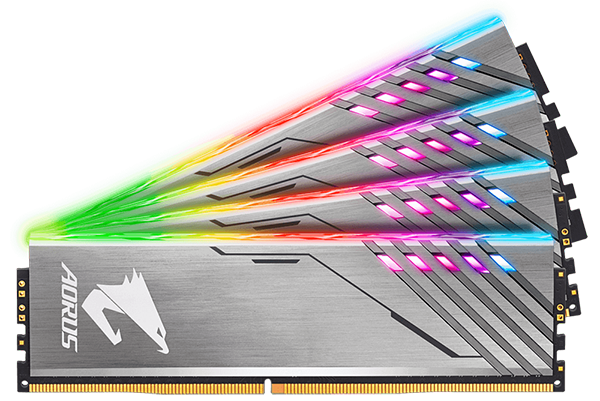 Is it, in a case full of RGB, having one item/aear too bright can disrupt the look.

If it gets in the UK quick enough, may even consider them for my gaming build, to go with Gigabyte mobo and GPU
Posted by Tarinder - Fri 20 Jul 2018 14:10

Wolfclaw
Th Bad - Not as bright as latest Corsair RGB

Is it, in a case full of RGB, having one item/aear too bright can disrupt the look.

If it gets in the UK quick enough, may even consider them for my gaming build, to go with Gigabyte mobo and GPU

The memory is a little less bright than the RGB already on the motherboard. I'd say the Corsair is brighter still, but I don't feel you'll be shortchanged with the luminosity of the Aorus modules - Corsair made a point of going super-bright on the Vengeance Pro RGB stuff.
Posted by outwar6010 - Fri 20 Jul 2018 14:40
Imagine trying to sell it on ebay after adding actual ram
Posted by OilSheikh - Fri 20 Jul 2018 20:40
Gigabyte now make RAM as well ?
Posted by philehidiot - Sat 21 Jul 2018 00:36
My RAM has LAZORS on which modulate their output frequency in the inverse wavelength relative to the frequency of rotation of my CPU glitterball which reflects the energy onto LDRs on my sound card which spits out techno derived from the received laser signals. There is also a PRF on the PW laser signal which is linked to the frequency of my CPU which again makes the glow in the dark bananas attached to my monitor glow and sing at a frequency created by a complex mathematical equation with uses the combination of the PRF of the laser and the frequency of the glitter ball along with the cosine of theta, theta being the angle of intersection between the reflected light from the glitter ball and the LDR which directly affect the intensity of the banana brightness. Thus a 90 degree interaction between beam and LDR will result in a cosine 90 which is zero and this will result in no banana glow.

My RGB > your RGB. Mine has glowing bananas.