Like every motherboard manufacturer in recent years, MSI has expanded its PC-centric catalogue to offer laptops, peripherals, monitors and a host of gaming gear. Arguably the least well-known of its product paraphernalia is the Immerse line of headsets.

In all, seven models cater for the gamer, split between five Immerse models and two from the D-series. Near the top of the stack is the £80 Immerse GH50, so let's take a closer look.

Being designed for the PC gamer first and foremost, the foldable GH50 connects solely via wired USB. That's a shame because we'd have expected either wireless and/or Bluetooth connectivity at this price point. Key features include RGB-lit earcups, a detachable microphone, 7.1-channel virtual surround sound, and an in-line remote toggling basic features.

Such design choices mean the headset is bereft of the usual raft of buttons and controls, lending itself to a clean aesthetic, as the only interruptions on the plastic exterior are the hardwired 2.2m cable and microphone connector. Build quality is reasonable rather than exceptional. Soft-touch ABS plastic surrounds the non-removable cups and headband. There's good articulation around the plastic yokes while the metal micro-adjustable headband offers a very snug fit.

Immerse GH50 uses, in my opinion, overly thick faux leather earpads around the twin 40mm drivers. So much so, that, no matter how I adjust the headset, the pads put too much pressure on my ears, which becomes telling and tiring after wearing them for, say, an hour. The pads haven't softened by an appreciable margin in the three days I've been wearing them.

A 300g weight, excluding controller, also makes the GH50 feel a tad heavy for long-term use. There's a fine line between comfort and enveloping sound; the Immerse, subjectively speaking, fails to find it. The RGB implementation, however, is better, as it rings the external earcups and also illuminates the dragon logo. Colours are even, vivid, and controlled through the MSI Dragon Centre software. Being pragmatic, having RGB on the earcups means the lighting effect is for others; you certainly don't see it, even in peripheral vision.

Foldable for easy transportation, MSI's decision to put all the controls on a large in-line remote only 60cm down from the earcups is strange; it needs to be further down the cable. The reason is that, in a regular sitting position, the control doesn't quite reach my desk, as it hangs from the edge and tugs every time I make a movement. Makes far more sense to have it at least 100cm down so that it sits stably.

Toggling 7.1-channel surround sound - which is only available via software - volume and microphone on and off are features present on most gaming headsets. MSI adds in a central vibration system control button, as well, which laces the sound with massive dollops of unnecessary bass - enough to make the earcups vibrate, hence the name - that hampers audio fidelity. It's a feature that's best left off.

Though the Immerse GH50 works just fine as a plug-and-play solution, getting the most out of the features entails installing the Dragon Center software and the attendant SDK. The whole shebang takes a wee while, and whilst the features are grouped together sensibly, it doesn't feel quite as slick as, say, Corsair's iCUE. Still, MSI offers decent lighting support, including a bunch of preset modes and a raft of equaliser settings, though the out-of-the-box sound signature is neutral to begin with.

That brings me on to sound quality. It's best when no further processing is taking place. Every effect under the Xears tab makes it worse. As is, the audio signature is reasonable but not excellent. The midrange is clear, treble is a bit bright, while the bass has a preponderance to overpower everything. I'd liken the performance to a £30-40 pair of straight-up headphones.

Immerse GH50's unidirectional microphone falls into the reasonable camp, too. The stalk is adjustable yet requires a fair bit of force to get it into the perfect position. Others report the audio quality to be on a par with similar gaming headsets.

Overall, the MSI Immerse GH50 feels too much like a me-too product to stand out from the ever-increasing gaming headset crowd. It is middling in every area - neither great nor bad - and at the £80 price point, having wired USB means it feels expensive. Should the price be keener, closer to £50, then it becomes more relevant to the gamer on a budget.

Consider the Immerse GH50 if you are already heavily invested in the MSI ecosystem. For everyone else, there's better value to be had elsewhere. 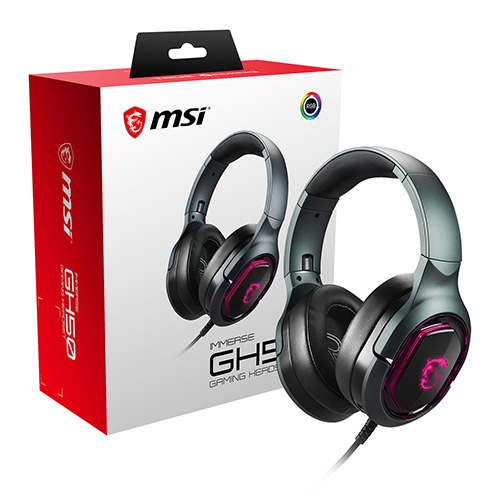 The MSI Immerse GH50 gaming headset is available to purchase from Scan Computers.