The mat functions without the companion Synapse software and provides charge immediately. Note that the ERT is only applicable to the Mamba HyperFlux mouse so there's no opportunity of charging smartphones and the like. It takes about five seconds for the Mamba to mate with the pad and become operational, which is no big deal because that time is usually taken up by the computer boot process, though it may cause minor irritation if the mouse is left to one side.

The direct-to-mouse magnetic induction is even across the pad: we tried it on every segment and were able to get a strong connection in each location. Mamba's supercapacitor fills up as the mouse is left on the pad, enough to give it temporary charge for those lift-off scenarios. After a couple of minutes, there's enough residual charge to keep the mouse active, without the need for the mat, for around 10 seconds, which is plenty of time for moving it up and away during fast panning. Importantly, putting it back on the pad results in an instant, lag-free connection; enough for it to feel like a regular wireless mouse or, for that matter, a corded solution.

There's some form of power-saving mode as the mouse turns itself off after a period of inactivity, requiring a gentle nudge to bring it back to life. After a while, you pretty much forget it's using ERT and think of it as a corded/normal wireless mouse - it has the same general feel as a regular Mamba. The intrinsic benefit with this approach is there's no need to recharge the batteries, because there are none, and a lighter weight that feels more natural to gamers who have honed their skills on sub-100g mice.

Razer has shown that it can build an effective combination that works just as intended and taps into the company's lighting ecosystem.

Let's be clear. Razer's electromagnetic resonance technology approach to the Firefly and Mamba HyperFlux simply shifts the cable from mouse to mat; you still need to have a corded USB connection to the computer. And the price of such a move is a £250 asking fee: ouch. The overall experience doesn't feel any different to my £50 corded mouse-and-mat combo and I'm not a good enough gamer to appreciate any advantage of going down the wire-free route for the pointer.

That said, Razer has shown that it can build an effective combination that works just as intended and taps into the company's lighting ecosystem. An extravagant purchase for many, die-hard Razerites now have another wire-free mouse option that, crucially, keeps the weight down to under 100g. 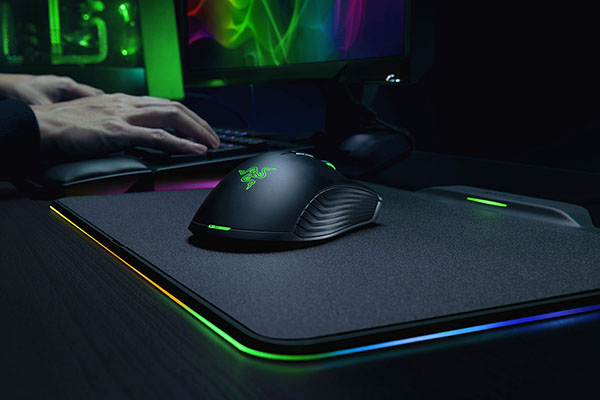 The Razer Mamba HyperFlux and Firefly HyperFlux are available from Razer.

utopic
For their price, Razer mice seem cheap. Don't know about their other products, haven't tried them.

A lot of PC gear is like that though. I wouldn't say Razer's stuff feels any different to Logitech's etc.

FWIW I had a Mamba 2012 that lasted 5 years before the RMB died. It probably could have been fixed if I'd taken it apart but it had also suffered thousands of hours of LoL in that time with multiple RMB clicks per second.
Posted by Friesiansam - Sat 10 Mar 2018 16:30
£250? Strictly one for the well-off and gullible.
Posted by ByteMyAscii - Sat 10 Mar 2018 19:23
Worrying in my opinion that less RGB on the mouse is deemed a bad thing, while loss of adjustable click force is insignificant.
Moving the cable to the mat is pretty significant when it comes to mobility of the mouse, the very reason why I personally would want a wireless mouse in the first place.
I am not of the view that everything simply has to be wireless, so a cable on a mouse mat or a keyboard is a non-issue for me.
Though the cost is far too high currently, for Razer and for other competing implementations which I suspect aren't compatible with each other.
Posted by FRISH - Mon 12 Mar 2018 02:27

Friesiansam
£250? Strictly one for the well-off and gullible.

But the mouse pad is also RGB!