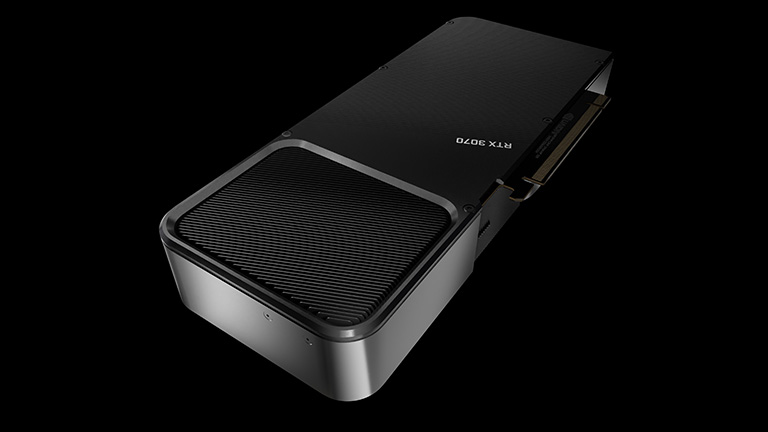 The Nvidia RTX 30-series launch has been beset by problems that have taken the lustre off what is a solid line-up of enthusiast gaming GPUs. A severe lack of stock and initial stability-related issues stifled the RTX 3080's reach and potential.

Though RTX 3080 remains a mighty challenge for AMD own next-gen 'Big Navi' cards, it's not the high-performance Ampere-based card that most are interested in. That honour falls to the GeForce RTX 3070, released today at $499/£469, and purportedly offering superb QHD performance at the more amenable price point.

Now, a starting price of $500 is hardly cheap - it's the same cost as the fully-fledged Xbox Series X and PlayStation 5 consoles - yet demand is still expected to outstrip increased volume, so let's see what all the fuss is about.

For those not in the know, it's worth reading all about the Ampere architecture underpinning 30-series cards. RTX 3070 is materially different from the 80/90 models as it uses a different, smaller die known as GA104. The two bigger, more powerful cards have 63 percent more transistors, 60 percent more die area, at least 70 percent more memory bandwidth, along with total board power budgets that are at least 45 percent higher. Big numbers from a bigger GPU.

Harnessing a smaller chip has clear ramifications for cost, power and performance, so it makes sense to have a purpose-built die rather than lop egregious amounts off the full, high-cost GA102. 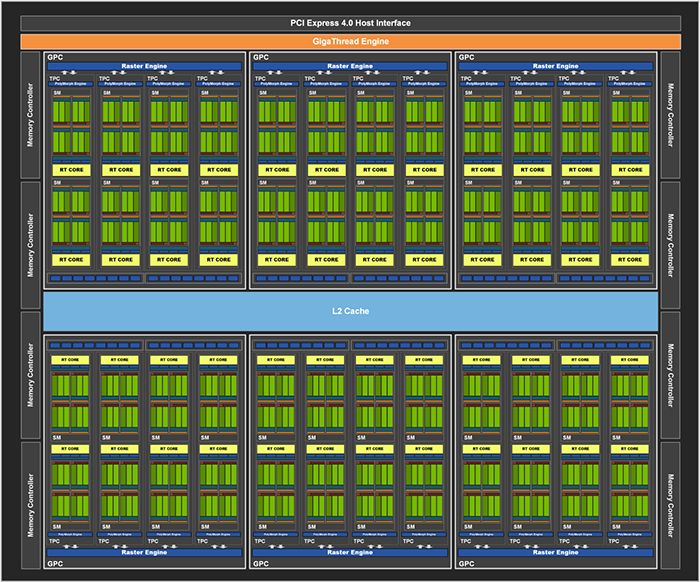 Ampere GA104 is significantly smaller and more power-efficient than GA102

The full GA104 die incorporates 48 SMs that are each equivalent to the 84 SMs in the bigger brother GA102. Just like that GPU, Nvidia doesn't use the full complement to construct retail cards. GeForce RTX 3070 grabs 46 out of the 48, leaving some breathing room for, say, an RTX 3070 Super further down the line.

Even so, 46 SMs spread over six GPCs are plenty powerful enough. Knowing that each SM has 64 dedicated FP32 cores and a further 64 that run either floating point or integer work on an as-needed basis, Nvidia equips RTX 3070 with 5,888 shaders (46*128). Their peak boost frequency of 1,725MHz is similar to RTX 3080/90. Crunching the numbers reveals total floating-point throughput - aka shader performance - is north of 20TFLOPS.

And as RTX 3070 uses the same ratio of Tensor Cores and RT Cores per SM, it's easy to understand how this GPU arrives with 184 and 46, respectively. It's difficult to compare just how these facets interact with one another against differing combinations for the 20-series, but that's exactly what benchmarks are for. If you believe the green team, RTX 3070 is a match for last year's $999 RTX 2080 Ti and comfortably faster than the RTX 2070 Super that it replaces at the $500 price point.

Nvidia's reduction in top-end muscle is also replicated in the memory subsystem. RTX 3070 uses a narrower 256-bit bus and ties it to 8GB of regular GDDR6 memory operating at 14Gbps. This move translates to this GPU having only 59 percent of the RTX 3080's peak bandwidth and, looking up top, 68 percent of its floating-point power. Understandable cuts in the grand scheme of things when the retail price of the RTX 3070 is 71 percent of its more powerful silicon sibling.

A key benefit of tempering Ampere is a reduction in power. 220W is more akin to the last generation, and it constitutes 69 percent of the RTX 3080's requirement. All these numbers suggest Nvidia is aiming at 70 percent of that GPU's performance, thus leaving plenty of room between the two for another graphics card - 3070 Ti, perhaps - that may be needed if AMD comes in aggressively between $500-$700 with its Radeon RX 6000-series GPUs.

The major takeaway here is that with GeForce RTX 3070, Nvidia has produced a specific piece of silicon whose performance characteristics, on paper at least, endear it to playing the latest games at sky-high framerates at QHD and passable performance at UHD.

Nvidia is duly releasing a Founders Edition card based on its new design philosophy. Priced at the entry-level $499/£469, head on over to see how it looks.