GeForce RTX 3080 GPUs are still coming in thick and fast to the labs. The situation remains exactly the reverse at retail, where Ampere-based stock is more of a trickle than a steady stream. Supply-side issues are likely to remain unresolved for quite some time, leading to frustration and head-scratching in equal measure.

But, and it's a big one, if you are able to get hands on the excellent GeForce RTX 3080, which one ought you go for? Four partner models have been evaluated, each offering something slightly different to the Founders Edition. Carrying on this theme of diversification is Inno3D whose RTX 3080 roster comprises the Twin X2 OC, iChill X3 and iChill X4.

Key characteristics of the review iChill X3 are size and a focus on RGB lighting. Measuring 300mm long, 135mm tall and taking up a full complement of three slots, it's considered large by modern standards. The 1,462g weight is also a concern because Inno3D includes a locking stand in the bundle, though it wasn't included in our press sample box.

A black-and-grey aesthetic is inoffensive for most builds. Triple 90mm fans switch off when temperature is below 35°C and then spin back up when exceeding 59°C. The transition isn't the smoothest, mind, and like a few others, having minor load on the GPU can cause the fans to turn on momentarily.

Relative topside restraint gives way to a visually louder affair on the back. The studded central section of the metal backplate is reckoned to increase cooling surface area, but peering closer shows there isn't a whole heap in contact with it.

Giving the card its bulk is a new eight-heatpipe heatsink offering some impressive numbers over the 20-series implementation. Inno3D says it has 40 percent more heatpipe length and 50 percent more total cooling area. The one-piece affair is supremely robust and also covers the memory chips and VRMs through thermal pads.

Such overt cooling is arguably needed when wicking away the 340W plied by the GPU. That's 20W more than reference, so it should come as no surprise to learn the X3 is overclocked. The FE card chimes in at an official 1,710MHz boost while the most premium partner cards install a guaranteed 1,815MHz. Inno3D goes for a safe middle ground by opting for 1,770MHz, though as you will know, real-world core frequencies rarely limit themselves to what's advertised on the box. It's interesting to learn this 1,770MHz boost is as far as Inno3D will go for any RTX 3080 card, including the top-line X4. More on frequencies later.

Memory, meanwhile, tows the Nvidia company line by clocking in at an effective 19Gbps. As the mid-stack offering, there's no provision for a dual BIOS, which is a shame. On a more positive front, we can also report there's little coil whine on our sample.

It's good to see the X3 rein in the cabling requirements by using the standard dual 8-pin arrangement. There's a generous cut-out for easy connection, and the width of the card leads to the twin PCIe cables becoming more recessed than we're used to. We view that as a good thing because they don't jut out of the card.

The juxtaposition of aesthetics is jarring; the smooth left-hand side is at odds with the busy right, as we look at it, yet there is good reason for that. 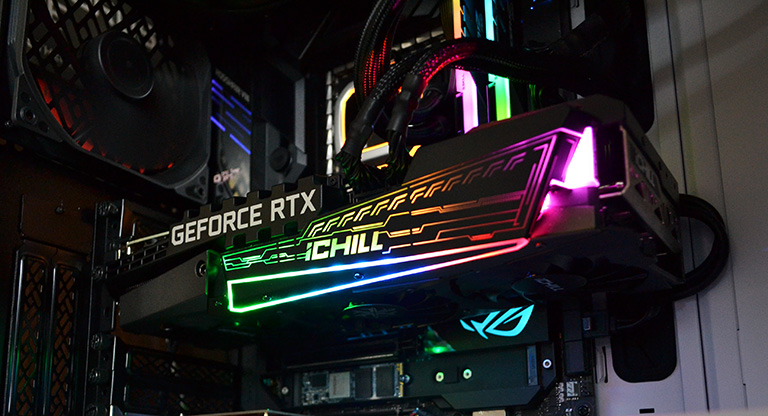 Enter RGB. A large portion of the oversized cooler is devoted to lighting. To Inno3D's credit, it is done well, with no obvious localised hotspots. The patterning is like Marmite; you will either like it or loath it, though the overall effect marries up well with the RGB already present in our Ryzen test system. Achieved by having a number of LEDs placed across the top edge of the PCB, it's one of the best we've seen on any card. There's even a tail fin acrylic attachment in the bundle for greater RGB coverage.

There's nothing wrong with the default effect out of the box. It can also be tweaked using Inno3D's in-house TuneIT software. If, however, the plan is to match up with the motherboard's software, a bundled cable attaches from the front of the card to the relevant board header. Unfortunately, the card's header is on the window side and the cable cannot be easily hidden out of view.

No surprises in the output department. The I/O section is actually more instructive in showing you the card's full height, which we don't deem a problem due to the lack of SLI on the RTX 3080.

Inno3D sets a £720 pre-order price on the iChill X3. That's pretty good, all things considered, though we bid you good luck in finding one in stock anytime soon. Majoring on lighting, let's now see how it performs.