Released yesterday, the GeForce RTX 3080 dismisses all other high-end cards in the performance stakes thanks to its Ampere technology that packs in more muscle than ever before. Our numbers show it's comfortably faster than the last-gen GeForce RTX 2080 Ti and up to 75 percent quicker than the RTX 2080 Super, which is the card it replaces at the $699/£649 price point.

Nvidia revamps the Founders Edition card design to deal with the unexpectedly high 320W TDP demanded by RTX 3080. It does a good job, too, as both thermals and noise are impressive once we factor in the 70W or so over the thirstiest RTX cards from the 20-series family. That's not to say RTX 3080 cards from AICs are not worthy of consideration, and Asus reckons it has Nvidia beat on frequency, thermals and noise with its TUF Gaming OC. Let's take a closer look. 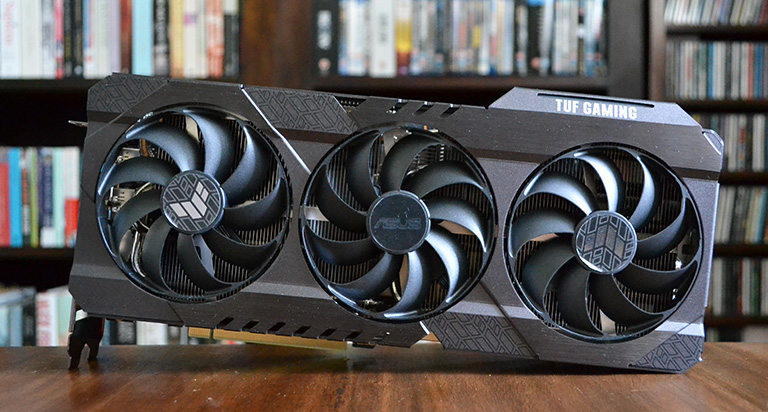 There's little point in going small for RTX 3080. Asus duly obliges the bigger-is-better crowd with a package that's 300mm long, 127mm wide and 52mm thick. That's big, but its Strix brother is 20mm longer, 13mm wider and 5mm thicker. Asus says Gaming TUF OC is a 2.7-slot card, but you can ignore that and assume the hulking cooler obscures three slots. We actually have no problem with its size when SLI is not available, and most will be running a single card in a mid-tower chassis which has plenty of spare room. Make sure it's screwed in properly, as well, considering it tips the scales at 1,395g.

Build quality is top-notch. The all-aluminium shroud has no flex, and the trio of fans switches off at temperatures below 55°C. When they do come back on, the transition is smooth in both speed and noise. The centre fan rotates in the opposite direction to the outer duo, and Asus claims this reduces cross-fan turbulence. Running at the same maximum 3,600rpm as the previous generation, Asus further claims there's an additional 12-15 percent airflow at the same noise level. 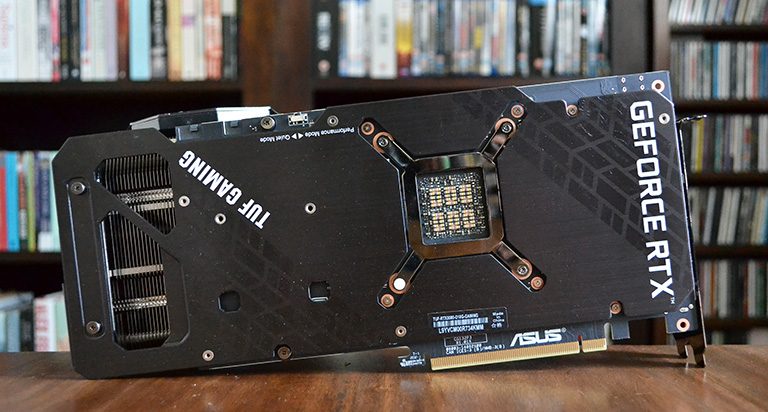 The sheer size of the card is understood when looking at it in relation to the standard PCIe 4.0 slot. A card-wide rear plate makes solid contact with rear-mounted memory chips, while a venting section enables airflow to push through the heatsink and towards the CPU/rear exhaust area.

Peek closely enough and you see a small switch that flicks between Performance and Quiet BIOSes. Both run the card at 340W, or 20W above FE, though the Quiet profile sacrifices 5°C of temperature for a 10 percent noise reduction. The reason for the extra 20W becomes apparent when looking at the specs. Out of the box the card operates at a boost frequency of 1,785MHz (75MHz above FE) which can be pushed to 1,815MHz via GPU Tweak II software. Boost speeds don't always correlate with in-game frequencies, however, so don't expect absolutely linear improvement over reference speeds. The 10GB of GDDR6X memory, meanwhile, is left at 19Gbps. Shame, that.

Most of the weight resides in the massive heatsink engulfing the PCB. The width is not out of the ordinary but the height is what pushes it into nearly three-slot territory. Asus takes matters a step further than last year by having a dedicated heatsink for the memory. Unlike the FE, there's no obvious restriction on PCB space, so we have a standard arrangement of dual 8-pin power connectors near the left. A small red LED lights up if the two plugs are not functioning properly.

The sole concession to the RGB crowd is the emblem on the left. It lights up to a colour of your choice, controlled by the Aura software, and has a slim lightbar just above it, as we look. The effect is well done without being overbearing.

Flipping it around shows the cooling in action. Six thick heatpipes wend their way through the aluminium fin-stacks and converge at the base plate that, Asus reckons, is its flattest yet. We have no way of corroborating such claims other than by looking at how well the cooling apparatus is able to wick away the 340W TDP.

Though much of the air does come out of the back, we'd prefer a closed design that doesn't provide hot air the opportunity of remaining in the chassis too long. Asus sees it differently. Contrary to some of the competition, the company also feels no need to provide a supporting bracket in the package, instead relying on the rigidity of the card. We noticed no sag in our test system.

Dual HDMI 2.1 and a trio of DisplayPort offer decent flexibility, though bear in mind that the card can drive four displays at once, not five. Asus says that each card goes through a 144-hour stress test before being certified TUF enough for sale and touts a new I/O bracket with over twice the tensile strength of a normal one. Such implicit reliability and toughness doesn't translate over to the warranty, which remains an industry-standard three years. We'd really like to see five on this model.

The non-OC version of this card, which is materially identical, retails at a Founders Edition-matching £649. This OC, meanwhile, fetches £689. That's actually very reasonable for Asus pricing which tends to be on the higher side for AIC cards. We already know that RTX 3080 cards don't have much frequency headroom on the core so the prudent buyer will veer towards the non-OC part and save themselves enough cash for a couple of decent games. Even so, let's see what this OC card can do in the benchmarks.