The vital specs are muscular, with thoroughly handsome GFLOPS throughput and class-leading memory capacity and bandwidth.

Announced to much fanfare at CES 2019, AMD reckons it is back in the premium graphics-card game with the Radeon VII GPU.

The method by which the red team goes toe-to-toe with the Nvidia GeForce RTX 2080 is disarmingly simple: it takes the existing machine-learning, Vega-based Radeon Instinct MI50 card, massages the frequency a bit, and encases it in a new, gamer-orientated cooler.

The vital specs are muscular, with thoroughly handsome GFLOPS throughput and class-leading memory capacity and bandwidth. The sum of these changes improves the Radeon RX Vega 64's performance by around 25 per cent, which is particularly telling at QHD and UHD resolutions.

Though undeniably the fastest, best-looking gaming card AMD has ever produced, the need to crank up frequencies results in a brute-force approach that causes the card to run hot and annoyingly loud. In contrast, the rival RTX 2080, starting at the same asking fee, is a fundamentally more refined package and, for what it is worth right now, has raytracing and image-quality features that AMD doesn't.

Bottom line: solid in performance yet lacking in other areas, the AMD Radeon VII is hard to recommend in the face of a plethora of RTX 2080 cards that are, on balance, better in most regards. 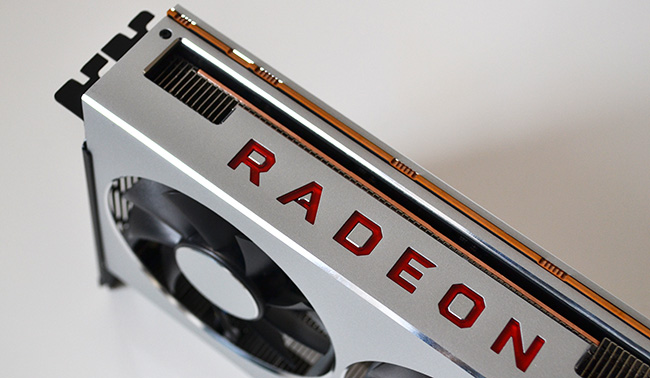 The AMD Radeon VII graphics card is available to purchase from Scan Computers.

To try and ensure Nvidia don't own the graphics card market? I deliberately chose an rx480 vs a 1060 for this very reason (and on the suspicion it would age better as AMD card usually do). Gaming on a PC is already stupidly expensive and nvidia having a free hand is something I'd pay to prevent.
Posted by philehidiot - Thu 07 Feb 2019 16:00

1080Ti is an old, old design and will be very much second fiddle in the driver's development stakes going forwards especially as RTX, etc needs so much work doing on the software side. It's just too old and whilst you might make an argument for some compute tasks which need all that VRAM, you'd be silly to ignore the Radeon VII for that. Why? Aside from 16GB HBM, just look at the FP64 throughput. Combined with Nvidia's driver T&Cs potentially making commercial use of consumer products a problem (depending on the implementation) and you have a good argument to go red here. That said, if you're looking at datacentre level use where power hunger and the T&C I'm thinking of are coming into play, you're probably looking at professional cards anyway.

Why over a 2080? Good question and it's going to probably come down to pricing in the end. Nvidia will probably end up putting too much value on RTX, etc whereas us consumers don't really care right now. As a result, Nvidia might be more reluctant to drop their prices (indeed, they've already dropped a bit since launch and all that early-adopter gutting) whereas AMD might be willing to drop their prices a little further, especially as they're mirroring their pro series cards and therefore can benefit from economies of scale to some degree (although given relative market share this is probably just an essential if they want to compete at all rather than an advantage).

There's also the “up yours” to Nvidia and their recent business practices that led me to buy a Vega64. I got it reasonably cheap (£440, went up to ~£600 for the same model soon afterwards and my total cost to change was ~£300) given the market and frankly, I've seen nothing from either side in this latest round of releases that have made me regret my purchase. The ONLY issue I have with this card is the noise. But it rarely matters when playing games as I've either got the volume up on speakers or headphones on. Is the fan curve too aggressive? Almost certainly but it keeps it running cooler and as you say, these things run hot so reducing the degree of thermal shock would always be sensible if you want the card to last. I can imagine this noise would be a big problem for some people but I tend to be able to tune it out.
Posted by Spud1 - Thu 07 Feb 2019 17:42

Indeed, the reviews have come out exactly as expected…well may not quite exactly - I really didn't expect these to be loud as well given the cooler, but hey ho. I would replace the word “anyone” with “most gamers” however, as there are some edge cases where you are better off with one of these (if you exclusively play Vulkan optimised games for example, or have a real need for 16gb of memory on your graphics card, or have an irrational hatred of Nvidia :) )

If they had released these at even just £50 cheaper….it would be a different story. They didn't though and instead have gone toe to toe with Nvidia's Non FE pricing.