AMD's Zen 2 architecture moved the needle with respect to performance for servers, desktops and laptops. Through a combination of refined architecture and shift down to a space- and energy-saving 7nm process, the latest iteration of AMD chips have shoehorned more of just about everything that matters.

3rd Gen Ryzen 7 and Ryzen 5 continue to harness the core-and-thread count of previous generations, making them easy to understand from the consumer's point of view. The final recipients of the latest-generation IGP-less makeover are a pair of Ryzen 3 chips, released today, and going by the names of 3300X and 3100.

Wending our way down silicon memory lane suggests this pair ought to be, like their older brethren, 4C4T chips imbued with Zen 2 muscles. That's not the case, as for the first time, Ryzen 3 gets simultaneous multithreading (SMT) capability. Both chips, therefore, house four cores and eight threads yet still retain the Ryzen 3 branding and Zen 2/PCIe 4.0 blueprint. Why? The reason has most to do with how Intel is building out its rival 10th Gen Comet Lake chips, released into the wild soon, and this SMT strength so far down the stack is AMD's pre-emptive strike for the mainstream CPU market. Let's take a closer look.

And being the latest generation is a sure-fire way of increasing the amount of on-chip cache. As you may recall from the 3rd Gen architecture, each CCX - there are two within a CCD - carries with it 16MB of L3 cache. That is the least amount AMD can use without resorting to some proper castration. Both Ryzen 3s dutifully follow the plan and go with the requisite amount. Housing only four cores makes it easy for them to fit inside a 65W envelope, too, which can further be lowered to 45W by an OEM through a configurable TDP.

One may presume that higher frequencies is all the 3300X has over its little brother - you receive an extra 400MHz top-end speed and higher all-core turbo. That's not quite the whole picture, however, because of the way the 3300X is constructed interally.

AMD chooses to accommodate all four cores and eight threads into a single CCX (it can actually hold eight cores, so there's some snipping at the factory). The 3100, meanwhile, pulls together two cores in the dual CCXes contained within a CCD, along with 8MB of L3 each, to present the same 4C8T 16MB topology to an operating system.

Why has this been done, and what ramifications does it have for performance? Two good questions. The why is answered by the fact that Ryzen 3 3100 really is the runt of the silicon litter; AMD uses whatever doesn't make the grade anywhere else, and it's easier having two working cores per CCX - a 2+2 configuration - than four. Ryzen 3 3330X, meanwhile, adopts better silicon, one would presume, and having everything housed in a single CCX is more beneficial - a 4+0 configuration - for reducing core-to-core latency (communication is not moving between CCXes) and for tapping into the full 16MB of L3 cache. 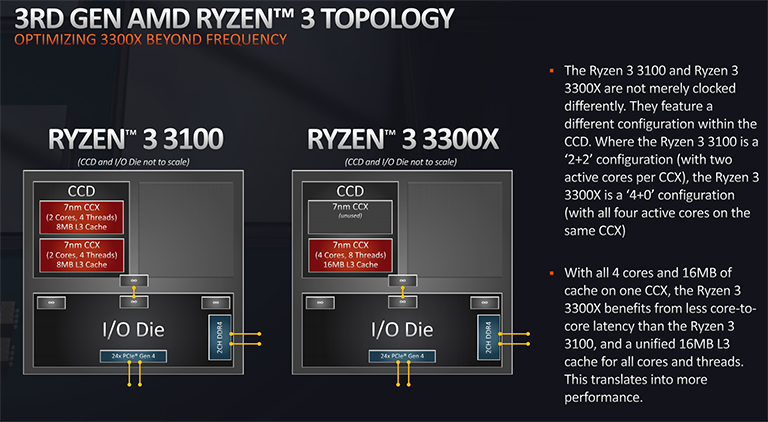 Knowing this, we'd recommend users pony up the extra $20 for the Ryzen 3 3300X; it really is worth it for those that want a fit-and-forget solution without the need for overclocking. Both chips ship with AMD's capable Wraith Stealth cooler in the box.

AMD's also launching a new supporting chipset known as B550. Due for release on June 16, 2020, it's a nice upgrade over incumbent B450. The conduit between CPU and primary graphics is upgraded to PCIe Gen 4, as is processor-connected storage, and being Ryzen 3 compatible, boards also have USB 3.2 Gen 2 emanating from the chips. Last but not least, B550 introduces dual-graphics support, as well.