AMD made an important announcement last week regarding plans in the high-end desktop (HEDT) space, comprised of 16-core Ryzen and 24- and 32-core Threadripper chips. Though of little surprise to most observers, today marks the day when Ryzen 9 3950X comes out to play.

Priced at $749 (£700+), Ryzen 9 3950X reinforces AMD's lofty ambition for the mainstream AM4 socket - one that scales from entry-level dual-core chips (A6 9500) costing no more than £30 right the way through to the 16C32T champion we have before us. So, cutting to the chase, how does the 3950X fit into the wider Ryzen landscape? The usual table tells us plenty.

As a quick recap, Ryzen 9 uses the latest Zen 2 architecture built on a leading-edge 7nm process. These two defining attributes combine to offer up to 16 cores and 32 threads in a CPU-only package with a 105W TDP, which is a feat that rival Intel cannot match.

Underneath the heatspreader reside two CPU complexes, known as CCDs, and each is in turn home to dual CCXes that house four cores and eight threads, 2MB of L2 cache, and 16MB of L3 cache each. Doing the math gets us up to the total 16C32T of the Ryzen 9 3950X, along with a chip-wide 8MB of L2 and 64MB of L3. Each CCD has a high-speed Infinity Fabric link to a centralised I/O die built on a more mature, less expensive 12nm process.

All 3rd Gen Ryzens share the same I/O die, and AMD decides how many CCXes to pair it with, leading to models with six, eight, 12 and 16 cores, all with SMT in tow. The important takeaway is that Ryzen 9 3950X is the absolute full implementation of this approach on the AM4 socket. Any user wanting more cores needs to take a good look at Threadripper or 2nd Gen Epyc, depending upon workload and budget.

It is usual to reduce frequencies as core counts scale. It is therefore impressive that Ryzen 9 3950X is imbued with a 3.5GHz base clock and 4.7GHz boost frequency. Environmental conditions and cooling capacity generally dictate the exact speed at which a chip runs a particular workload at, though it is reasonable to assume that, given AMD is using the finest Ryzen silicon for this product, one ought to see close to an all-core 4.0GHz on air. 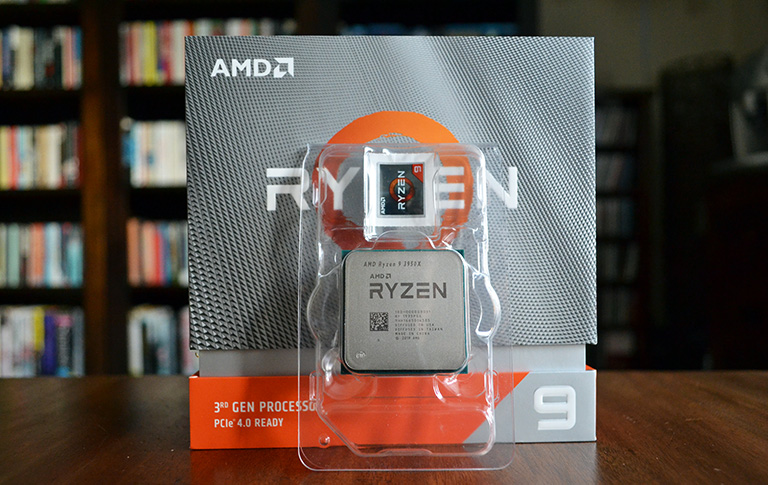 AMD has taken the interesting step of not bundling a cooler with the range-topper. The reasoning is simple enough: those with pockets deep enough to purchase it won't mind re-using extant solutions or investing in some high-quality liquid cooling. It is reasonable to put at least 10-15 per cent of the chip's budget aside for this purpose, bringing excellent coolers such as the Noctua NH-D15 into play.

If you want to use it in smaller chassis with restricted airflow, AMD enables an eco mode that drops the TDP from the default 105W to 65W, stifling performance by around 30 per cent in heavy-load tests. Quite why you would want to do that when a Ryzen 7 3700X is already available with that power budget, more cheaply, is harder to appreciate. You buy this chip to run all cores and full speed, we reckon.

Ryzen 9 3950X serves to extend the performance potential of the already-available Ryzen 9 3900X by a notch or two, thereby putting even more pressure on Intel's mainstream Core i9 series, especially in applications that revel in pure grunt. Let's now put all this conjecture to the test as we run through our benchmarking suite.