...as an everyday workhorse for users who dabble in a bit of video encoding and light-load gaming, Ryzen 5 3400G is decent enough.

The Ryzen 5 3400G continues AMD's solid work in offering competent solutions for everyday computing. Applicable to a wide range of budget systems that don't need a full-on discrete graphics card present, this CPU+GPU processor's Zen+ and Vega heritage shines through when compared to rival Intel chips costing about the same as the £140 outlay.

Sure, there are compromises on both fronts, but as an everyday workhorse for users who dabble in a bit of video encoding and light-load gaming, Ryzen 5 3400G is decent enough. £300 or so will buy you this chip, 16GB of memory, a 256GB NVMe SSD, and an inexpensive B450 motherboard. The quartet combines to offer an amenable entry point into the PC space, with the opportunity of upgrading to discrete graphics as and when budget permits.

All that said, it's worth remembering that Ryzen 5 3400G is effectively a last-gen chip dressed up in new branding. In an ideal world we'd like to see the Zen 2 architecture employed on the CPU front and a Navi derivative on the GPU. Taken as it is, the Ryzen 5 3400G, priced at £140, offers reasonable performance through liberal use of older technology. 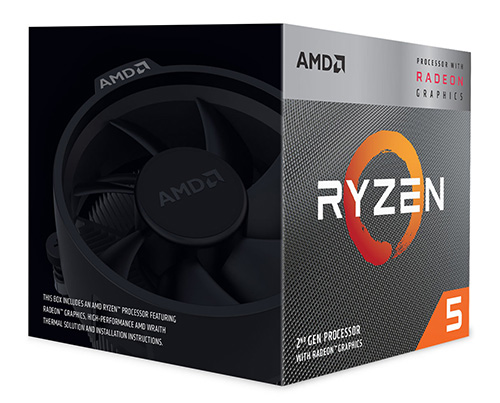 The AMD Ryzen 5 3400G is available to buy at Scan Computers.

20 Intel announces node renaming and roadmap to the Angstrom era

Posted by AETAaAS - Wed 09 Oct 2019 15:40
Would have been nice to get a comparison with the 2400G, to see if there is much to split the two, since the 2400G can be found for slightly less than the 3400G. One thing I have seen is that the new Spire coolers forgo the copper core which the previous generation had, compensating with higher fan speeds and noise.
Posted by Irien - Wed 09 Oct 2019 16:29
I have to say that I'm surprised that the gaming “minimum fps” is dropping so low on these parts. The text refers to muted base/boost frequencies, but according to the table, these should be 3.7 and 4.2 respectively which is hardly low. The 8100 is a 3.7ghz peak part, I think, by way of comparison.

I appreciate that gaming was always Zen+'s weak link, but it seems significantly behind the 2600x clocked at 3.6/4.2 albeit that the latter has two extra cores. I'm struggling to account for that, beyond 65w vs 95w, which suggests AMD is making a mistake not offering a 95w part, or else are purposely leaving the G-parts in a lower-performing bracket to protect the more expensive chips.

Or, could this be related to limited throughput for PCI-E graphics cards on the G-parts? I think that was a “thing” for the 2200G/2400G. Does that still apply for the 3400G? It has more PCi-E lanes, but do the motherboards accommodate that?
Posted by nobodyspecial - Thu 10 Oct 2019 11:57
Not even 720p with low settings yet? I expected more AMD.