In December last year Intel held its Memory and Storage Moment 2020 where it announced a number of products for consumers, data centre and enterprise customers. Yesterday it released its latest consumer SSD range which is dubbed the Intel SSD 670p range. These NVMe PCIe 3.0 storage solutions are designed to deliver "the right balance of performance, cost and power for mainstream gaming and everyday PC users." 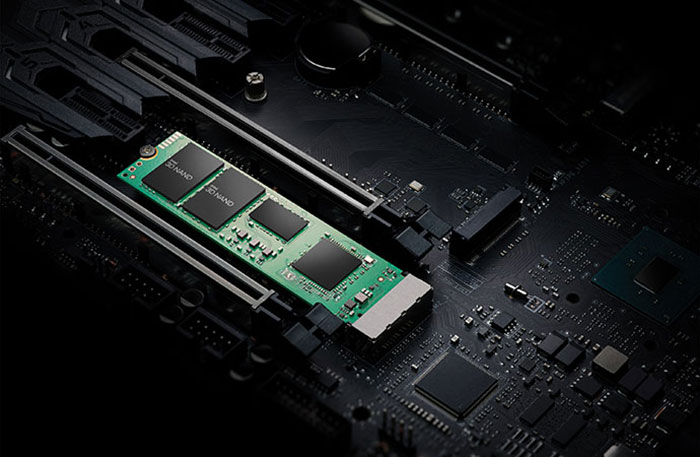 Intel claims various important generational improvements have been delivered with its mainstream SSD 670p range. Specific performance advantages over its predecessor are;

Additionally, Intel informs us that the SSD 670p series is "tuned for low queue depth and mixed workloads to meet the demands of today’s most common computing needs." 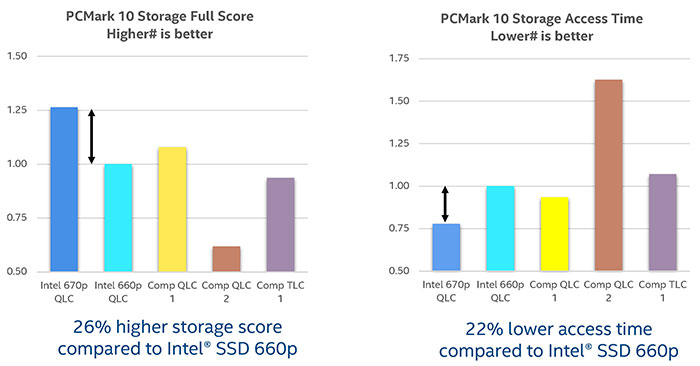 So, how does Intel deliver these performance uplifts? Unsurprisingly there is a mix of component technologies at play. Starting with the NAND, Intel is using its latest 4th gen 144-layer quad-level cell (QLC) NAND which is 50 per cent denser NAND than its predecessor used. Additionally, there is a new controller and firmware implemented here. Perhaps one of the most important changes though is the larger and improved Dynamic SLC caching, maximising the use of this fast NAND.

Below you can see the key specs of the Intel SSD 670p including capacities, performance, and other key metrics. The drives are available right now, depending upon your region, priced at US$90 for 500GB, $155 for 1TB, or $330 for 2TB. Intel's pricing seems a little high for the mainstream market, but I guess these launch prices will come down in due course. For example, its new SSD 670p 1TB offers the best absolute value of the new trio at 15 cents per GB terms which means you can comfortably find another brand's TLC NAND drive (and even PCIe 4.0 models) for less. 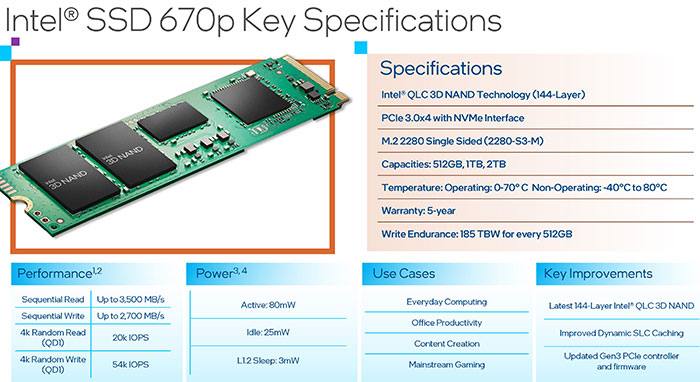 Posted by DanceswithUnix - Tue 02 Mar 2021 10:21
You would have thought by now they would be pushing 3D Xpoint technology, guess they still have bugs to iron out in that. At least a small Optane cache instead of or on top of the SLC area these use.
Posted by Tabbykatze - Tue 02 Mar 2021 11:48
Didn't they sell off their NAND dvision…?
Posted by LSG501 - Tue 02 Mar 2021 14:42
Well they seem rather lacklustre, they're not particularly fast in iops or straight up read/write and to top it off they're not exactly cheap…