Intel publically demonstrated its 3D XPoint memory as Optane over four years ago. Since that time it has updated many CPU/motherboard products and the memory has been used in multiple complementary products but it has always been based on that same first gen 3D XPoint. 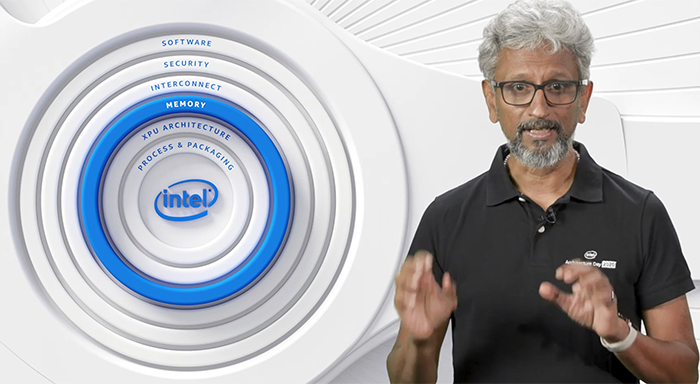 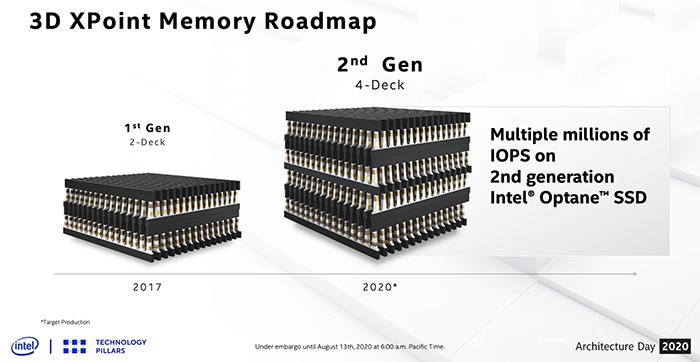 The 2nd gen Optane SSDs (codenamed Alder Stream) will have double the density, they will move to PCIe gen 4.0 and Intel's goal is to deliver greater than 2x performance with the new storage products. Optimisations for single sector reads implemented by Intel will deliver further reduced latencies. 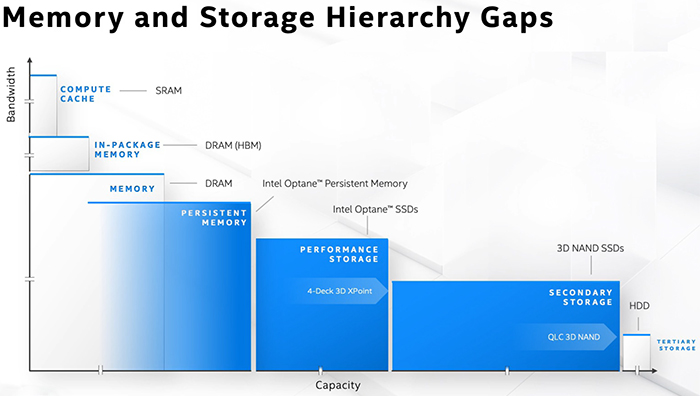 You can see in the chart above that the introduction of Optane 2.0 further closes the performance/capacity gap in the memory hierarchy.

After this part of the presentation Koduri goes on to talk about Barlow Pass Optane DC persistent memory modules, but these are based upon the first gen 3D XPoint memory with controller tweaks to deliver a more modest 25 per cent bandwidth increase. 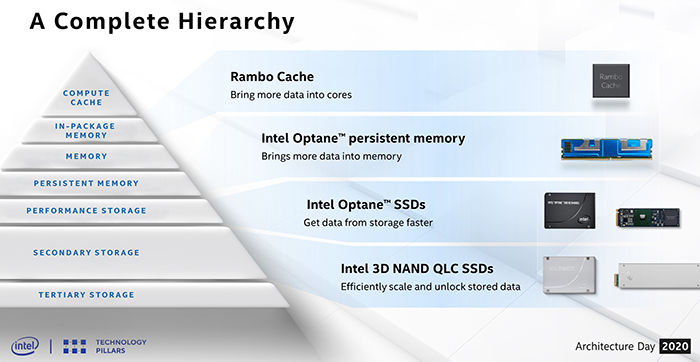 Before Koduri discussed 3D XPoint he gave a brief outline of Intel's strategy in other memory products. Specifically he said that Intel's 144 layer QLC 3D NAND was on the way, to bring SSD pricing down to better rival HDD storage, and it will debut in products before 2020 is out.

Posted by zaph0d - Fri 14 Aug 2020 13:44
Not that good considering it's supposed to be a cache between ram and drives if it's still based on nand flash, the write longevity's no going to be upto much. I'd rather wait for mram, at least that has the same kind of rewrite longevity as dram even if it's slower and is still pretty persistant.
Posted by DevDrake - Fri 14 Aug 2020 13:52
are there any advantages for SSD using Optane? I thought that MAND memory hit the barrier of SATA3 long time ago…

oh well this slide (bandwidth/capacity) tells me nothing, does that mean that optane persistent memory will have 40% bigger capacity and only 15% worse bandwidth?

DevDrake
are there any advantages for SSD using Optane?

hexxer
Does this work with non Intel CPUs already?

That was only a problem with the DIMMs AFAIK, there are plenty of SSDs out there and they should work on any computer should you want blistering storage on your NVMe modified Raspberry Pi 4.

OFC you would probably still be better off buying a truckload of conventional SSDs for the same money to give similar aggregate performance and way more storage.