You are here:
Storage Systems News

Coinciding with the release of a new Intel Optane Memory User Interface and Driver for System Acceleration download, Intel has quietly expanded support for its new memory paradigm to Pentium and Celeron-based PC systems. 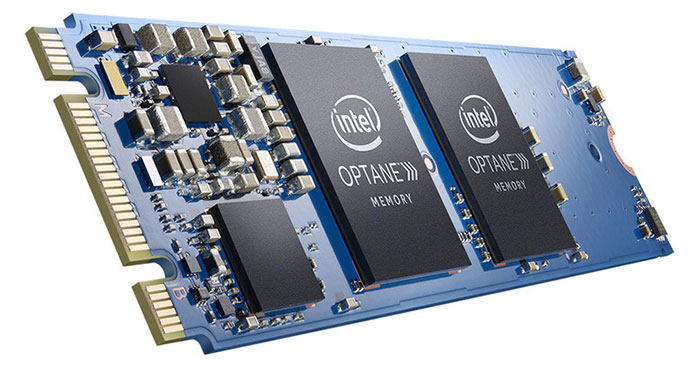 If you head on over to the download page, linked above, you will find that systems packing desktop Celeron and Pentium processors based on the Coffee Lake microarchitecture are now Optane Memory compatible (new driver spotted by AnandTech). There are a few other provisos; a compatible motherboard BIOS is required, users must have the Intel Rapid Storage Technology (RST) drivers version 17.2 or later installed, you will need Windows 10 64-bit, and the Octane Memory must be installed in an M.2 slot connected to the PCIe lanes of the chipset.

Intel Optane Memory might be a better fit for lower end systems based on Pentium and Celeron processors as they tend to be theose that more commonly come with 'spinning rust' HDDs installed. Tests have found that Intel's low capacity Optane Memory drives make the biggest difference to HDD-based systems, while most modern mid-to-high end systems will be stuffed with solid state storage of some kind or other. If you already have fast SSD storage, Optane Memory cache benefits will be less noticable if apparent at all.

Posted by PC-LAD - Mon 01 Apr 2019 15:06
This is definitely just intel testing the waters for a laptop release to drive more sales. On both optain and chips (despite the silicone not being available)
Posted by winactive - Mon 01 Apr 2019 23:42
Nah, this is Intel selling off go faster stripes before someone points out a security flaw.

And they've ended the Intel with Optane CPU bundles, it's a fire sale.
Posted by markih - Mon 01 Apr 2019 23:44
Does Optane really make a difference say for a gaming system with a mechanical drive and a M.2 SSD system drive? I'm just choosing a gaming laptop and Optane is on offer but I'm not sure whether to take the plunge.
Posted by lumireleon - Tue 02 Apr 2019 07:03

markih
Does Optane really make a difference say for a gaming system with a mechanical drive and a M.2 SSD system drive? I'm just choosing a gaming laptop and Optane is on offer but I'm not sure whether to take the plunge.

if you have an M2 SSD already optane will just be burning money, add more RAM instead.
Posted by DanceswithUnix - Tue 02 Apr 2019 07:53

markih
Does Optane really make a difference say for a gaming system with a mechanical drive and a M.2 SSD system drive? I'm just choosing a gaming laptop and Optane is on offer but I'm not sure whether to take the plunge.

Optane has been made too expensive so there always seems to be a better place to put your money.

A 1TB SATA SSD is about £90 now, which is big enough for a decent game collection and fast enough for good boot times.

Compare that to £31 for a 1TB HDD and £35 for a piddly little 16GB Optane memory and you haven't saved that much money for worse performance. So you need to be rocking a really big hard drive for it to make sense. OFC with more spinning rust you might want a bigger Optane stick to better cover it (what game fits in 16GB these days?) so that's £60 for the 32GB version or £140 for the 64GB version.

The rated performance of those Optane sticks seems pretty poor as well. A 290MB/s maximum write speed would be laughed at on even the cheapest SATA SSD these days, the 1200MB/s read speed is slow compared to an NVMe flash drive.

Optane is an interesting technology, but Intel haven't achieved the performance from it that they originally announced and when you couple that with the high pricing they demand I have yet to see any use case where it can beat a flash drive of similar price (from memory a 32BG Optane drive has about the same write endurance as a 500GB flash SSD).