Nvidia researchers achieved an interesting AI feat to tie in with the 40th anniversary of Pac-Man arriving in the arcades in Japan. Ahead of this classic pill munching ghosts in a maze game anniversary, the researchers trained a powerful new AI model called Nvidia GameGAN with footage of the game. The result: GameGAN generated a fully functional version of Pac-Man from scratch. 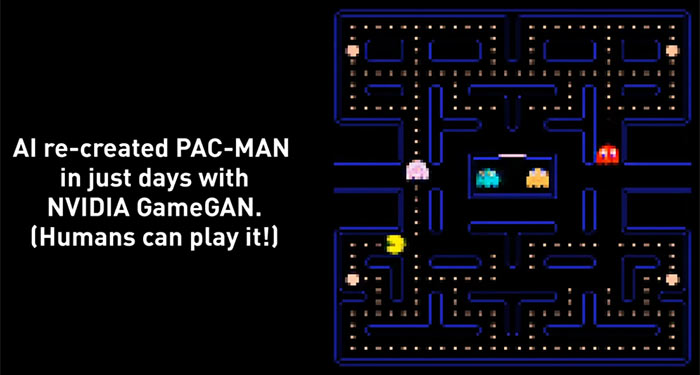 To prepare GameGAN for its game duplication tasks, Nvidia researchers fed the AI 50,000 episodes of Pac-Man gameplay. The AI processed this data and spat out a duplicate, a fully functioning game, without any reference to the original game engine. "That means that even without understanding a game’s fundamental rules, AI can recreate the game with convincing results," asserts Nvidia.

HEXUS has published news stories about GANs before. In AI, a GAN refers to a Generative Adversarial Network. Nvidia concisely explains that a GAN is made up of two competing neural networks, a generator and a discriminator. A GAN will help minimise human training input for AI as it pairs the creative generator with an algorithm that quality checks the output - the discriminator. "You can think of this being like a competition between counterfeiters and police," said GAN pioneer Ian Goodfellow, now a research scientist at Google.

The fully functional Pac-Man game is the "first research to emulate a game engine using GAN-based neural networks," claimed Seung-Wook Kim, an Nvidia researcher and lead author on the project.

Pac-Man publisher Bandai Namco were quite staggered with the GameGAN output, reports the Nvidia blog. The publishers pondered whether GameGAN could see some practical use in the gaming industry. For example it would be used to "accelerate the creative process of developing new level layouts, characters and even games".

Later this year you will be able to try out the Nvidia AI tribute to Pac-Man via the AI Playground, where there are a number of interactive demos of Nvidia AI technology already available.

Of course this research might well apply beyond the gaming environment. Nvidia goes on to talk about other AI projects it is working on like autonomous robots, simulators, and autonomous cars where GameGAN AI might be applicable.