Crytek revealed its Neon Noir real-time raytracing demo back in March this year. The stand-out feature of this demo was that it showed a hardware agnostic PC game engine that could produce appealing real-time raytracing effects on "most mainstream, contemporary AMD and Nvidia GPUs". An accompanying video didn’t disappoint. Now, this free graphical benchmarking software from Crytek has been released. 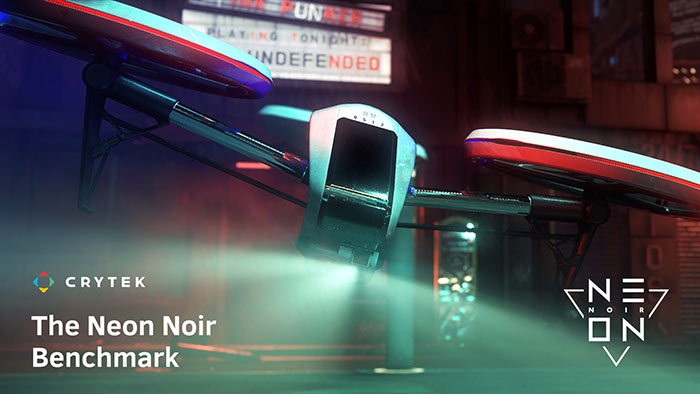 Before you go and download Neon Noir, it is worth checking out the minimum recommended specs for "the smoothest experience," however if your system is a notch or two down in spec don't let that stop you - its free to download after all (4.35GB).

With this release, Crytek has implemented a configuration setting so you can switch between Very High and Ultra ray tracing quality. As well as giving a fillip to lower end systems with the lower setting, it lets users see the trade-offs on their own system/screen when running such software.

Crytek says that Ultra settings render the ray-traced reflections at the same resolution as the scene. The resolution of reflection is lowered for the Very High setting "saving rendering costs, while still delivering a beautiful scene," says the software developer. For example with the Very High quality 'LowSpecMode' option toggled on a scene rendered at 1920 x 1080 will have 1357 x 763 pixel ray-traced reflections overlaid. 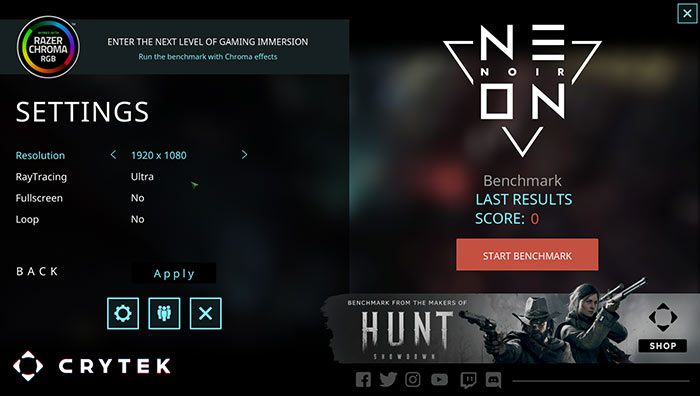 This demo is interesting for now, but what about games featuring the tech? Crytek says that the real-time raytracing feature as demonstrated will ship in CryEngine in 2020 and will be optimised to make use of the latest advancements of new graphics cards plus newer APIs like DX12 and Vulkan.

Neon Noir is available now via the CryEngine Marketplace (download size approx 4.35GB). If you click the reviews section of the linked page you can see that users have shared lots of benchmark scores / frame rates from a wide range of PC system configurations (from GTX 1050Ti up to RTX 2080 Ti, for example). Though free, you will need to sign up for an account if you don't already have one.

Crytek says that the real-time raytracing feature as demonstrated will ship in CryEngine in 2020 and will be optimised to make use of the latest advancements of new graphics cards plus newer APIs like DX12 and Vulkan.

So, does that mean this will, or won't, take advantage of the dedicated RT cores in my RTX GPU?

EDIT: The video says they don't use the RT cores. I wonder if NVIDIA will find a way of manipulating things to have these calculations done on the cores, otherwise they're a bloody big waste of expensive silicon so far.
Posted by Quartz - Thu 14 Nov 2019 15:47
I get near 60 fps at 4k with a 2080 Ti on the very high setting (big dip to 45 fps on the bullet casings) and ~10% less on ultra settings with a low of 37 fps on the bullet casings.
Posted by blokeinkent - Thu 14 Nov 2019 16:52

I know 60 fps is probably deemed good enough in most cases, but If they don't have specific routines to really leverage RTX, especially after a year of release, then what's the point in them putting out a demo of their a engine when somebody dropping £1500+ on a card like this can't cane it. It doesn't leave much hope for future titles.

Not bothering with simulating a 4K screen as i only have a 1080 screen, but i recon my 5700 XT will take a beating.