Amazon Alexa has been pre-installed for some time on select PC systems from the likes of Acer, HP, and Lenovo but now anyone with Windows 10 can install it. The app is available in the Windows Store, for PC users in the UK, US, and Germany (more countries coming in 2019). 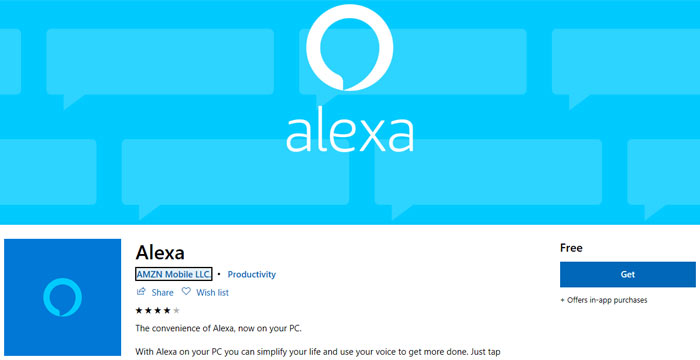 The Amazon Alexa app is said to bring “the convenience of Alexa” to your PC with its wide range of voice commands. You can do things like check your calendar, create lists, play music, check the weather, shop for Amazon stuff, and control smart home devices. It should work in a complementary fashion to Cortana but there seems to be quite a bit of overlap in functions. Remember that Microsoft and Amazon announced that they were going to get the two AI Assistants to talk to each other a little over a year ago, and now the fruit of the cooperation is available in this general release.

As the app has just become available you might not be surprised to hear that it isn’t quite as fully featured as an Amazon Echo device, for example. Reports suggest that Spotify and Pandora don’t play with PC Alexa right now. Furthermore, PCs often will not have the hardware to make hands-free ‘wake-on-voice’ work – instead a screen button or hotkey must be used to summon Alexa. 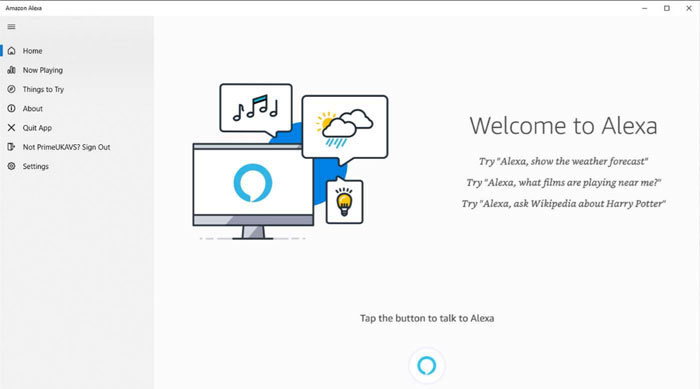 In the app settings you can toggle sounds to indicate when Alexa is listening, adjust the wake word (if supported by your hardware), and toggle auto-start. The Alexa app currently doesn’t support hands-free modes except for those with ‘tuned’ devices upon which it was pre-installed, like the Acer Spin 5.

Around 50,000 Amazon skills are available to Alexa users and Amazon promises some more PC specific skills are in the pipeline, which might be interesting. A final thing worth mentioning is that the new Alexa app for PC utilises Microsoft’s Fluent Design language with ‘acrylic’ panels, and Dark Mode options all present and correct.

ik9000
just as long as they don't make it essential part of using the website. My echo no longer echos. It is unplugged, never to be connected again. Maybe or maybe not in pieces after meeting a hammer.

philehidiot
May I ask why? I have a couple of Dots and despite my best efforts to make them spy, they don't appear to be doing so.

First, how would, or indeed could you know?


Devices like these, be it Echo, Cortana or whatever MUST be listening to everything said and done witjin range in order to work. Oh, sure, you can “mute” them, but then you say “Alexa” and nothing happens.

To work, they are always listening for the ‘trigger’, like Alexa. They then send an encrypted sound clip of what was recorded just before, and after, the trigger. That encryption stops nosy 3rd parties intercepting it (in theory, at least) but, by coincidence (or not, depending on your cyncism level) it also stops YOU from knowing exactly what was sent.

On arriving at Amazon's servers, the clip is decrypted, processed and a response zent back to you device, telling you what time it is, or playing your favourite Atomic Kitten or Jedward track, or whatever.

But, you may notice that I slipped that “processed” word in there, that is fundamental to Echo (etc) doing what they are designed to do. So precisely what does “processing” consist of? Doing enough to send your response, certainly, but given big corporation's penchant for gathering every last byte of data on us that they can, from your Google history to your phone's contacts to GPS data, do you really, really think they're going to ignore the chance to data warehouse analytics of your Echo commands? Really?

Do they store your voice clips? I don't know, but I doubt it. Do they store any data they consider relevant extracted from your usage? Again, I don't know but I'd be stunned ifcthey didn't?

Do you care? Presumably not.

But given that any such anslysis and/or recording is done on Amazon servers, as part of stsndard functioning, how could you possibly notice if they're doing it, let alone what they're doing?


Then, we csn slip into tinfoil hat territory.

Suppose I'm the Director of the CIA, or worse, NSA, and I tell my tech teams “Intercept all Echo data”, store and decrypt it" do you feel certain that they couldn't either intercept net traffic (I'd bet my left nut they can, and do where they want to) and/or decrypt it?

Or that they couldn't remote-enable that microphone, at will, trigger-word or not?

Unfortunately, I'm not the director of either, so I don't know either. But, what about Chinese intelligence? Russian? Or a number of other state agencies or any one of a host of criminal hacking groups.


What makes you think that if some form of spying is going on, you coukd possibky notice?


One thing, and pretty much only one thing, is certain …. if you don't have one, it isn't being used to sp…. let's call it ‘data-gather’ on you, thst being a less loaded term. But if you do, you cannot know what's being done with it, even if it operates 100% as intended, let alone if it doesn't.

Zak33
Saracen… all your dreams have come true :D

Ha. Actually, I don't care. I'm never likely to use either, so it really doesn't bother me.