A typical GAN is said to consist of a generator and discriminator (aka critic). Thus a sample image is produced by the AI and the critical function subsequently discards images that don’t fit the quality required. Once the system is trained then the discriminator isn’t required anymore. 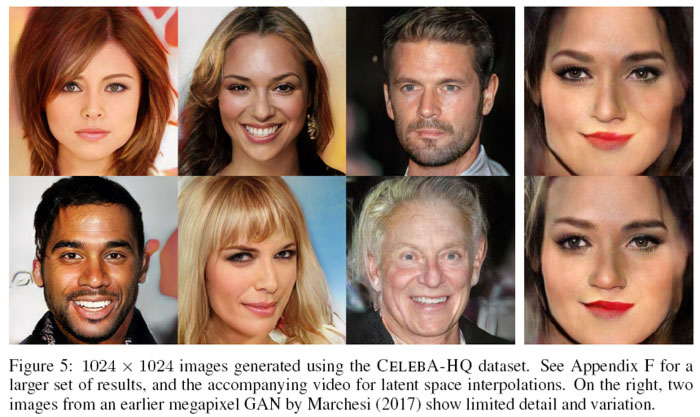 With Nvidia’s GAN, progressive training is used, so unsuitable images are weeded out earlier in the process and increasing resolution in multiple steps allows layers of facial features to be faded in smoothly. The Nvidia researchers found that the new training method ended up producing good high-res results two to six times faster than previous methods.

A video was produced to accompany the research paper and is embedded above. As you can see, the AI learnt initially from real photo 1024 pixel square images of ‘celebrities’. If you follow the video you will then see various AI methods applied for improved quality, stability and variation. It is recommended by Nvidia’s Tero Karras, the video clip uploader, that you play back the video in full screen at 1080p.

As noted by TNW, AIs can now mimic voices, animate our faces in speech and much more. The lifelike images of fake people show interesting scientific progress but may eventually be used for benign or malevolent purpose. On the good side, the tech can generate convincing NPCs in computer games and characters for animations, but on the negative side might be used for proliferating fake IDs and social media profiles etc in the cyber cold wars that have already begun.

Ttaskmaster
Ah, but can it run Crysis?

Doubtful, but it could well contribute to an altogether different kind of Crysis
Posted by Bagpuss - Fri 03 Nov 2017 13:32

Bagpuss
We have Hollywood actors to fill that role, we don't need software engineers adding to it.

True, but you don't have to pay an anonymous body double millions per film, and/or write off millions if your big name star walks out, or worse, dies, halfway through and $50m into a major production. You can also have further episodes in a hit franchise after a star quits, or grows too old, fat, etc.

It'll save on stunt doubles, too.