Razer has launched its new Razer Nari Ultimate wireless gaming headset with Razer HyperSense. This premium wireless headset is one of three launched to form the Razer Nari family today.

Razer Hypersense is a key differentiator for the Razer Nari Ultimate wireless gaming headset. It provides "advanced haptics to deliver a deeper immersive experience for gaming, movies and music," says Razer. Behind the Razer branded tech is a firmware/hardware haptics system designed by Lofelt, a leading German technology company that specialises in creating intelligent haptics for immersive, natural tactile experiences. 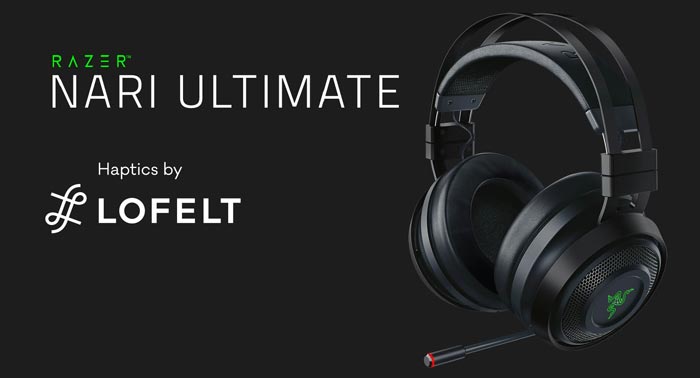 According to Lofelt, its haptics system raises the bar to provide sensory feedback "to match the high-quality audio and video we’re used to in today’s devices". The haptic feedback drivers built-into the Razer Nari Ultimate are described as multidimensional with stereo capabilities for enhanced positional awareness. The hapics system doesn't need integration with games titles, for example, and can work across gaming, music, entertainment and movies by analysing the audio signals in real-time. 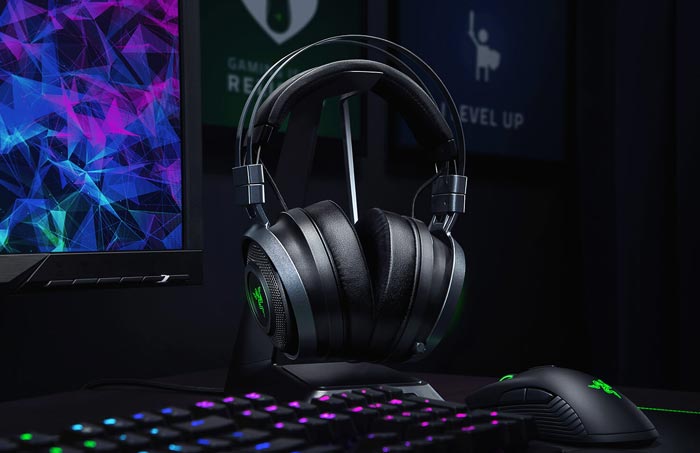 Moving on to other features of the Razer Nari Ultimate, for comfort it has been built with an auto-adjusting headband, swiveling ear cups to fit every head shape, and cooling gel ear cushions. The ear cushions have hidden indented eyewear channels.

Razer leverages its patents portfolio by including THX Spatial Audio, as also featured in the Kraken Tournament Edition. It is explained that THX "creates realistic depth and immersion by simulating 360-degree sound with pinpoint accuracy for greater awareness during gameplay." 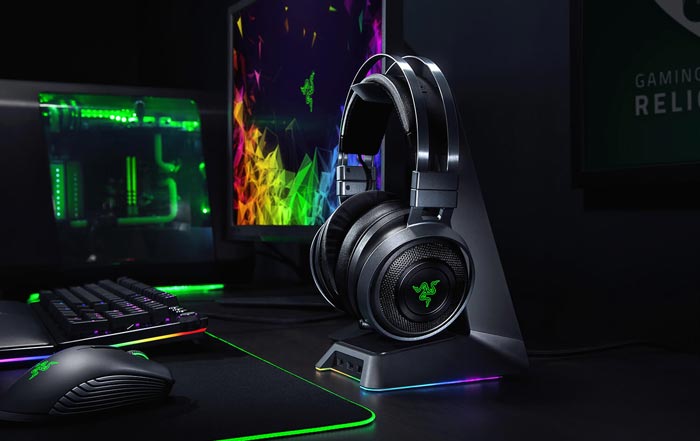 This new wireless headset will run for 8 hours with Razer Chroma lighting and HyperSense on a single charge. Runtime extends to 24 hours without the RGB LEDs and haptic feedback turned on. For more detailed and tech specs of the $199 Razer Nari Ultimate please head on over to the linked official product page which includes key info about the headphone audio, microphone, and so on.

Razer announced three versions of the Nari gaming headset today. The Razer Nari, at $149, omits Razer HyperSense but is otherwise identical to the Ultimate version. The Razer Nari Essential focuses on core wireless gaming headset features with THX Spatial Audio, comfort with an auto adjusting headband, and cooling gel ear cushions and lag-free performance and is priced at $99.99. Razer has provided a Nari headset comparisons page here to make the differences absolutely clear.

For gaming the haptic feedback sounds pretty awesome.
Posted by Andi-C - Sun 30 Sep 2018 21:28
The last Razer headset I listened to were horrible ! The bass was drowning all the other sounds.
No for me, I'll be priced out anyway.

Sennheiser FTW
Posted by Ttaskmaster - Mon 01 Oct 2018 13:04
Razer sound quality, or lack thereof, combined with a buzzing rumble upside your head?
No thanks.

A lot of what they're raving about is best done with a higher ‘impact’ on the sound, rather than a buzzing, bassy vibration. The only real exception is if you're watching a YouTube vid of a rave or some Kev's car with the boot speakers cranked up too high.
Posted by PC-LAD - Tue 02 Oct 2018 16:29
WoW, this should be of little effect on the markets options for wireless headsets
Posted by Stu C - Sun 14 Oct 2018 08:58
That Sound Guys review is terrible! They only talk about the sound at the very end of the review, and don't make any mention about bass quality!

It seems these headphones rely on bass for the haptic, but bass intensity is an interesting thing with gaming headphones… I use Beyerdynamic MX300 headphones which are relatively light on bass (it is still there, just not like many headphones on the market), thus I can hear footsteps over explosions (good in online FPS) and I don't get heating fatigue during long gaming sessions. I admit though that slightly more bass is nice in driving games and single player games, but fatigue is still a factor… That said, I have a set of Audio Technica headphones for those games.

My point is, what sound profile is best for gaming, and should gaming headphones offer different selectable sound profiles?