Researchers at University College London (UCL) have set a new world record internet speed using a technology that makes use of existing optical fibre cabling. The headlining speed achieved was 178Tbps (or 178,000,000 megabits a second), which is fast enough to "download the entire Netflix library in less than a second," according to a UCL blog post. This headline speed is a fifth faster than the previous record set by a team in Japan and approx twice as fast as the best internet connections available today.

Importantly, the researchers used existing fibre optic cabling for their world record 178Tbps data transfers. Upgrading such cables can cost up to £450,000 a kilometre in urban areas, so naturally developments seek not to replace them. However, there would be a cost to upgrade the amplifiers which are located at intervals along such cabling (every 40 to 100km) - at about £16,000 per amplifier.

To facilitate the speed boost the researchers at UCL, lead by Dr Lidia Galdino and working alongside engineers from Xtera and KDDI Research, transmit data over a much widers spectrum of light than typically used nowadays. The UCL blog post explains that "current infrastructure uses a limited spectrum bandwidth of 4.5THz, with 9THz commercial bandwidth systems entering the market, whereas the researchers used a bandwidth of 16.8THz". 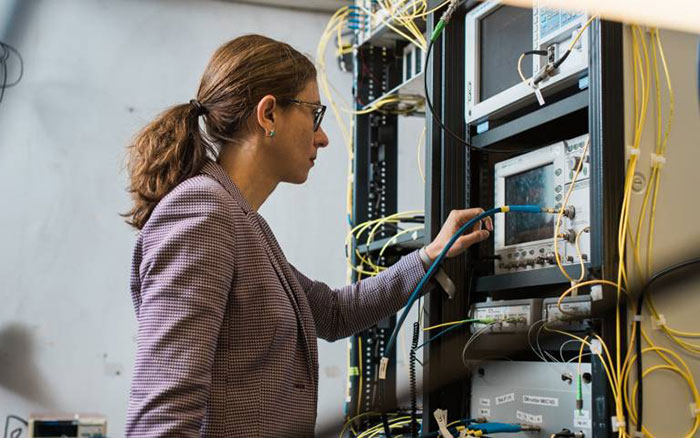 For the upgraded system to work the new amplifiers need to boost signal power and maximise speed via new Geometric Shaping (GS) constellations which manipulate phase, brightness and polarisation properties of the light to optimise for data transfers at speed.

Dr Galdino put the speed achievement into perspective, saying that current state-of-the-art cloud data-centre interconnections are capable of transporting up to 35Tbps. She added that such progress was crucial to lower costs and meet future data demands for transformative applications.

DevDrake
netfix got less than 22TB of stuff ? Suprising

DevDrake
netfix got less than 22TB of stuff ? Suprising

“They use 36 drives that can hold about 100 TB of data. These servers are capable of storing and streaming between 10,000 and 20,000 movies simultaneously. Netflix has about a thousand of these spread across the globe”
https://blog.uptrends.com/technology/binge-watching-how-netflix-content-is-stored-and-streamed/
Posted by lumireleon - Tue 25 Aug 2020 07:39
or Netflix super compresses their videos using propriety software then ‘un-RAR’ them on the fly using powerful CPUs/GPUs
Posted by 3dcandy - Tue 25 Aug 2020 10:10
I would imagine it's not an exact figure for the whole Netflix library. I mean it's also localised isn't it. I've heard the 100 tb figure bandied around before though so I reckon around 100 tb of localised storage is about right. I would also imagine it's 100tb compressed as compression usually takes longer than decompression.