A team of physicists based in the UK, Germany, New Zealand and Canada have described a new technique which could overcome current difficulties with using twisted light data transmissions across open spaces. So called twisted light adds extra data to photons by passing them through a hologram and has been previously demonstrated as a method to boost data transfer over optical cables. However, air transmission has been more challenging as “even simple changes in atmospheric pressures across open spaces can scatter light beams and cause the spin information to be lost,” explains the University of Glasgow news blog.

In particular the scientists have been testing optical angular momentum (OAM) techniques with varying phase and intensity. The team chose a ‘real-urban environment’ passing 1.6km over fields and streets and nearby high-rise buildings in Erlangen, Germany. 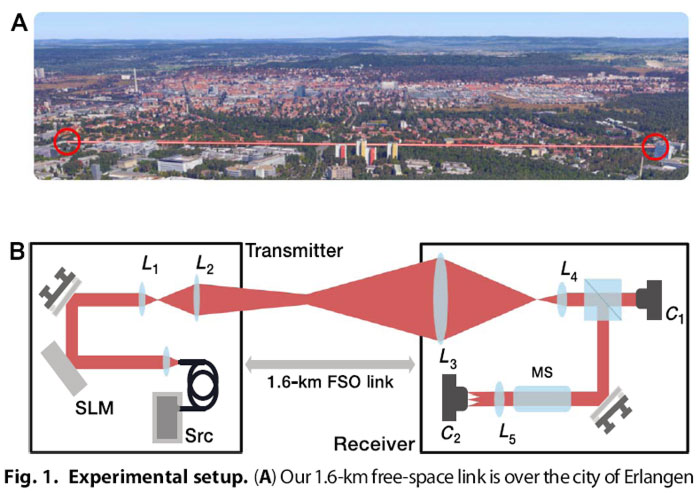 “Free space optics is a solution that can potentially give us the bandwidth of fibre, but without the requirement for physical cabling,” said Dr. Martin Lavery, head of the Structured Photonics Research Group at University of Glasgow, and the lead author on the team’s research paper. “This study takes vital steps forward in the journey towards high dimensional free space optics that can be a cheaper, more accessible alternative to buried fibre optics connections.”

The free space link tests in an area with interference from such factors as turbulent air highlighted the fragility of shaped phase fronts, particularly for those that would be integral to high-bandwidth data transfers. From the tests the scientists are now confident that they can adapt the transmissions with channel modelling, adaptive optics, or precorrection techniques to overcome the real world urban point-to-point transmission challenges. 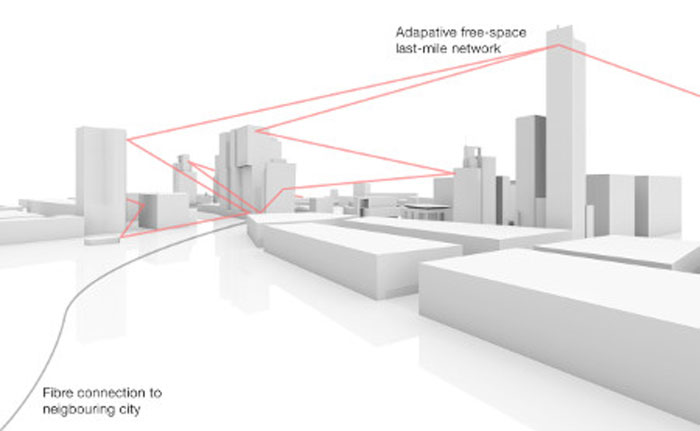 In the diagram above you can see how the scientists wish their inner city networking plans to pan out; with optical fibre connections between cities and adaptive free-space transmissions over the last mile.

peterb
Interesting artice, but I wonder what happens in fog, heavy rain or snow?

zsde
Probably the same that happens to mobile signals in the same conditions. The signal quality deteriorates.

“They send this information out, I mean it's just beamed out all over the damn place. You just gotta know how to grab it..”