One of the first things you will decide on when you go shopping for a laptop will be the balance between portability and screen size you will be happy with. Typically, modern laptops come with screens as big as 17.3-inches in diagonal, though there are some exceptions. If you are a special case and definitely need more screen space than a single 17-incher will provide there are various portable second screen solutions available which will add another laptop sized panel to your kit bag and weigh in at under a kilo. Another potential option, shown off at CES 2017, was Razer's Project Valerie, a triple G-Sync display laptop with three 17.3-inch 4K displays but that device never officially made it to retail. 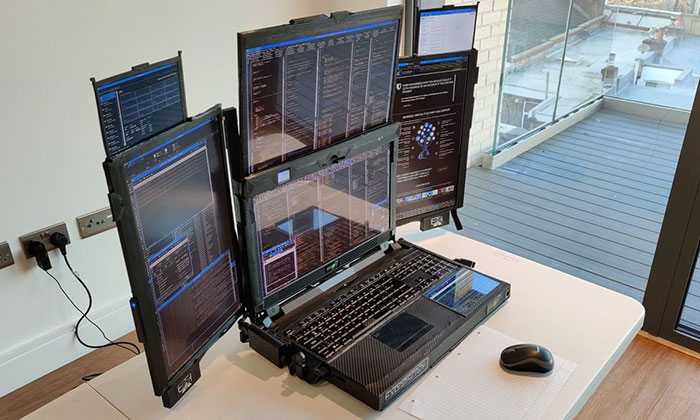 Expanscape's Aurora 7 Prototype appears to take the quest for portable screen space to its extremes by packing in seven substantial laptop screens into a single design. From the name, and this article heading you already know that the Aurora 7 packs in seven screens. These are; 4x 17.3-inch 4K panels and 3x 7-inch 1200p panels. All of these panels fold out from a 'neat' laptop package and other than the obvious origami action, no fiddling with connectors, settings, mounts and so on is required. Actually there is another screen in this laptop, a mini system status touch-screen is situated in the palm rest area.

Other key specs of the Aurora 7 are not really outlandish, other than the batteries and weight of the device. Expanscape says the Aurora 7 is based upon a heavily modified ODM laptop with an Intel Core i9-9900K CPU at its heart. Expanscape chose an Nvidia GeForce GTX 1060 series GPU for the graphics. The system can come with up to 64GB of DDR4, has room for 2x M.2 NVMe drives plus 2x 2.5-inch SATA drives, triple Gigabit Ethernet ports, plus twin Wi-Fi Bluetooth, lots of USB options, webcam, HDMI out, stereo speakers with subwoofer, and various audio I/O.

At this time the prototype uses two batteries, an 82Wh unit for the system, and a 148Wh battery pack for the screens (not currently aviation friendly). It seems to be that the longest you will be able to run this laptop without a charger is just 1hr, with the Core-i9 clocked down to 2GHz max. Expanscape says that the system has two PSUs, a 19.5V 16.9A unit and a 19V 3.62A unit. Folded up the laptop measures 51 x 34 x 11cm. Total system weight is said to be 12kg, but I'm not sure if Expanscape is including the power bricks in that figure.

Pricing is yet to be announced by Expanscape. It is making an early version of this machine available to enthusiasts, dubbed the A7 M3, for those that can't wait for the ongoing design refinements to complete.

My final thoughts are about whether this is better than getting a compact laptop and checking in a big monitor with your luggage for your travels. A quick look reveals that a typical boxed 32-inch 4K monitor is approx 6kg. Hopefully for London-based Expanscape, its target market of DevOps, SecOps, CyberSecurity and Day, Stock, Commodity Trader communities find particular appeal in this 7-screen laptop design.

This thing looks ridiculous, like something you only see in Cyberpunk graphic novels or being used by the geeky super-hacker characters in films…
In fact, that's the main reason I want one!! 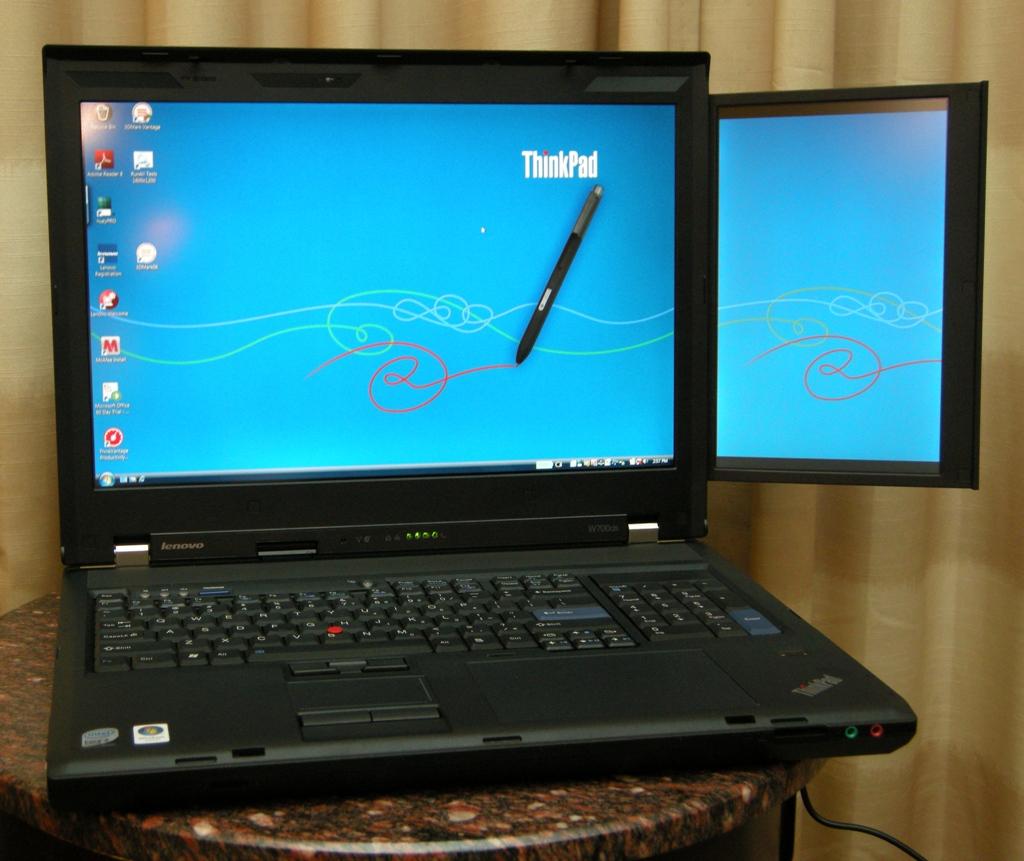 On the other hand that novelty was ‘only’ 5kg!
Posted by virtuo - Mon 08 Feb 2021 12:39
Imagine unfolding this beast on a train, can just hear Billy Mays in the background screaming “But wait, there's more!”

I do think as foldable/rollable screen technology matures, you'll start seeing laptops that roll out a single ultrawide screen from a standard 16:9 panel. That's going to be interesting.
Posted by Wirko - Mon 08 Feb 2021 13:28

virtuo
Imagine unfolding this beast on a train

A yearly cargo ticket better be included in the price. (if they intend to sell this lap-top)
Posted by wazzickle - Mon 08 Feb 2021 14:29
Why though