You are here:
Industry Systems News

In its blog post about the update the PCI-SIG was pleased with the progress which it had made even with the restrictions imposed upon its members due to the current pandemic. Over recent years the organisation has been speeding up its timeline for new version introductions. PCIe 3.0 was released back in 2010, with a long wait before PCIe 4.0 was finalised in 2017 - and this is only now becoming mainstream. PCIe 5.0 was finalised in 2019 and PCIe 6.0 is on track for being finalised in 2021.

Official highlights of PCIe 6.0 are as follows: 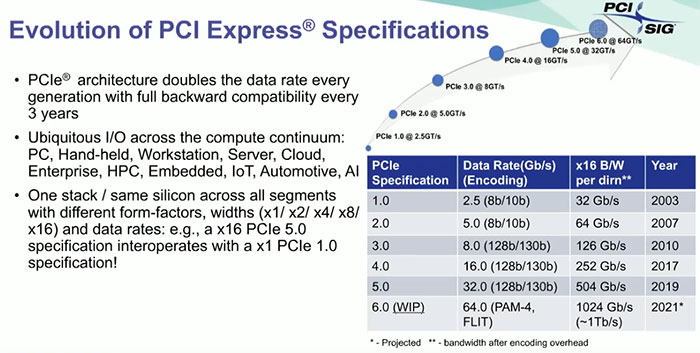 The doubling of data rate is well established on previous roadmaps so isn't a surprise to see. PAM4 encoding is said to reduce channel loss by running at half the frequency with two bits per Unit Interval. For more info on PAM4 you can check out the blog post by Debendra Das Sharma, PCI-SIG Board Member and Intel Fellow. 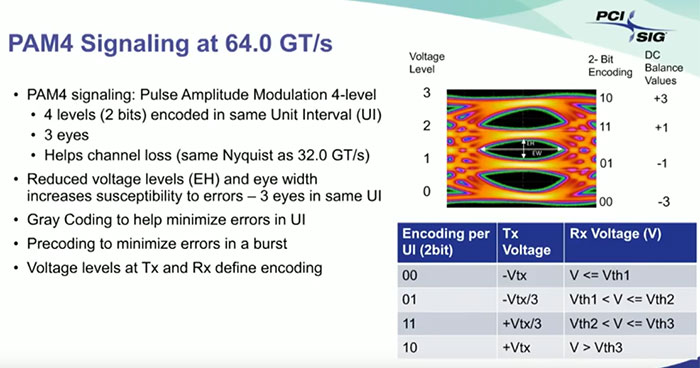 Das Sharma has also blogged about another highlighted feature of PCIe 6.0, error detection and correction with FEC. FEC is an abbreviation of Forward Error Correction and it works in tandem with Cyclic Redundancy Check (CRC) in PCIe 6.0.

With PCIe 6.0 finalised sometime in 2021 one shouldn't expect devices on the market utilising the standard until 2023 or onwards.

mark_a_scott
Why couldn't this years card released be built on PCIe5? by the looks of the chart PCIe5 was ready in 2019 so plenty of time for AMD and nVidia to become future ready.

mark_a_scott
Why couldn't this years card released be built on PCIe5? by the looks of the chart PCIe5 was ready in 2019 so plenty of time for AMD and nVidia to become future ready.

This is a specification release rather than a product release. Only at the point of manufacturers receiving a final specification will they typically invest the R&D into designing then releasing a technology which will be years away. Generally speaking manufacturers prefer previous technologies to have matured, and PCIe 4 hasn't reached that stage yet, there's still a surplus of 3.0 in the wild.
With PCIe 5/6 so close, however, it would make sense in my eyes to bypass 5 altogether.

And lets face it, GPU's don't take much advantage on what's on offer with PCIe as benchmarks have shown time & time again the little gains of FPS between PCIe revisions.