Scientists at the Southern University of Science and Technology (SUSTech) in Shenzhen, China, collaborating with the Department of Mechanical Engineering at MIT, have developed a proof of concept flexible wearable device which is powered by an unlikely substance. Gelatine, plus the heat emanating from a human, has been demonstrated to be a feasible power source for such wearables and IoT devices.

In a paper titled "Giant thermopower of ionic gelatin near room temperature," published by Science yesterday, Associate Professor Weishu Liu (MSE, SUSTech) and Professor Gang Chen at the Department of Mechanical Engineering at MIT outline the potential for self-powered electronic thermoelectric devices that utilise gelatine. Yes, this is the gelatine that you might know better for its culinary uses, made into an ionic gel.

As the SUSTech blog explains, the majority of thermoelectric materials "are inorganic semiconductors that require noble metals or processing technology." Impressively, the new research exploring thermoelectric materials near room temperature shows that using gelatine it was possible to generate thermopower "nearly two orders of magnitude higher than that of typical electronic thermoelectric". For a bit of background, it is worth looking up the Seebeck Effect, a thermoelectric phenomenon first discovered by German physicist Thomas Johann Seebeck in 1821. 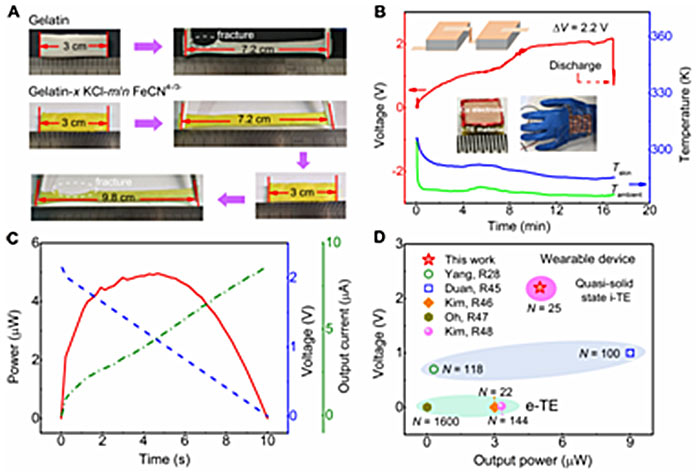 In the proof of concept device, the researchers put together a power cell using twenty five of these gelatine battery elements (5 × 5 × 1.8mm) in a flexible wearable. The cell generated 2.2V, a maximum power output of 5μW, from the warmth of the human host. It is asserted that this is enough to drive the sensors in most IoT devices.

Gentle Viking;1338941
So if this is in my underwear, when i fart i will get a over voltage surge.

Gentle Viking;4201741
So if this is in my underwear, when i fart i will get a over voltage surge.

Gentle Viking;4201741
So if this is in my underwear, when i fart i will get a over voltage surge.

When you know you are going to need more power, eat baked beans and drink Guinness.