Researchers at the Eindhoven University of Technology are extremely optimistic about their latest developments in the field of photonics. In a press release last week the TU/e team claimed to have discovered the 'Holy Grail' in the microelectronics industry - creating light emissive silicon. This important development means that light transmission will be able to replace electron flow in silicon chips, with the benefits of removing of electrical resistance and waste heat generated from within processors.

HEXUS has previously reported upon developments in and the potential offered by photonics in processors and networking equipment. The concept is viewed favourably as current silicon chip designs often reach their performance limits due to heat generated by the microscopic circuitry's electrical resistance. As TU/e puts it, today's processors are limited by the heat they generate "resulting from the resistance that the electrons experience when travelling through the copper lines connecting the many transistors on a chip". Photonics removes that problem as photons don't experience resistance in their transmission. A particularly striking touted benefit of photonics is that it will not just eliminate the waste heat build-up but it will boost on-chip and chip-to-chip communication by a factor of 1000.

Moving onto TU/e's specific advancement and it says it is the first to have made this materials breakthrough that has been 50 years in the making. Along with researchers from the universities of Jena, Linz and Munich, they have combined silicon and germanium in a hexagonal structure that is able to emit light. A key technique to get the silicon and germanium structures to emit light is the use of a hexagonal template and using the purest crystals available. With this structure the Silicon alloy "emits light very efficiently," says one of the Nature paper authors. If things run smoothly, the research team predict that a silicon-based laser in 2020 can be created by the end of 2020. 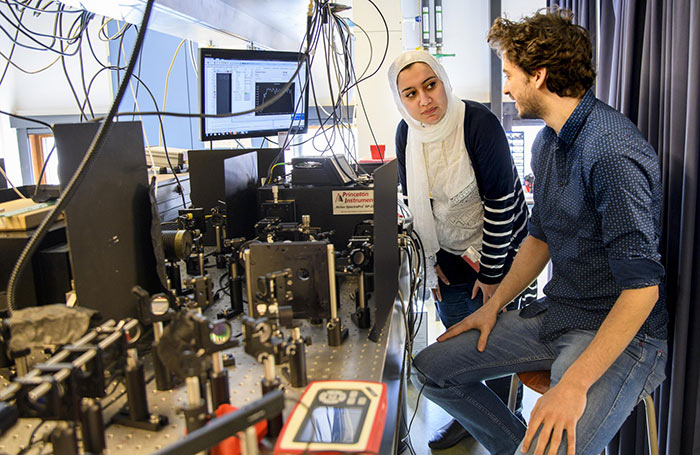 Shared first authors Elham Fadaly (left) and Alain Dijkstra (right) operating an optical setup to measure the light that is emitted. The emission from the hexagonal-SiGe alloy showed to be very efficient and suitable to start producing a silicon compatible laser. Photo: Sicco van Grieken, SURF.

With both the silicon to allow reading and emitting of light developments in place, the scientists will have enabled the creation of the key silicon components required for in-chip photonic communications. The researchers will be continuing work on their developments, refining the technology and making it more practical.