Scientists from the University of Bristol's Quantum Engineering Technology Labs (QET Labs) and Technical University of Denmark (DTU) have successfully developed some breakthrough chip-scale devices which harness quantum physics. HEXUS has previously reported numerous times on the potential and development of quantum computer processors but another attraction of quantum physics is dubbed 'quantum entanglement' and its potential impact on communications and data transfer is quite astonishing.

Rolling back a little in time, Albert Einstein famously described quantum entanglement as "spooky action at a distance". In summary, it is an observed that paired quantum particles will have exactly the same properties of position, momentum, spin, and polarisation - even when separated by a large distance. Photons, neutrinos, electrons, and even large molecules can be affected by quantum entanglement. Bringing us nearer to the present day New Atlas points out that quantum entanglement has been demonstrated working over tiny distances - on a single chip - and up to 1,200km, via satellite. This is the first reliable intra-chip demonstration though.

The QET Labs and DTU researchers have specifically claimed that they have successfully tested a silicon photonic chip that can achieve chip-to-chip quantum teleportation. The chips can encode quantum information in light generated inside the circuits and can process the quantum information with high efficiency and extremely low noise. However, most startlingly they demonstrated quantum teleportation of information between two programmable chips for the first time.

"We were able to demonstrate a high-quality entanglement link across two chips in the lab, where photons on either chip share a single quantum state. Each chip was then fully programmed to perform a range of demonstrations which utilise the entanglement," explained paper co-author Dan Llewellyn of the University of Bristol. "The flagship demonstration was a two-chip teleportation experiment, whereby the individual quantum state of a particle is transmitted across the two chips after a quantum measurement is performed." 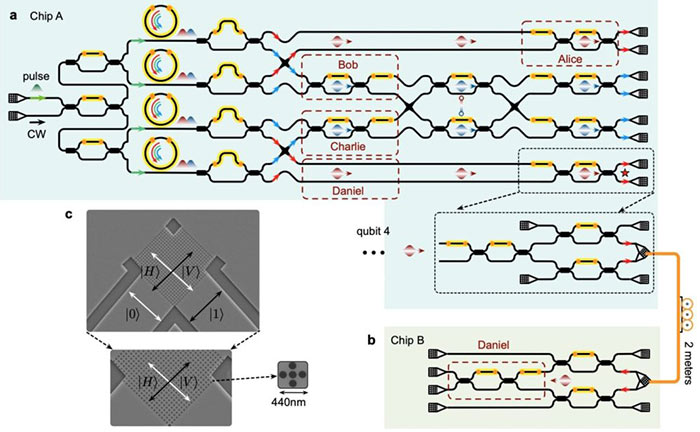 The scientists say that the hardware was capable of other important functionality such as entanglement swapping (required for quantum repeaters and quantum networks) and four-photon GHZ states (required in quantum computing and the quantum internet).

Paper lead author Dr Jianwei Wang, who has now moved to Peking University, summed up that in the future a single silicon chip could integrate quantum photonic devices and classical electronic controls to "open the door for fully chip-based CMOS-compatible quantum communication and information processing networks". Thus this research lays the groundwork for large-scale integrated photonic quantum technologies in devices serving these markets.

Posted by lumireleon - Tue 31 Dec 2019 06:18
To tired to google: so somehow the chips are connected by a type of laser that's why they interrelate? how can the information be teleported yet there is a connection? quantum gimmick?
Posted by Corky34 - Tue 31 Dec 2019 09:45
It's very possible I'm completely wrong as quantum mechanics is confusing as hell but i think the laser may have been used to change the state of the one of the photons in one ‘chip’ and they observed that change in the other ‘chip’, the laser wasn't used to connect (afaict) one chip to another but to generate/change the state of a photon.
Posted by lumireleon - Thu 02 Jan 2020 07:01
by Konstantinos:
There is still a lot of misunderstanding over the “transmission of data at speeds higher than the speed of light, or INSTANTLY” and journalists like to write catchy titles that create even more confusion!

Read carefully, entanglement is known for a century now but there still aspects of it that depend on “quantum mechanics interpretation school”.

“transmission of information at faster-than-light speeds is impossible”