'Hostile' drones were rather newsworthy in the UK late last year with the Gatwick Drone Incident resulting in hundreds of flights being cancelled and travellers being stranded and delayed here and all around the world. At the time I remember seeing the images of police officers pacing around with shotguns, hoping to pop one of the errant drones out of the sky. That's an 18th century solution to a 21st century problem. 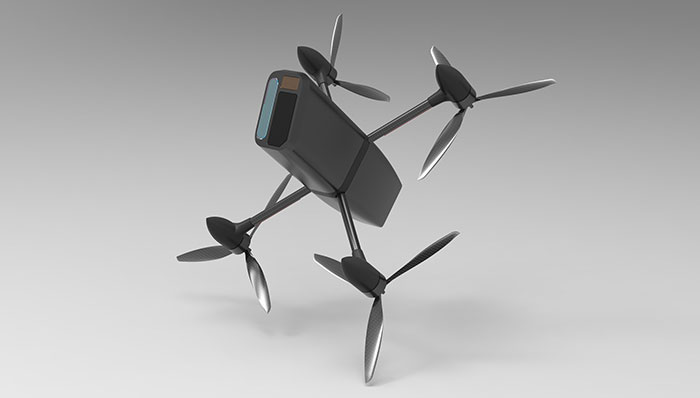 Anduril Industries has just launched a new solution to your unwanted drone problems. You might not have heard about this firm but it is run by Oculus co-founder Palmer Luckey and has already been controversial for its enthusiastic grasping of government and military contracts. The Anduril Counter Drone, is itself a drone (pictured above), which is further described as an interceptor drone and part of the Lattice AI cUAS (counter Unmanned Aerial System) solution from the firm.

The way the Anduril Counter Drone works isn't very space age sounding, it will speed at high velocity towards the 'enemy' drone and simply ram it out of the sky. However, once a human operator gives it permission to do so it can zone in on the target using AI and computer vision to be successful in its drone assassinations. Andruial says its Interceptor can "kill rotary or fixed-wing threats autonomously in any environment, day or night".

The number of credible threats reported by government agencies are growing says Anduril, so this kind of defence is a smart way to address defensive concerns that are otherwise unplugged. According to Bloomberg, Anduril already started shipping dozens of Interceptors to the US and UK earlier this year and it is expanding its contracts to conflict areas - but we aren't informed about these potentially sensitive locations.

Startup Anduril's business seems to be thriving as it recently completed a funding round valuing it at $1bn+.

Posted by philehidiot - Fri 04 Oct 2019 12:54
Why not just attach a circular saw to the thing and use that without wasting your drone? Sure it might lose control briefly but it should have enough altitude to recover. And it's a CIRCULAR saw. Circles are soft. No one could get hurt, so why worry? It'd also be super cool. Or, given you're gonna send prop blades everywhere anyway, why not a drone that shoots shurikens at the target drone? Or bird shot? If there's a drone around all air traffic will be cleared and ground personnel will have to be clear before you can engage given the risk of spinning bits of falling drone.

Or, just do the sensible thing and fry it with radar? You have a giant primary radar dish, jam it into a mains outlet and point. How hard can it be? Aircraft have to be at least 3 miles away from a type 45 destroyer when its radar is at full chooch. I'm sure you could weaponise that. Continuous-wave radar. Job done. Toasty, possibly on fire drone. Everyone happy.

Or, better yet, just get a nerd with a long range wifi antenna, point it at the drone and let them go nuts. They're pretty insecure. Or just jam 2.4GHz in its general direction. What's the worst that could happen? The drone should, in that situation, land immediately / return to home, nice and safely.

This seems like an expensive, wasteful and generally excessive way of doing what could be achieved with the kind of kit airports already have and can therefore operate and maintain - i.e. powerful, directional transmission kit.
Posted by loftie - Fri 04 Oct 2019 13:44
While shooting at drones may be an 18th century solution to a 21st century problem, ramming drones with other drones is using a technique that's far far older.
Posted by PC-LAD - Fri 04 Oct 2019 14:07
why not a net cannon that wraps the thing and keeps hold of it so debris doesn't go everywhere
Posted by philehidiot - Fri 04 Oct 2019 14:29

Or you could just get me to pop up with my gun. Just buy me enough ammunition to keep me happy for the day. I won't hit it, but it'll look like you're doing something, I'll be happy and stop making silly suggestions and the drone will run out of battery eventually.