We are just starting to see 7nm chips make it into shipping components, and devices. These recent process technology strides have been made by Intel's rivals - rather than Chipzilla itself, the originator of Moore's Law - as it struggles with multiple-year 10nm delays. Now, researchers from MIT and the University of Colorado "have fabricated a 3-D transistor that’s less than half the size of today’s smallest commercial models," reports MIT News, via HardOCP.

In their research paper, presented at the IEEE International Electron Devices Meeting last week, researchers revealed the tech behind an advance to enable 2.5nm wide 3D transistors. A technology dubbed 'thermal atomic level etching' (thermal ALE) is the key innovation, and it is said to "enable precision modification of semiconductor materials at the atomic level". 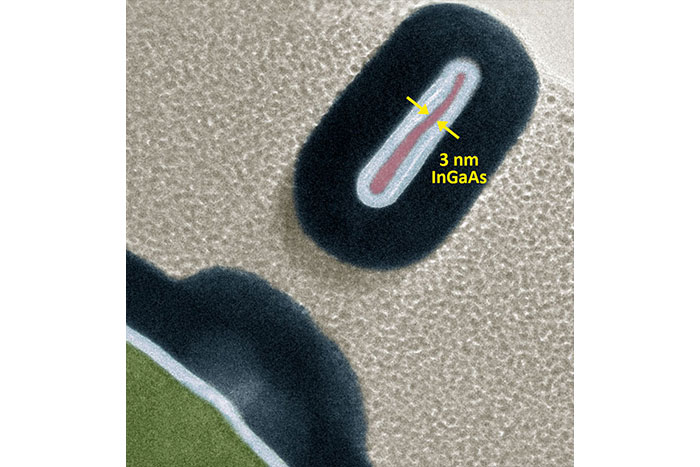 A cross-section of one of the researchers' transistors that measures just 3nm wide.

The new thermal ALE technique is more precise and "yields higher-quality transistors," say the researchers, and importantly it will produce transistors that are more efficient than the current 7nm process is capable of. Another bonus of the new process is that it repurposes a common micro-fabrication tool used for depositing atomic layers on materials, meaning it could be rapidly integrated into existing production lines.

MIT News delves into the difference between the aforementioned thermal ALE and its close relative - atomic layer deposition (ALD). The techniques are said to be close enough that they can be integrated into the same (ALD) reactor and it requires just a "small redesign of the deposition tool," for them to work in concert.

In tests of the researcher's first thermal ALE FinFET transistors (which were about 5nm wide), a device managed to perform about "60 per cent better" than traditional FinFETs in 'transconductance,' according to the report.