The batteries in most of your high tech devices will be based upon Lithium-ion technology. Lithium is a rather rare metallic element mostly mined from a few areas in South America. If this source starts to run low then there could be severe implications to the technology, automotive industries, and others.

Simply moving down the periodic table to the next 'alkali metal' element points towards Sodium being a possible substitute for Lithium, and it does indeed share many chemical properties. If you remember high school chemistry it is even more violently reactive - would this be a positive (more energy stored?) or a negative (more dangerous?). Unfortunately it isn't as simple as weighing up and addressing these variables, due to interactions with other components in a battery. 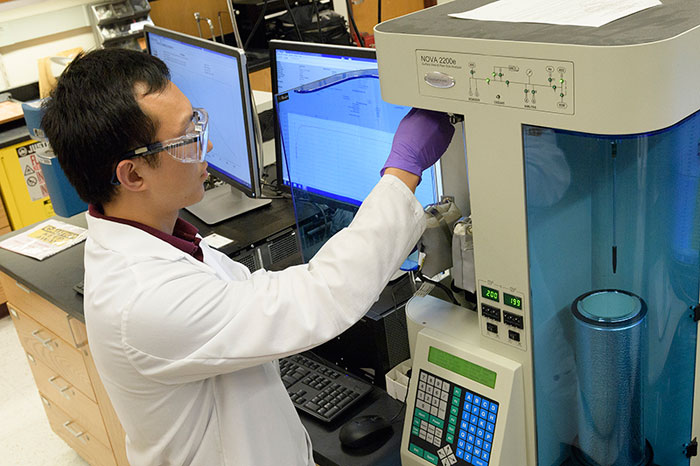 Purdue researcher Jialiang Tang helped resolve charging issues in sodium-ion batteries
that have prevented the technology from advancing to industry testing and use.

Yesterday scientists from Purdue University, Indiana, revealed some breakthrough research that shows how manufacturers can use Sodium in the place of Lithium and that fixes the potentially explosive issue and holds a charge properly.

As the Purdue newsroom report on the discovery states "The problem is that Sodium ions stick to the hard carbon end of a battery, called an anode, during the initial charging cycles and not travel over to the cathode end. The ions build up into a structure called a 'solid electrolyte interface' (SEI)." Unfortunately the interface grows too large with the SEI hobbling the ability to charge the battery properly.

The fix to the above issues sounds remarkably simple. "Purdue researchers proposed using sodium as a powder, which provides the required amount of sodium for the solid electrolyte interface to protect carbon, but doesn’t build up in a way that it consumes sodium ions," explained the newsroom post. To prevent combustion problems the sodium powder is created in an Argon filled environment. The Sodium is 'melted' using ultrasound before being cooled into a powder and suspended in a hexane solution.

According to the team, adding just a few drops of the Sodium suspension onto the anode or cathode electrodes during their fabrication allows a Sodium-ion battery cell to charge and discharge with more stability and at higher capacity to provide a properly working battery.

Posted by ilh - Thu 20 Sep 2018 18:57
Huzzah, yet another promising battery breakthrough we won't see for another 15 years, if ever.
Posted by chj - Thu 20 Sep 2018 21:47
Another one for the list.
Posted by Tabbykatze - Fri 21 Sep 2018 07:44
Another one to disappear into the ether with suspicious circumstances like paper batteries and similar
Posted by tygrus - Sun 23 Sep 2018 07:26
Seems very experimental with no idea of retail product.
Rhetorical questions:
Wh/kg? Wh/cm^3? Charge efficiency? Useful charges for # life? Capacity after 1000 charges? Retail or manufacture cost $/Wh? Operating and storage temperature range? What happens if battery is broken or spiked with metal? How much trouble to recycle?

tygrus
Seems very experimental with no idea of retail product.
Rhetorical questions:
Wh/kg? Wh/cm^3? Charge efficiency? Useful charges for # life? Capacity after 1000 charges? Retail or manufacture cost $/Wh? Operating and storage temperature range? What happens if battery is broken or spiked with metal? How much trouble to recycle?

The inventors don't say and nobody knows? Till then, I don't care.

The energy density is determined largely by the chemistry, and a quick search using the search engine of your choice will show that it is similar to lithium-iron phosphate.

The advantages include the plentiful supply of sodium and the fact that it can be discharged to less that 30% capacity without damage.

The disadvantages are problems over the number of charge cycle, caused by problems with the chemistry at the ion exchange at the cathode - a problem that this research claims to have overcome.

While I can’t answer your rhtorical questions accurately, while sodium as an alkali metal is reactive, it is less reactive than lithium, and So the dangers of a sodium cell being punctured would be no worse than that of a lithium cell.

So this may be a significant breakthrough on the path to a new generation of secondary cell, which may use already established manufacturing techniques for cells using alkali metals.