If you've still got an appetite for plunging into the world of VR, after finding out the price for the HTC Vive consumer edition yesterday, there's an interesting new benchmarking tool from Valve available to check your rig's VR-readiness. The aptly named SteamVR Performance Test is available free to download right now, from the Steam Store, and weighs in at 1.9GB. You don't need a VR headset attached to your PC to run the performance test. Valve's test is based upon a 2-minute section of its Aperture Science Robot Repair demo for the Vive. During the running of the test software your system frame rate performance is monitored and it is determined which, if any, of your hardware components isn't up to par for VR performance. You will be told if your system performance is bound by Graphics Card, CPU, or both, and given a score. The top score you can achieve in the SteamVR Performance Test is 11. Valve's benchmark contrasts with the software of a similar purpose from Oculus which simply inspects your PC hardware specs, running no actual tests, comparing it against a recommended list of recommended components. VR World was contacted by AMD about early SteamVR Performance Test results with AMD claiming that the best performing option was 2x Radeon R9 Nano graphics cards in CrossFire configuration. The table, reproduced above, was verified in part by tests run by VR World itself. I am currently in Taiwan with my i7 laptop with switchable (AMD) graphics and wasn't surprised to find that my system is 'Not Ready' for VR, particularly as it seemed to ignore the AMD GPU and run on the Intel HD graphics chip. Perhaps I can tinker with it later as other users (scroll down to comments) seem to be having trouble with both AMD and Nvidia switchable graphics laptops. 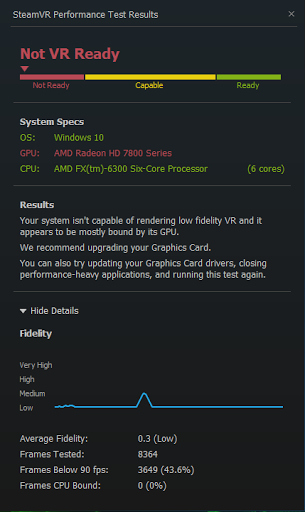 (BCLK is 200MHz so CPU will have run between 3.6GHz and 4.0GHz depending upon how many cores were in use)

There's no decent scale but I overlaid the lines for the hell of it: (again BCLK of 200MHz but the CPU ranges from 3.2GHz up to 3.8GHz in this PC despite it being the same CPU - BIOS / motherboard issue)

Odd that the 290X scores higher but rendered less frames during the test.

Overlay of the 290X results: