Very early this morning, the HEXUS editor published his AMD Radeon RX 6600XT analysis, looking at the hardware, its potential performance, comparative value proposition, and more. Since it is Friday, I thought it would be good to quickly find some Radeon RX 6600 XT partner cards, and write about these offerings, before the weekend arrives. So far, only Asus and MSI have published proper news releases, so I will concentrate on what kinds of products they will be bringing to market based on AMD's latest RDNA 2 GPU. Please note that neither Asus nor MSI have shared GPU clock speeds today.

The Asus ROG Strix Radeon RX 6600 XT cooling design uses a heatsink threaded by four heatpipes, attached to a large baseplate covering the GPU and the GDDR6 RAM modules. Atop of this passive mass are a pair of fans utilizing Asus' latest Axial-tech design and featuring notched barrier rings that optimize the path of airflow. 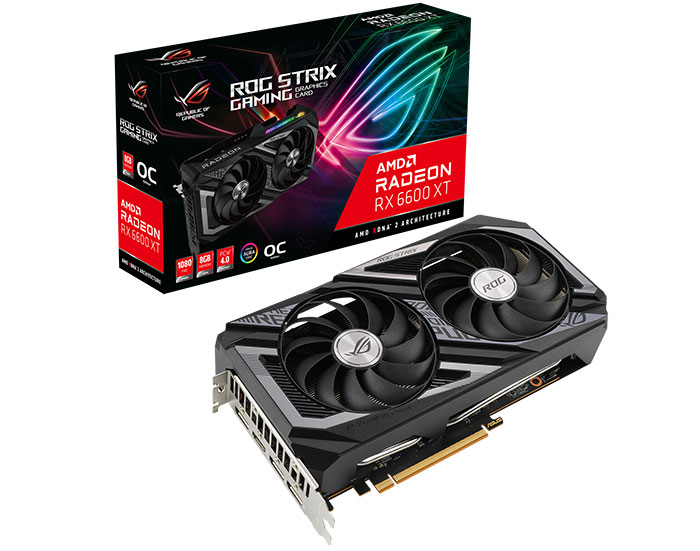 A dual BIOS is present on the ROG card, offering quick switching of fan and power profiles between performance mode, and quiet mode. Both profiles offer 0dB modes for non-demanding graphical workloads. Last but not least, the ROG card has the bold styling you expect from this gaming brand, with a full-length alloy backplate plus Aura RGB LEDs along the left edge of the card.

The Asus Dual Radeon RX 6600 XT tones down some of the ROG extravagances/excesses, but offers a similar dual fan build with 0dB mode. With the Dual model, you still get a full-length alloy backplate, but no LEDs on this black and silver accented design. Asus promises reliability for this, and all its cards, thanks to the Auto-Extreme assembly technology.

At the time of writing, the Asus ROG blog pictures weren't appearing, and these cards aren't to be found in product listings, so I don't have more specifics.

MSI has prepared four new Radeon RX 6600 XT graphics cards, joining its Gaming and Mech families. Thankfully, MSI has embedded photos of its new products in its new release, as well as provided extensive (but not exhaustive) specs in a convenient table. 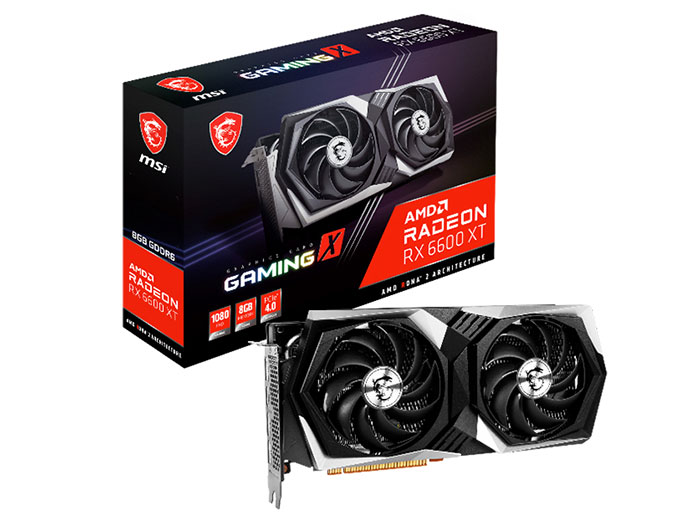 As you can see from the images, both the MSI Gaming and Mech series use twin fan designs, but it must be noted that the Mech cards are 42mm shorter at 235mm in length. The former uses MSI's Twin Frozr 8 thermal design with dual Torx 4.0 fans, combined with a heatsink offering "advanced aero- and thermodynamic technologies," laced through with precision machined heatpipes. A matte finish backplate, thermal pads, and Mystic Light RGB (one side) lighting completes the design. 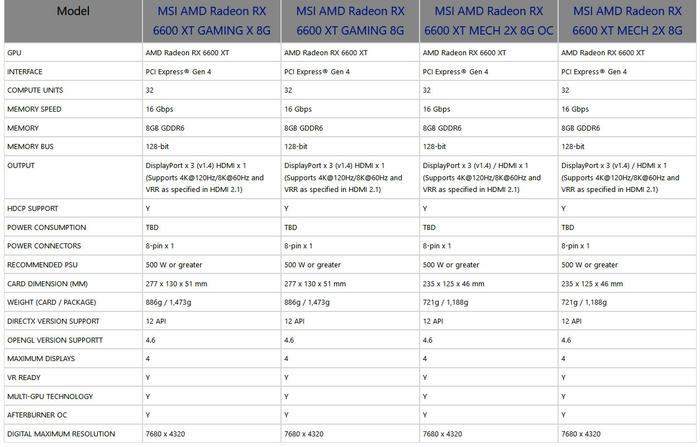 At the time of writing I haven't received emails from the likes of Gigabyte, ASRock, Sapphire or PowerColor. I've checked their PR and product pages, and they don't feature Radeon RX 6600 XT graphics cards either. PowerColor did have a Twitter tease that we should expect new Red Devil and HellHound cards soon, though.

I'm sure the above AMD AIB partners will be readying their designs, but haven't got around to creating publicity or documentation as yet. If anything extraordinary turns up I will feature it in the news. These graphics cards are expected to become available starting 11th August.