AMD launched its high-performance RDNA 2 Mobile Radeon GPUs at the beginning of the month. There were three new mobile GPUs announced by the red team; the Radeon RX 6800M, RX 6700M, and RX 6600M. These are said to be aimed at 'epic' 4K, 1440p, and 1080p gaming, respectively. However, in the launch week it seemed to be the case that AMD and partners were busy distributing only the top end models, to begin with. Indeed, HEXUS has an Asus ROG Strix G15 laptop with Ryzen 9 5900HX CPU, paired with the Radeon RX 6800M GPU, under scrutiny in the labs as I write.

With machines featuring the Radeon RX 6600M GPU held back for now, it is thus interesting to see the first review of such a machine emerge. The Chinese tech site that published it, Zhihu, has compared three very similar laptops which vary solely/mainly by the GPU, as you can see in the configuration tables below. 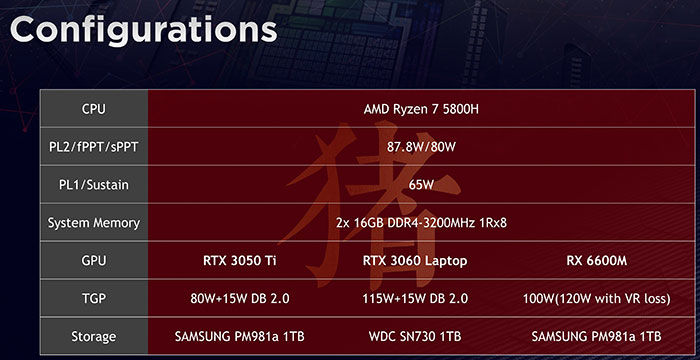 So, how does the most accessibly priced Radeon 6000M part do against the Nvidia competition? According to this early review, the RX 6600M holds its ground pretty well. It benchmarks, creates, and games much closer to the RTX 3060 Laptop level than the RTX 3050 Ti Laptop. While regular gaming is very close – AMD's budget champ is about 10 per cent slower than the RTX 3060 on average – in ray tracing games it gets rather trounced, being 37 per cent slower. Content creation in GU accelerated tasks is good, depending on the programs you will be using most. In crypto mining the RX 6600M very much drags its heels though, and is easily beaten by both the GeForce RTX 3060 and the previous gen Radeon RX 5600M. 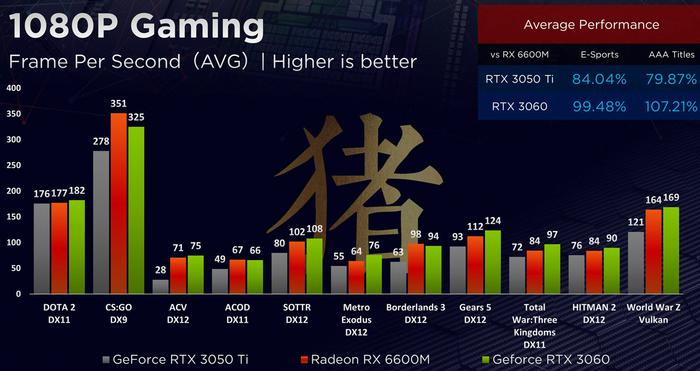 Summing up, these are early figures from a lesser known tech site, but we hope they provide a good indicator of the kinds of performance budget gaming and creator laptops will be able to deliver to consumers in the west this summer/autumn. These machines will be less attractive to crypto-miners, but in modern AAA games at 1080p (not sure of quality settings) will never reduce you to suffering sub-60fps performance.