Earlier this week HEXUS reported upon the EEC regulatory filing from ASRock, which sketched out the AMD AIB partner's intentions to launch approximately six graphics cards as Radeon RX 6600 and RX 6600 XT products. Now some supplemental technical information has emerged with regard to these GPUs via Twitter's HXL and China's ChipHell forum.

A Chiphell forum user updated his drivers and used the latest GPU-Z 2.39.0 release to check a refreshed PC system which was installed with a Radeon RX 6600 and RX 6600 XT in turn. The user claimed that the two graphics cards were ES versions (Engineering Samples) from Sapphire. However, in the forum post, they complained that GPU clocks weren't reported and this was probably due to the system's integrated Radeon graphics confusing things. 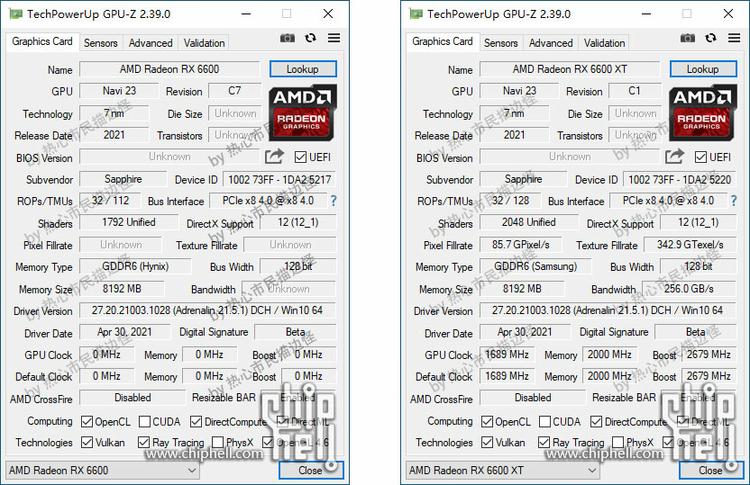 Above you can see the respective GPU-Z screenshots with some key details of the AMD Radeon RX 6600 (left) and RX 6600 XT (right) on show. Twitter user HXL provided a basic bullet point summary comparison of the new AMD Navi 23 GPU packing graphics cards, including data from above and some benchmark and performance data.

The gulf between the Radeon RX 6600 and RX 6600 XT is quite narrow, with the former sporting approx 14 per cent fewer SPs. Memory quotas are the same 8GB of GDDR6 on a 128-bit bus. ETH mining performance is very close at 27 and 30MH/s, respectively. The 3DMark Timespy benchmark is about 21 per cent ahead on the beefier graphics card though, providing a hint that there is not just an SP count advantage but faster GPU clock speeds in play too.

One last word from the Chiphell leaker is that "the 6600XT and the 6600M on the notebook are only different in frequency, and the rest of the parameters are basically the same". This is quite a different approach to Nvidia with its Ampere laptop GPUs. Hopefully we can see these new AMD GPUs release soon both for desktops and laptops.

On a logical front another product may help to supply issues, as a smaller die with be more gpus per wafer which could mean more numbers (if the rest of production can get components).
Posted by kompukare - Fri 14 May 2021 10:36