There are some early rumours swirling around with regard to AMD RDNA 3 flagship GPU performance. Various PC hardware tipsters on social media have been talking about AMD delivering a massive leg-up in the performance stakes as it moves to releasing RDNA 3 GPUs in 2022. Before we go further it is worth reminding readers to add a pinch of salt to this story. 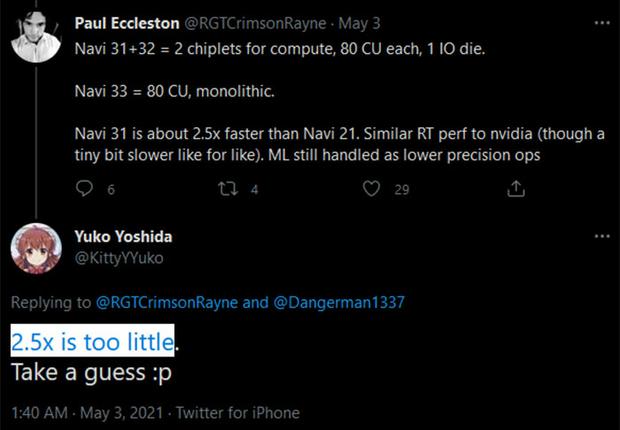 Earlier this week RedGamingTech YouTuber Paul Eccleston, and Twitter tech enthusiast KittyYYuko enjoyed a Tweet exchange as per the screenshot above. You can see Eccleston outlines various Navi 31 GPU designs with the top end models being GPUs with twin 80 CU chiplets with an I/O die – following AMD's aggressive roadmap for chiplet and 3D integration. The face of RGT went on to state that "Navi 31 is about 2.5x faster than Navi 21. Similar RT perf to Nvidia (though a tiny bit slower like for like). ML still handled as lower precision ops".

Japanese Twitter tech enthusiast KittyYYuko commented that 2.5x wasn't a correct projection, and in fact shooting too low. Later, the RGT editor admitted that the Navi 31 data he had seen showed 2.5x raster performance (compared to the Radeon RX 6900 XT) but his info was based upon "older samples".

So, how does the above gel with official info and teasers from AMD? The latest roadmap for Radeon gaming GPUs we have from AMD spans 2019 to 2022 and includes AMD RDNA 3 architecture GPUs codenamed Navi 3x emerging sometime before the end of 2022. They are described as being fabricated on an 'Advanced Node', which may well be 5nm, like TSMC N5. 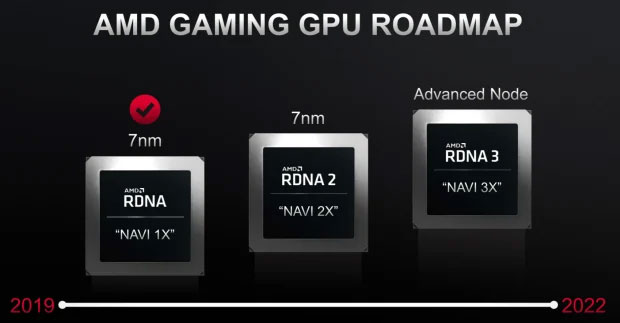 In the last story on HEXUS about the expected performance uplifts delivered by Zen 4 and RDNA 3, we quoted AMD's EVP of the Computing and Graphics Business Group, Rick Bergman, confirming that AMD was targeting a 50 per cent plus GPU performance per watt improvement from the previous generation. Add this to the doubling of CUs in the new flagship RNDA 3 GPU design, and we are staring down the barrel of a 3x performance increase – flagship vs flagship. From the rumour mill report above, it looks like 2.5x expectations are indeed too pessimistic and KittyYYuko might be hinting at something nearer to 3x. 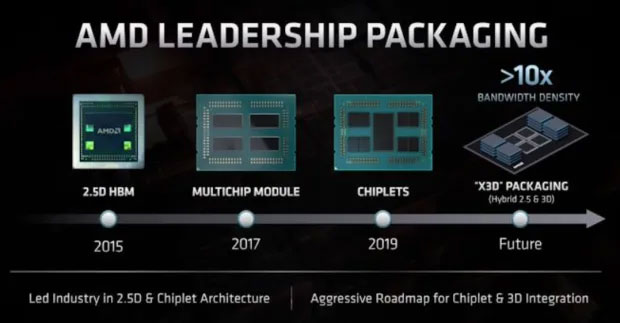 https://www.youtube.com/watch?v=e_m2i5hU9jM
Posted by huggi - Thu 06 May 2021 13:31
Imagine if they went all out and put HBM on the same substrate as the chiplets and IO die…
Posted by Iota - Thu 06 May 2021 17:11
As they pull a Zen 3 and start charging 2-3 times the current prices of GPUs (because it's a lead product!).
Posted by QuorTek - Thu 06 May 2021 17:15
AMD did rocket leap back into the CPU industry, they can do and am doing the same with the GPU Industry, in the long run it is good for us, well maybe, these advanced processes though for no matter what brand creates massive bottlenecks alone being able to get good yields.

What I am looking for, is when they invent something with a good yield on and maybe actually get the technology to create these things more on pair with what we want to make, so a huge pile of topend cards for all, from whichever team out there.
Posted by Yoyoyo69 - Thu 06 May 2021 17:35
I can easily see this being plausible, using chiplets.

AMD however, have joined Nvidia in the pricing of GPUs. I expect these cards to continue the upward trend in cost, before taking into account crypto issues.