Sapphire's newly launched Sapphire Radeon RX 6900 XT Toxic Extreme graphics card has been spotted at various retailers on the continent and the pricing is, as you might expect, Extreme. The high-end AiO packing card launched with an MSRP of €1029, or $999 in the US. However, the first listings in Europe start at more than twice that sum. VideoCardz spotted four European retailers, from various countries in the continent listing at; €2264, €2599, €2999, and even €4159.

HEXUS had the original Sapphire Radeon RX 6900 XT Toxic in the labs back in mid-February, and you can read the full review starting at the link above. Our conclusion was that this AiO cooled graphics card delivered "the ultimate in Radeon performance," whilst remaining incredibly cool, and offered excellent OC and dual-BIOS tech. The only niggle with this model was that we thought the pump and fans could be quieter. 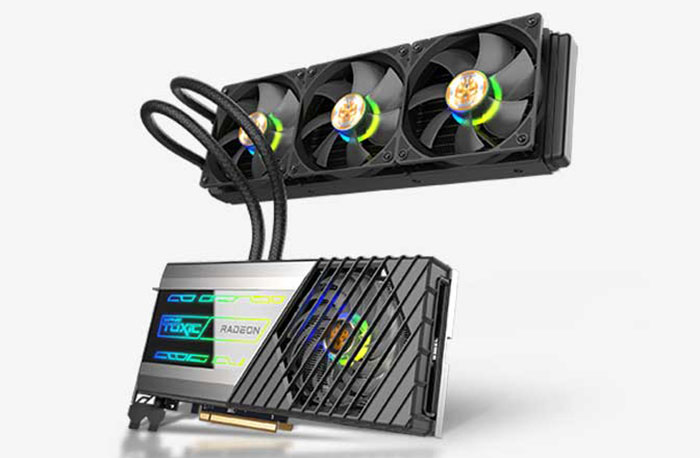 Now the Extreme Edition has arrived, I've put together a key tech spec comparison chart below, so you can see the out-of-the-box benefits of the pre-binned Navi 21 XTXH GPU. For a broader comparison I've added in the triple fan cooled Nitro+ to the table.

The key parts of the specs table to look at are the Toxic boost clock, as well as the other preset BIOS Boost and Game clocks. Remember, the Navi 21 XTXH is a pre-binned Navi 21 XTX. The new products based on these GPUs have had their clock limits raised from 3 to 4GHz, and ensured to have sufficient power delivery in place. The new TOXIC  Radeon RX 6900 XT Extreme Edition will eat through "<430W" depending on the load, says Sapphire, so a minimum 850W PC system PSU is recommended.

Rubarb
When will the madness end? (

When people stop paying stupid money for GPUs
Posted by LSG501 - Mon 26 Apr 2021 13:56
Ironically for ‘top end’ cards that isn't actually all that expensive at the moment…. would I pay that much, not in a million years.