An AMD patent addressing active bridge chiplet design has been spotted by redditor marakeshmode. This new patent, published on 1st April, follows up similar works and a patent for a passive bridge between GPU chiplets filed in January. This body of work is evidence of AMD working to apply its multi-chip-module CPU chiplet strategy to GPUs. One important aspect of the new design to note is that the GPU chiplets with the active bridge would appear to developers as a single, monolithic GPU, so there would be no CrossFire style multi-GPU shenanigans required by game and app makers. 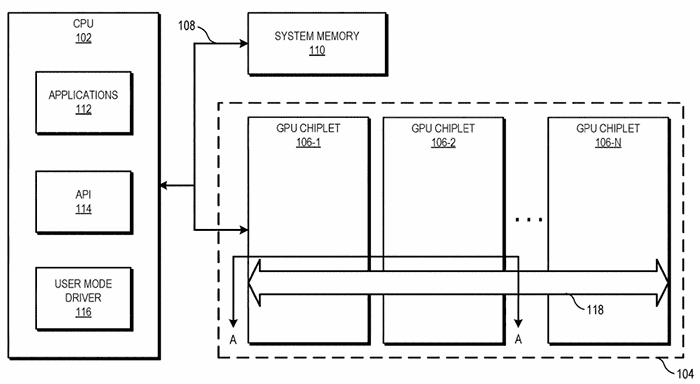 Above is the official abstract for the new patent which is like an executive summary that encapsulates the idea being patented. Part of the driving force behind AMD's patents in this area is that "conventional monolithic die designs are becoming increasingly expensive to manufacture". The scientists admit that CPUs are naturally more suited to multi-chiplet designs, while the parallel compute workloads of GPUs tend to be more efficient when this quality is maximised. Additionally, applications tend to be written with the assumption that a system has just multiple CPU cores but one GPU.

AMD's answer, indicated by this patent, is that chiplet GPUs will share an L3 cache and an embedded bridge to facilitate fast communication between the chiplets. The system CPU will be coupled with the first of the GPU chiplets but the L3 cache will remain coherent between all GPU chiplets present and maintain the 'massively parallel environment' of a large monolithic GPU. Chiplet GPU L3 cache is actually present on the bridge in this design and seems to be similar to the Infinity Cache on RDNA 2 architecture GPUs. 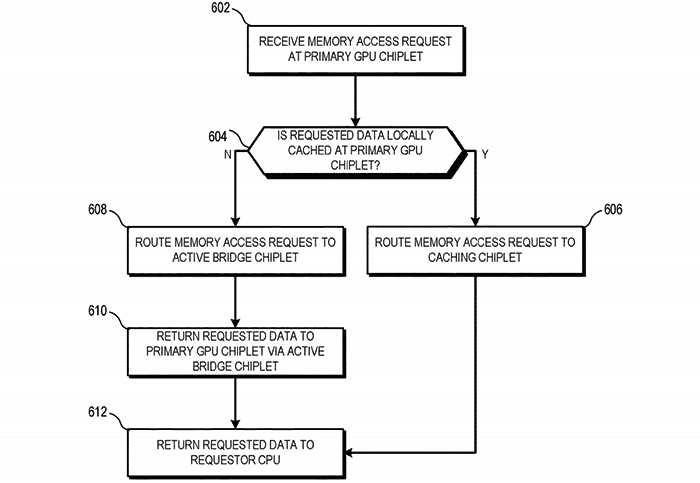 The above raises lots of questions about whether the chiplet GPU will have some drawbacks in practice. It may be that AMD will initially use its GPU chiplet patents in designs for accelerators for servers and data centres. That seems to be the MO of rivals working on MCM GPUs like Intel (Xe-HPC) and Nvidia (with the rumoured MCM architecture dubbed Hopper).

Spreadie
Any bets on Nvidia laughingly calling out AMD for gluing it's GPUs together, before quietly following suit a few years later?

Well, given that they're working on the same idea, haven't cancelled the research after deciding it won't work, then hidden the few samples that they did produce, like Intel; doubt it.

Besides, Ryzen was such a step forwards in both enhancing performance and mitigating issues with Moore's law, a big hurdle for gigantic monolithic GPUs, it'd be silly to ignore chiplet designs.

Ozaron
Well, given that they're working on the same idea, haven't cancelled the research after deciding it won't work, then hidden the few samples that they did produce, like Intel; doubt it.

Besides, Ryzen was such a step forwards in both enhancing performance and mitigating issues with Moore's law, a big hurdle for gigantic monolithic GPUs, it'd be silly to ignore chiplet designs.

Personally, all I need to do is remember how good old Xfire and SLI performance was in its short heyday to get excited.

Responding to only the part in bold.
In the handful of titles they actually worked in. For nothing more than e-peen bragging power as through the FPS was high, it turned out that they weren't rendering the frames equally apart. Of course, all of that is after endlessly faffing trying to get it to work.

However this does look like an exciting angle. Memory in the bridge. Clever use of silicon. More excitingly, should this be released, it will likely become the regular option rather than xfire/SLI and so not suffer from the problems with being a niche technology. Such as endless faffing to get it to work.
Posted by badass - Tue 06 Apr 2021 15:07

DanceswithUnix
Another step perhaps towards having a CPU and GPU chiplet combined in a desktop socket.

Hmmm with shared L3 and quite a lot of it! I can see certain applications getting a huge speed up with that. Effectively direct GPU-CPU comms.