The AMD Radeon RX 6700 XT is scheduled to become available, in reference and custom AIB designs, in just a week's time. Meanwhile, important AMD hardware partners like Asus appear to be already getting their ducks in a row for Radeon RX 6700 (non-XT) product rollout.

VideoCardz has spotted that a host of new Asus graphics cards has been registered with the Eurasian Economic Commission website and among the new models we expect, such as Asus Strix, TUF, and Dual RX 6700 XT 12GB models, there are a pair of non XT models – which also boast 12GB of VRAM by the looks of their codenames. 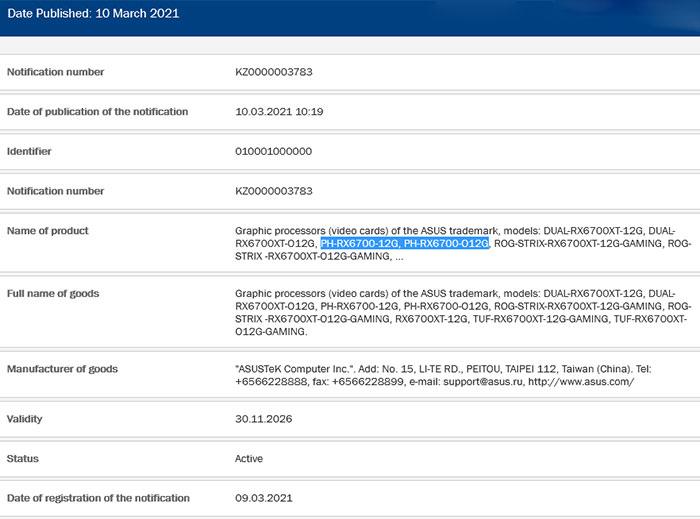 The two entries in question belong to the entry level Phoenix series which typically come in smaller form factors and feature compact coolers and limited OC capabilities. In the image above you can clearly see the PH-RX6700-12G and PH-RX6700-O12G listed. In Asus code that refers to; Phoenix family graphics cards, Radeon RX 6700 models, with 12GB of VRAM. Moreover, one of these cards will come with a factory overclock.

Source site VideoCardz comments that EEC documents from last month show that ASRock and PowerColor are readying RX 6700 products with 6GB VRAM, so it is hard to understand what is going on. One possible answer is that the RX 6700 has been reconfigured to better compete against the GeForce RTX 3060 12GB. Adding fuel to the 12GB re-jig rumours is the listing of an RX 6600 XT with 12GB of VRAM. Could this mean that the entire mid-range set of RDNA 2 graphics cards will come with 12GB or that the RX 6600 XT will be re-jigged to 6GB for example? For now it is a bit of a head scratcher as we await official information or more authoritative leaks.