UL Benchmarks has added a new feature test to its 3DMark benchmarking suite. You might have seen a still from this new test in my report yesterday, on Intel Graphics chief Raja Koduri testing an Xe-HPG GPU with this software. Now UL has provided a description of the test, and before you download and run it you can see a video of the test running, as shared by HardwareLuxx a few hours ago.

As I wrote yesterday, Mesh Shaders are one of the main new features and capabilities in DirectX 12 Ultimate for PCs and latest gen Xbox consoles. Ray tracing seems to get the most column inches but other DX12 Ultimate features like VRS, Sampler Feedback and Mesh Shader all have a big part to play in improving gaming graphics on cutting edge systems.

Mesh Shading's great appeal is that it can significantly lighten the load on processing by applying a new model to culling geometry that isn't seen from the user viewpoint. As the name suggests, it uses small meshlets and parallel processing and offers programmers great flexibility and control.

The test scene which you see animated in the video (top) shows a fantasy hall with rows upon rows of ornate pillars, as the camera moves there is plenty of scope for culling unseen objects to save processing. As the test runs it takes a first pass using a traditional approach to geometry culling, followed by a second pass using the meshlets. UL Benchmarks says the result of the test is "the average frame rate for each pass and the difference between the two expressed as a percentage". 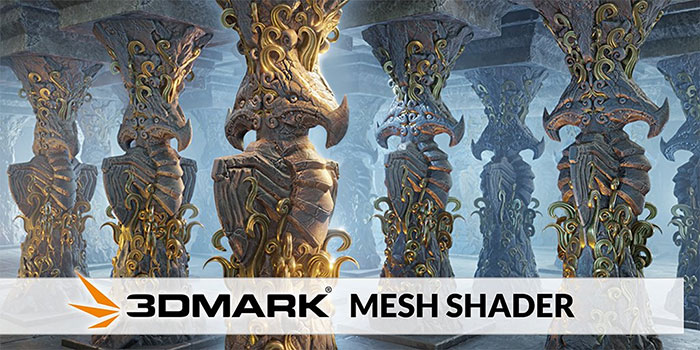 Mesh Shaders, a new feature in DirectX 12 Ultimate, give developers more flexibility and control over the geometry pipeline. The 3DMark Mesh Shader feature test shows how game engines can improve performance by using the mesh shader pipeline to efficiently cull geometry that is not visible to the camera. An interactive mode lets you experiment with different settings and visualization tools.

As well as letting the test run through and reading a score, users can chose to play around in the test's interactive mode. This lets users highlight meshlets and see the LOD for each of them in a scene.

If you want to run this new feature test you will need a modern GPU with support for DX12 Ultimate and Windows 10 2004 or newer. The Mesh Shader Feature Test is a free addition for owners of the 3DMark Advanced Edition (and Pro customers).