Few would argue AMD has hit home runs with successive Ryzen and EPYC CPUs. On the graphics side, however, Radeon's had a tougher time against Nvidia GeForce and Quadro. Looking to change that on the PC gaming front is the high-performance RX 6000 Series colloquially spoken about as Big Navi.

You already know this series comprises the RX 6800 XT and RX 6800 arriving on November 18, followed by the chief RX 6900 XT on December 8. Whetting enthusiasts' appetites, we can today provide insight into AMD's new reference cards that will be taken up by most add-in board partners as the staple solution, augmented further by their own overclocked designs.

Like the Radeon line itself, AMD has been playing aesthetic and build catch-up to the impressive Founders Editions from Nvidia. That perceived gap closes to a large degree with the latest iteration.

Taking the Radeon VII as a rough design base, AMD's build quality goes up a notch or two. The card is effectively a meaty metal frame enclosing a full-width heatsink. The two-tone shroud works well and a gunmetal finish reduces incidence of fingerprints that are all too evident on the GeForce 20-series Super cards.

That said, the XT has four small mirrored sections surrounding the central fan. There's no reason for them. The three spinners switch off at low loads, which is nice.

The 'dent' of the reference Radeon RX 5700 XT is not carried over, thankfully, though the central section, above and below the Radeon logo, is shaped inwards. It looks fine and makes the card easier to handle. The logo is backlit in red and contrasts nicely with the frame.

Weighing exactly 1,500g put this firmly in the tank-like category. You would think this a massive card but it measures only 267mm long and 120mm tall. Installed with a 300W TDP, power is sourced by dual 8-pin connectors. AMD opts for a 2.5-slot cooling solution here.

There's no upper interruption in the metal backplate so any AIB wanting, for example, a BIOS switch will need to design their own cooling apparatus. Like the front, the rear is solid and generally reminiscent of the Nvidia 20-series FE cards. It's a shame the holding brace is exposed here; a completely smooth rear would look better in a windowed chassis.

Be careful if you're storing the card. Our sample already has a hairline scratch on the top after being placed underneath the non-XT model. Point is the aluminium scuffs extremely easily.

AMD goes for dual DisplayPort and a single HDMI 2.1 for output duties. It's good to see USB Type-C for those that have missed it from Nvidia's recent releases. Notice how the heatsink stands a bit taller than the I/O section? Also consider that AMD intends to keep all the expelled hot air in the chassis. It escapes through the heatsink fins and cannot be pushed out of the rear. 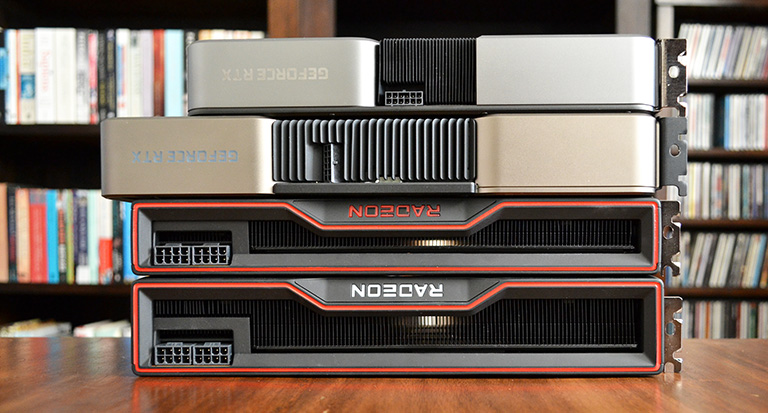 Speaking liberally of the competition, here is how the two new Radeons stack up, physically, to the Nvidia GeForce RTX 3080 FE and RTX 3070 FE.

Does that mean the reference Radeon RX 6800 is exactly the same as the XT? Not quite. Read on the find out why.