AMD recently took part at the Bank of America Securities Global Technology Conference, and was represented by its Chief Financial Officer, Devinder Kumar. During what would usually be a rather dry financial conference presentation, Kumar confirmed some key aspects of AMD's RDNA 2 launch plans and how products based upon these GPUs are 'on track' for release later in H2 2020. Zen 3 CPUs are on track too for release in the same time frame, said Kumar. 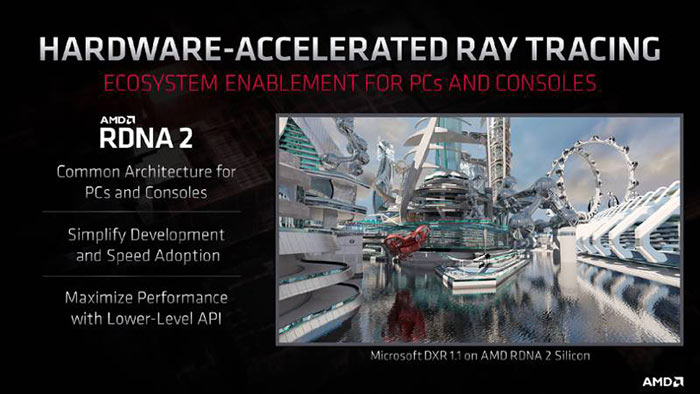 The key takeaway for PC enthusiasts is that AMD has confirmed PC usres will get their hands on RDNA 2 graphics cards ahead of the technology being made available to the masses via the release of the next gen consoles from Microsoft and Sony. Furthermore, the long awaited 'Big Navi' (sometimes previously referred to as Navi 2X or simply Navi 2) will arrive ahead of the holiday season (many think it will launch as soon as September).

'Big Navi' will be a powerful and probably expensive halo product, and used to launch RDNA 2 tech to consumers. "Enthusiasts love to buy the best, and we are certainly working on giving them the best," explained Kumar. It is going to be an important release as the first gen RDNA graphics cards didn't go after Nvidia's top performers, and lacked support for real-time raytracing in hardware.

Another important aspect of the arrival of RDNA 2 is that it will (eventually) permeate the whole of the next gen Radeon range for consumers. "The RDNA 2 architecture goes through the entire stack," Kumar told the BoA interviewer, "it will go from mainstream GPUs all the way up to the enthusiasts and then the architecture also goes into the game console products... as well as our integrated APU products." Focussing upon the one architecture should be beneficial to feature development, refinement, and so on. 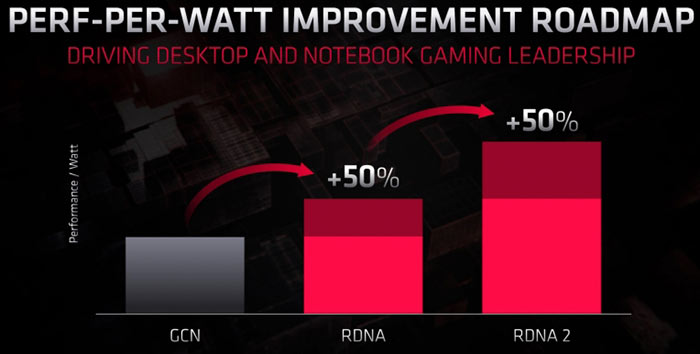 It will be interesting to see AMD's take on hardware raytracing; hardware, software, and performance. As for features, the RDNA 2 GPU based graphics cards will be AMD's first to be certified as Microsoft DX12 Ultimate hardware, which provides a baseline for expectations. We are expecting good things thanks to the recent console tech and gameplay demos but don't have a great deal of clarity over how powerful the 'Big Navi' halo card could be.

“it will go from mainstream GPUs all the way up to the enthusiasts and then the architecture also goes into the game console products… as well as our integrated APU products.”

There's a sneaky ‘will’ in there, but if they do refresh RDNA 1 products it would seem to go against this comment to investors, which might not go down well.
Posted by lumireleon - Thu 04 Jun 2020 12:21
how many more FPS will you get if the 5700XT would have VRS enabled?
Posted by Xlucine - Thu 04 Jun 2020 15:49
Wonder if APUs will skip RDNA1?
Posted by Yoyoyo69 - Fri 05 Jun 2020 15:47
The trouble is, if AMD start to offer competition, Nvidia will start to spin off at a much larger tangent, creating a lot of disparity.

AMD have a good chunk of the market now (with consoles being such a huge portion of gaming), hopefully they can establish a standard which all devs can adopt, to reduce workload and issues.

The best scenario for all is that AMD can trounce Nvidia and bring some serious competition. The we just have to work Intel don't run out of cash before they catch up too, then we're back to three players.
Posted by kalniel - Fri 05 Jun 2020 15:58

Yoyoyo69
The trouble is, if AMD start to offer competition, Nvidia will start to spin off at a much larger tangent, creating a lot of disparity.

Can you explain what you mean? Are you suggesting nVidia would drop out of the say gaming PC market if there was competition at the high end? I don't think they would - they have competition in most market segments, and they haven't always had the high end to themselves.

The best scenario for all is that AMD can trounce Nvidia and bring some serious competition.

Those things seem mutually exclusive. The best scenario is surely close performance as then they'll have to fight on price.