AMD has launched the new Radeon Pro W5500 workstation graphics card aimed at professionals in the fields of design & manufacturing, engineering & construction (AEC), and architecture. This new 7nm RDNA architecture-based solution is said to offer "superior performance in real-world applications and up to 32 per cent lower power consumption than the competition*." 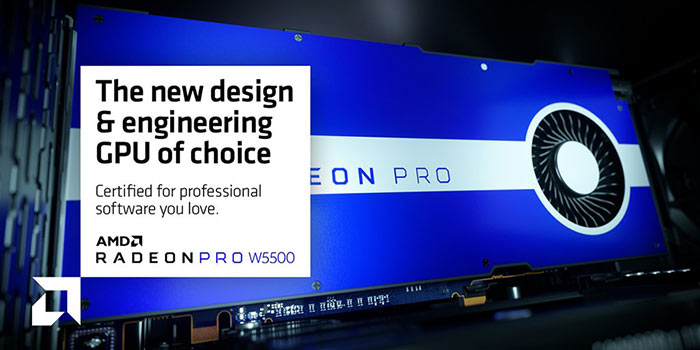 There were actually two version of the Radeon Pro W5500 launched today; the single-slot desktop add-in card which is capable of up to 5.32TFLOPS and a lower powered mobile version with a headline performance level of 4.79TFLOPS. Sporting AMD's RDNA architecture and 22 CUs, GDDR6 memory and PCIe 4.0 support, these are basically Pro versions of the Radeon RX 5500 XT and RX 5500M. 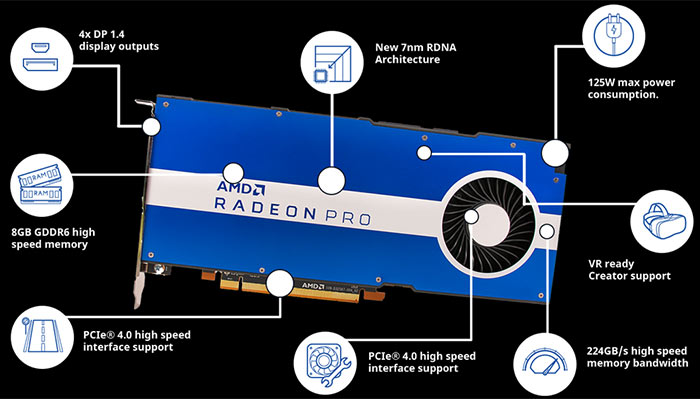 AMD's Scott Herkelman, CVP and GM of the Radeon Technologies Group, talked about the new workstation graphics solution delivering "exceptional power efficiency and leadership performance for 2D and 3D design applications," but in reality this is a modern AMD Radeon Pro solution based upon a Navi GPU, on a budget. Nevertheless, depending upon the hardware it replaces it could indeed enable "immersive, real-time visualizations of design concepts to make quick and better informed decisions". 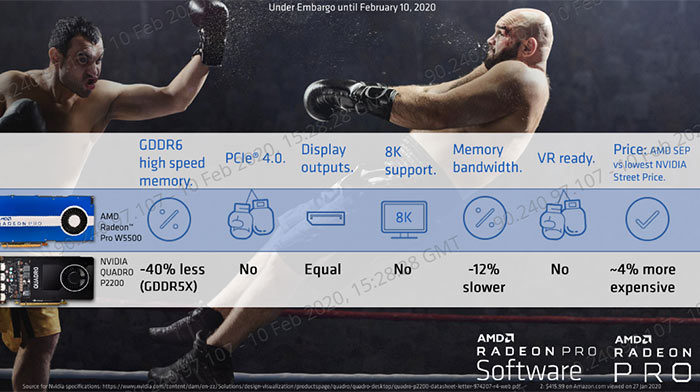 If you are interested in the competition* as mentioned in the intro, AMD is comparing the AMD Radeon Pro W5500 against the he Nvidia Quadro P2200 graphics card. Nvidia's current £400 workstation solution is a 75W Pascal GPU based solution with 1280 CUDA cores, 5GB of GDDR5X and up to 200GB/s bandwidth. 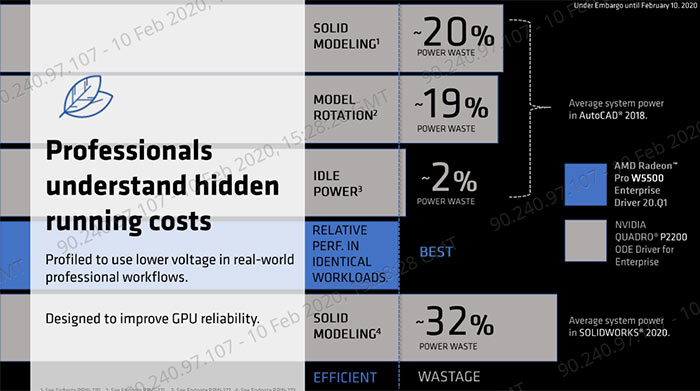 AMD says that the Radeon Pro W5500 graphics card is expected to be available from leading retailers beginning mid-February 2020, for an SEP of US$399. The new workstation card is currently on show at 3DExperience World 2020 in Nashville, until Wednesday. If you are interested in a mobile workstation packing the Radeon Pro W5500M the first such machines will start to appear in spring.