At the recent Hot Chips Symposium, a member of the press wanted to know: what were AMD's plans with multi-GPU – following the RX 5700 series 'signal'. AMD CEO Dr Lisa Su, no less, answered the question as follows: "To be honest, the software is going faster than the hardware, I would say that CrossFire isn't a significant focus".

Unfortunately the statement as quoted is somewhat open to interpretation. TechPowerUp, for example, reckons that it means that CrossFire support in games is "enabled as more of an afterthought than a 'focus', and that's just the way things are". Going forward it reasons that multi-GPU will be brought into hardware via MCM, so the support software side of things is done away with. 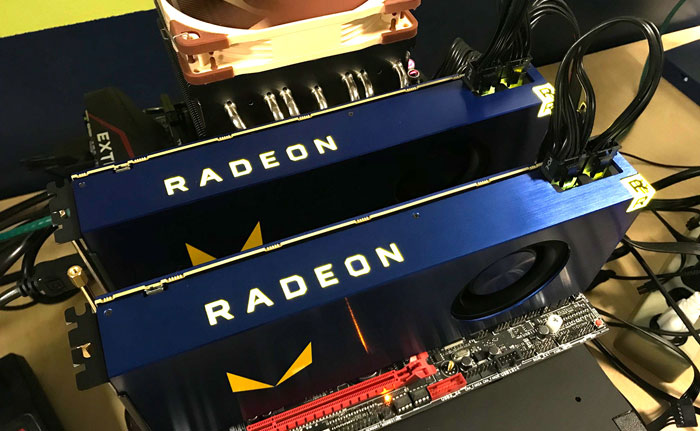 Interestingly Intel might be going in a different direction. It was recently noticed that a new Linux driver signalled the arrival of Intel Xe iGPU + dGPU multi-GPU support. Intel will be marketing Xe as a scalable platform that spans across iGPUs to data centres "so an SLI/CrossFire-esque support from the beginning is not outside the realm of possibility," pondered NoteBookCheck.

Posted by Saracen999 - Fri 23 Aug 2019 14:47
I wonder if this just reflects growing power and competence of single card solutions. Maybe what used to demand Crossfire can now be done solo, and the need for Crossfire is so marginal as to be a low priority?

Then again, I was never in the crossfire market, so what do I know.
Posted by spacein_vader - Fri 23 Aug 2019 14:50
Because nobody uses it. Think the Steam hardware survey had the combined Crossfire and SLI user base at circa 1%.

It doesn't always work, even when it does the benefits are very situational and it must cost loads in driver support and testing for a tiny user base.

Also I've never seen a situation where 2 £200 GPUs offer more performance in games than 1 £400 GPU.
Posted by afiretruck - Fri 23 Aug 2019 15:11
Crossfire and SLI themselves are old technologies, requiring lots of driver support and a fair amount of game developer support to enable them to work, and, more often than not, work surprisingly well.

What I reckon they're getting at is simply not providing the implicit support for DX11 and earlier titles, while still allowing DX12 and Vulkan titles to do whatever they wish with multi-GPU implementations. It's an understandable move, one that could push game developers to look at multi-GPU support properly instead of tacking it on at the end, or push them to not bother at all.

It could be that the crossfire support/development resources are being reallocated to MCM support and development, which would be really awesome. I would be intrigued to see how they handle an MCM-like solution over multiple consumer video cards, if it's supported at all at the driver/hardware level.
Posted by Ttaskmaster - Fri 23 Aug 2019 15:21
The only reason to ever use multiple graphics cards is for those unbelievably awesome-looking SLI bridges that EVGA make!!
Posted by AGTDenton - Fri 23 Aug 2019 16:12

spacein_vader
Because nobody uses it. Think the Steam hardware survey had the combined Crossfire and SLI user base at circa 1%.

It doesn't always work, even when it does the benefits are very situational and it must cost loads in driver support and testing for a tiny user base.

I remember being suckered into their Spider and Dragon platform nonsense which alluded to multiple cards being better, but all I had was grief & anger I didn't just buy a single nVidia card.