Last week Apple added some further configuration options for would-be buyers of its MacBook Pro 15 laptops. High end GPU configuration choices used to plateau with the selection of the AMD Radeon Pro 560X with 4GB of GDDR5 memory and automatic graphics switching (to the Intel UHD Graphics 630 iGPU). Now there are options of configuring one of two AMD Radeon Pro Vega dGPUs in this premium laptop. 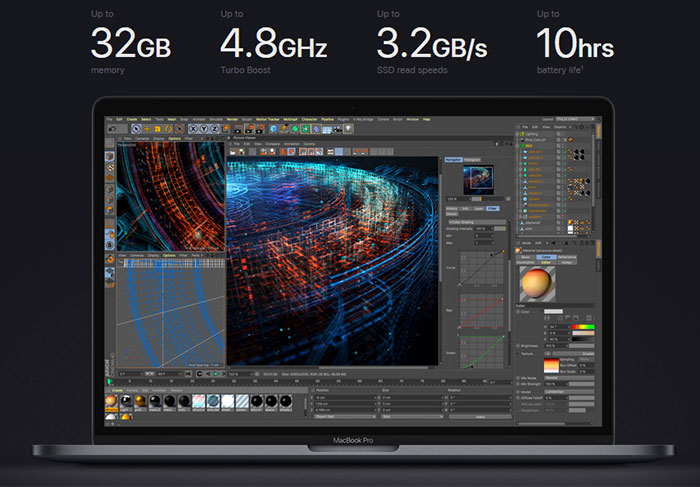 MacRumours reports that one of its readers has already had the opportunity to test and benchmark a MacBook Pro featuring the top-end choice of a Radeon Pro Vega 20 graphics card. The system also came with a 2.6GHz Core i7 Intel processor, 16GB RAM, and a 1TB SSD. The user ran the Geekbench OpenCL test, recording a score of 72799. Since that time MacRumours has nosed around the Geekbench online result browser to find similar machines with Core i9 processors scoring 75817, 76017, and 80002. A separate benchmark of a Core i9 plus Vega 20 model on the Metal tests yielded a score of 73953.

How does the above compare to the previous top configuration using a Radeon Pro 560X dGPU? MacRumours says that similar MacBook Pro 15 models with the older top configuration would score around 65000 in the OpenCL tests and approx 57000 in Metal, "suggesting much higher graphics performance with the new Radeon Pro Vega 20 card".

Corky34
I must have it wrong but the top-end model makes it seem like you get three GPUs, the Pro 560X, Intel 630, and Pro Vega. :confused:

Where?
Posted by edmundhonda - Tue 27 Nov 2018 13:11
An unannounced refresh of the Kaby Lake-G unless I'm missing something. Same setup with Coffee Lake/Whiskey Lake bolted onto the side of a cut down Vega GPU and some integrated HBM.