There is increasing noise about AMD refreshing its Radeon RX Polaris graphics card range. Sources such as Germany’s Golem.de, China’s PCOnline and Chiphell, suggest that AMD will very shortly launch the Radeon RX 670. Then, in November, it will follow up with the launch of the RX 680. The above linked report from PCOnline quotes its sources as being AMD add-in-board partners. 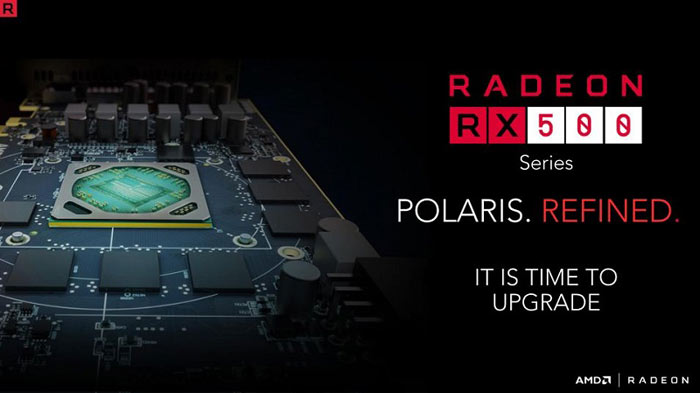 Refined again for the RX 600 Series

Graphics chips on the new cards come from the so-called Polaris 30 family. Looking over the history of Polaris production: Polaris 10 cards (such as the Radeon RX 480) used GlobalFoundries 14LPP process, then Polaris 20 (like the RX 580) moved to 14LPP+. With this new Polaris 30, AMD will be using 12LP as used by Pinnacle Ridge processors.

The refreshed Polaris 30 graphics cards, the Radeon RX 670 and RX 680, will have the same amount of shader units, memory type and memory interfaces to their predecessors, reports Golem. However, thanks to the new 12LP process we should see higher GPU clock frequencies and/or lower power consumption. Elsewhere “changes to the middle-end and back-end-of-line, such as the metal layers, could make the Polaris 30 more compact than the Polaris 20, which would make AMD GPUs less expensive to produce”, says the source.

Turning to possible launch/release timings, PCOnline suggests that the Radeon RX 670 may be launched as early as Friday. Dates quoted are from 12th to 15th October. Those waiting for the fastest Polaris graphics card, the RX 680, will have to wait until sometime in November though, says the same report.

Please take the above chitter-chatter with a pinch of salt. On the positive side of things we won’t have to wait long to see if the RX 670 launch date is correct. If it is, it bodes well for the RX 680 rumours.

Posted by CAT-THE-FIFTH - Mon 08 Oct 2018 12:54
So is this another pre-overclocked RX470 or a more efficient one?? Gamersnexus mentioned months ago AMD ordering fastr GDDR5. I do wonder why they never released 40CU or 44CU Polaris based SKUs - most of the design work has already been done for the consoles.
Posted by Wolfclaw - Mon 08 Oct 2018 13:23
Process shrink and performance boost, will it be a threat to nVidia, doubt it, unless it does a Ryzen and come close enough in performance but a dramatic price difference to 1000/2000 series cards.
Posted by DanceswithUnix - Mon 08 Oct 2018 13:33

Wolfclaw
Process shrink and performance boost, will it be a threat to nVidia, doubt it, unless it does a Ryzen and come close enough in performance but a dramatic price difference to 1000/2000 series cards.

Given these are aimed at the 2060 which isn't out yet, and the 580 is already faster than the 1060 so it doesn't help there, I can't imagine it worries Nvidia one jot when eyes are mostly on the 2080 which AMD have no real response to.

It does give a brief time when Nvidia are pitching their “old” range vs an AMD “new” range at this point. That does matter when it comes to driver support, though probably not enough to be a deal breaker for most.
Posted by Bagpuss - Mon 08 Oct 2018 13:42
If AMD want to get back in the game they need to bring out 7nm cards that can match/beat the upcoming 2060 & 2070 cards at traditional raster graphics for $100 less than the Nvidia cards.

There would be plenty of people out there who would settle for that kind of price/performance metric.

Forget about the ray tracing gumpf, its two generations too early for it viable at resolutions higher than 1080p.
Posted by PC-LAD - Mon 08 Oct 2018 13:43
So would this be a GTX 1065 equivalent GPU if it were to exist