Sapphire has written to HEXUS regarding a new member of its Pulse range. The AMD-exclusive graphics card maker has readied the Sapphire Pulse Radeon RX Vega 56. As many PC enthusiasts will know, the Sapphire Pulse line delivers modern AMD GPUs at a keener price point than high end ranges such as the Nitro+. In order to provide the best value the Pulse series targets core features that matter most to gamers – power and cooling. HEXUS has recently published reviews of both Sapphire Pulse and Nitro+ products. 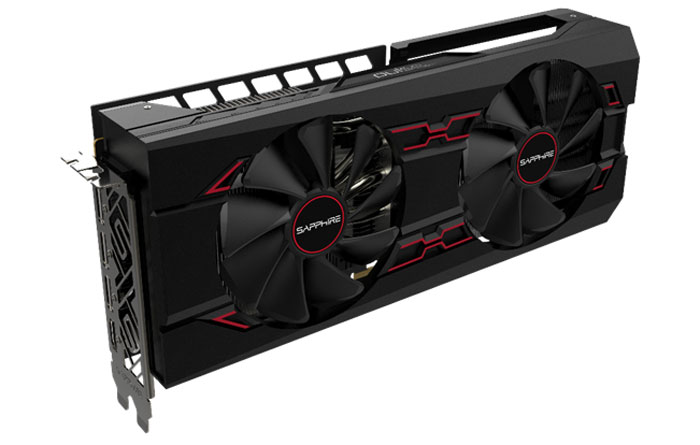 According to Sapphire the key features of the new Pulse Radeon RX Vega 56 are as follows:

AMD’s Radeon RX Vega 56 chip, as featured on this card utilises 3584 Stream Processors running with a factory overclocked 1512 MHz Boost Clock. It is paired with 8GB of second gen HBM clocked at 800 MHz (1600 Mbps Effective). There’s a hardware switch on top of this card with which you can switch down gears to an efficiency preset for lower temperatures, reduced power draw, quieter cooling, thanks to its tuned down clock speed.

The cooling solution provided with the Sapphire Pulse Radeon RX Vega 56 is Sapphire’s Dual-X cooler. It features a large heatsink with a copper base and a set of four 8mm heatpipes. Sapphire has designed the heatsink to extend beyond the length of the PCB for increased heat dissipation. It hasn’t forgotten the VRM section either – this has its own cooling module with separate heatsink connected to a 6mm heatpipe.

Active cooling comes courtesy of two 92mm dual-ball bearing fans, just like in the Nitro+. The Pulse fans run between 0 – 1650RPM nominally but have a max speed of 330RPM.

All the above is delivered at a value price without compromises in quality, asserts Sapphire. For example the Pulse still features the latest generation of Black Diamond Chokes for reduced coil temperatures and better power efficiency, and the external PCI-E power connectors feature a fuse protection.

If you budget allows a little more latitude, Sapphire would like to draw your attention to the Nitro+ Radeon RX Vega 56. It casts shade on the Pulse with its core boost clock of 1,550MHz, Nitro Glow RGB LEDs on the back and side, 12 phase power design, triple fan cooler, and a copper-based main cooling module. Furthermore, it comes bundled with the Nitro Gear Card Support Bracket.

Posted by Biscuit - Wed 24 Jan 2018 12:22
Can Hexus do us a favour and just not bother publishing graphics cards news until the market has sorted itself out?

iworrall
Fixed that for you.

Available from 12th Feb on pre-order. Final price is not set.