As teased at the beginning of the month, AMD has released a major update to its suite of graphics drivers. Eclipsing the AMD Radeon Software Crimson ReLive Edition this year for its BAR (big annual release) we have the AMD Radeon Software Adrenalin Edition with the new AMD Link mobile app (Android and iOS) and the all-new Radeon Overlay gaming overlay. Furthermore, AMD has added updates to the existing suite of graphics card tools such as Radeon ReLive, Radeon Chill, Radeon WattMan, and Enhanced Sync. 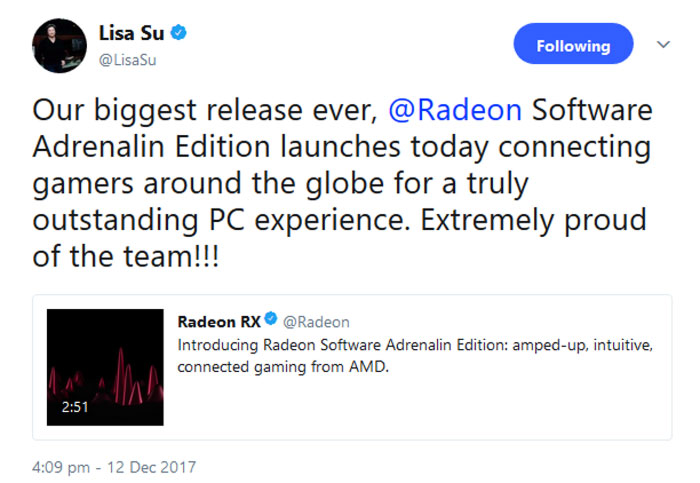 This is an interesting new part of the driver suite. AMD Link can be installed on your Android or iOS tablet and function as a second screen into your gaming world. The app features a dashboard streaming and replay with Radeon ReLive, GPU and PC performance monitoring, an AMD news feed, and notifications for new driver releases.

Radeon overlay is a convenient way to access all the advanced Radeon driver features from within your game. The pop-up UI allows you to fine-tune your game experience, and monitor, record and share your gameplay without ever leaving the game. From the overlay you can with one click access features such as Performance Monitoring, Radeon Chill, Frame Rate Target Control (FRTC), Radeon ReLive, AMD FreeSync, and Colour settings.

As mentioned in the intro, existing core elements that users might be already familiar with from the Radeon ReLive edition have been enhanced and/or expanded. For example the ReLive recording and streaming functionality now includes chat integration. Thus gamers can build community better when real-time streaming via Facebook, Twitch, Mixer, YouTube, Weibo and more. 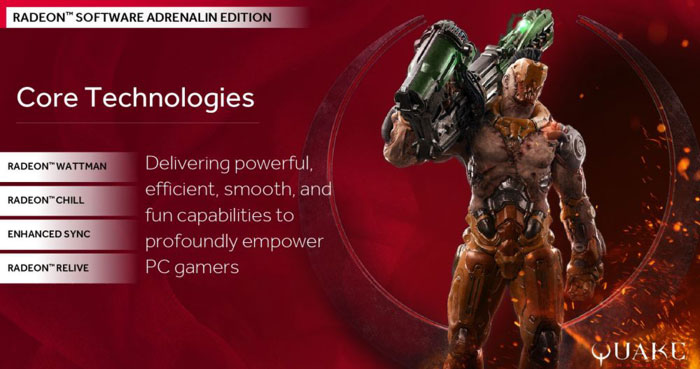 Radeon Chill now supports games based on the Vulkan API, along with DirectX 9, 10, 11, and 12. Radeon WattMan facilitates new custom profiles which can be saved, reloaded and shared with the community. Enhanced Sync now has greater compatibility and an even wider field of view. Additionally the Enhanced Sync functionality has been extended to Vulkan API-based games, Radeon GCN architecture-based products, Multi-GPU and AMD Eyefinity Technology for greater immersion.

Above is a summary of the new and improved features in AMD Radeon Software Adrenalin Edition. According to Jon Peddie of JPR, with this release AMD’s main focus is on community features as we have “entered a new era of connected worldwide gaming”. The smooth gameplay enhancing tools are bolstered but the major in-driver addition is being able to engage with friends and the gaming community in real-time.

To get the latest AMD (Adrenalin) driver for your graphics card please head on over to the official downloads portal.

Rubarb
It's no wonder gpu drivers are so big now with all this bloatware included in them :S

Not tried it myself. There was the option for a AMD Minimal Setup installer (~39MB) which just downloads the components you want.

This driver release is absolutely superb. Just been testing Enhanced Sync and the Performance Overlay in Planetside 2 and they work perfectly. Love the new options to trim game footage captured with ReLive. Got a new monitor coming next week too so really looking forward to using Chill and FreeSync :)
Posted by anselhelm - Wed 13 Dec 2017 09:24
This is a bit like an early Xmas present from RTG here. The sheer number of improvements is amazing, particularly enhanced sync. This will keep me going fine until I can get a decent FreeSync monitor (IPS/VA, >=1440P, 24", ideally HDR but not a deal-breaker).
Posted by Millennium - Wed 13 Dec 2017 09:35
It is really impressive. I watched the PC Perspective interview with AMD on the drivers (HIGHLY recommend PCPER website and youtube and podcast) and the amount of progress is quite commendable. I will be downloading these drivers soon (I don't game much so I didn't get them yesterday, also I'm doing some crypto stuff so I don't want to have to restart at the moment).

However as I commented on Reddit there still seem to be some Vega architecture features which the drivers don't take advantage of. The jury is out if these features even work (sheeesh) but I believe they most likely do (after all it's AMD, they are good) and I want to see these uarch features in the drivers sooner rather than later. Call it speculative, but I can see with these features the Vega 56 matching or beating 1080 perf. That's a guess. Good day!