Back in May HEXUS reported upon the official launch of AMD Radeon RX 560 graphics cards. There actually wasn't a launch event or fanfare of any kind, rather the card just started to appear in listings and on the official AMD website. We thought the release of this card was simply overshadowed by the fanfare that came with the launch of the first graphics card based upon the high-end Radeon Vega architecture, the AMD Radeon Vega Frontier Edition.

The news at the time was of the upgrade that the RX 560 would offer above and beyond its processor, the RX 460. Both are Polaris 11 GPU cards but as well as an upwards tweak in the GPU clock speeds (from reference 1090/1200 to 1175/1275MHz), the other change was and upgrade from 896 to 1024 stream processors. Companies such as Sapphire didn't delay in updating their ranges with RX 560 cards boasting the full Polaris 11 complement of 1024 SPs. There was one slight drawback to the change, the required peak wattage moved up from approx 75W to 80W. 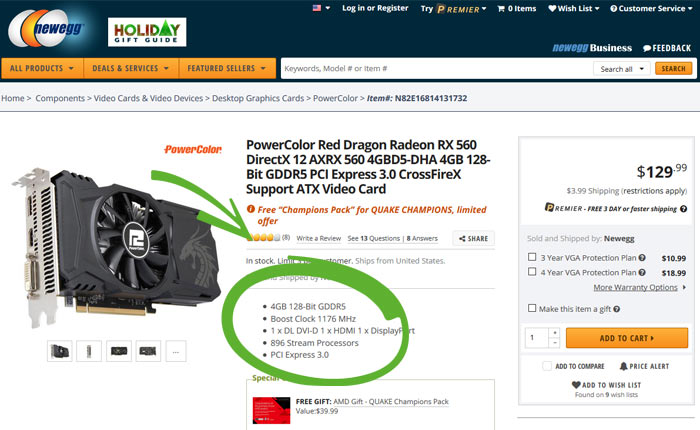 Now people have started to notice that graphics card vendors are shipping products labelled as RX 560 cards in configurations with 896 SPs, and others with 1024 SPs. Heise Online was first to report the change in official specs and presence of cards in retail with fewer SPs and no obviouos way to detect the difference while casually browsing. It notes that RX560 cards with fewer stream processors used to be referred to as RX 560D variants but now the 'D' suffix isn't required. AMD's official product page has been quietly updated with the RX 560 SP count as 896/1024, see below.

I looked at Scan.co.uk for examples but found the UK tech retailer to conveniently list the SP count alongside the product names, and it also included an 'RX 560D' in its offerings. Over in Germany, Heise found that there were a few examples of companies being less up-front about SP counts though. Heise notes that there are some Medion Akoya PCs with RX 560 cards with only 896 SPs and that Sapphire sells its Pulse Radeon RX 560 4GD5 under the same name - but with different serial numbers - one variant with 896 SPs (11267-18) and another with 1024 SPs (11267-00) - and their GPU clock speeds are different too. 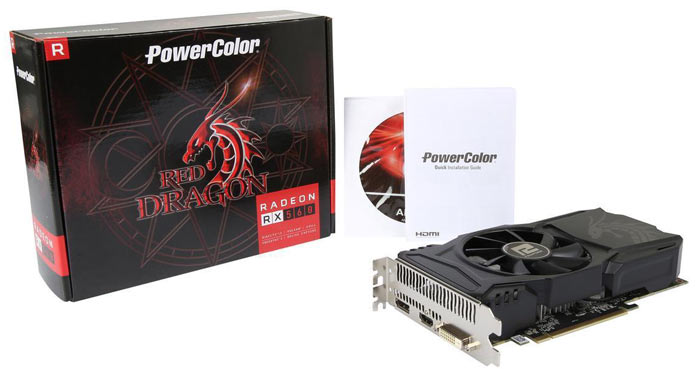 Meanwhile on Reddit someone shopping on Newegg (probably a US resident) noticed that PowerColor had several RX 560 graphics cards listed but the majority of them boast 896 SPs (like the one pictured above). It is thought that a fairer and clearer solution would be to retain the RX 560D designation on cards with the lower SP count.

It is thought that a fairer and clearer solution would be to retain the RX 560D designation on cards with the lower SP count.

Or they could label them as RX 465, which would follow AMD's original description of the RX naming scheme … which didn't even last a single generation of cards… :rolleyes:
Posted by yeeeeman - Tue 05 Dec 2017 15:01
Is this legal? Is the price different between them? It's like selling a car with 2/4 dours, but at the same price and same name.
Posted by excalibur1814 - Tue 05 Dec 2017 15:13
A nice little name drop and inclusion for Scan there. Be wary of their returns policy people!

“I looked at Scan.co.uk for examples but found the UK tech retailer to conveniently list the SP count alongside the product names”

If interested in the card above maybe try Amazon first as their return policy is simplicity itself.
Posted by scaryjim - Tue 05 Dec 2017 15:18

yeeeeman
Is this legal? Is the price different between them? It's like selling a car with 2/4 dours, but at the same price and same name.

Would you just buy “a Ford Fiesta” and assume it had 4 doors and a 1.6l petrol engine? I assume you'd do some research and specify that that's the configuration you wanted to buy.

I imagine that as long as there is some indication somewhere of how many SPs the card has it's fine. That may only be on the manufacturer's website, looking up the specific part number, though. Ultimately it's up to the buyer to make sure they know what they're getting.

It's certainly unhelpful, but not at all unusual. Nvidia have, in the past, sold three different configurations of silicon from 2 different generations under the same name. After all, when you buy an RX 560 you're contracting to buy “an RX 560”, not “an AMD GPU with 1024 4th generation GCN shaders”. Assuming the specifications based purely on a product name is a dangerous game.

excalibur1814
… If interested in the card above maybe try Amazon first as their return policy is simplicity itself.

That may be the case, but they don't list the number of SPs in their RX 560 listings, so you're going to be doing a lot of searching for part numbers to make sure you get the one you want…
Posted by iworrall - Tue 05 Dec 2017 15:19

yeeeeman
Is this legal? Is the price different between them? It's like selling a car with 2/4 dours, but at the same price and same name.