Intel launched its Tiger Lake CPUs for laptops months ago, but it has kept the most powerful parts with >4 physical cores and >35W TDPs in reserve. In January, it launched a trio of Tiger Lake H35 CPUs to create a new ultraportable gaming laptop category, sticking within these limitations. Not it looks like it is ready to roll out some more powerful TGL-H chips to feed the systems makers as a presentation of five new processors for gaming laptops has been leaked. Spanish language HD-Technologia leaked these slides and I spotted them at VideoCardz. 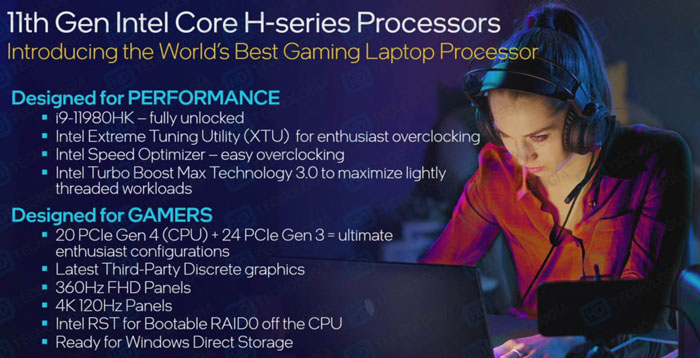 According to the source, and the slides, the new Tiger Lake-H processors from Intel will launch on Tuesday, 11th May. I am expecting a flood of partner announcements on the day too, with the likes of Asus, Gigabyte, HP, MSI, Acer, Lenovo, and Dell/Alienware outing updated gaming laptop models.

The new CPUs aimed at gaming laptops and including "the world's best gaming laptop processor" will include parts with 6C/12T and 8C/16T wielding Intel's 10nm Willow Cove compute cores built on 10nm SuperFin. They will also feature beefy peripheral connectivity and I/O – with up to 20 PCIe Gen4 and up to 44 PCIe platform lanes, great for fast GPUs and cutting edge NVMe storage.

As you can see from the above slide (click to zoom), the new flagship is the Core i9-11980HK, which is the only unlocked model. This top-end mobile chip from Intel has a TDP of 65W, with base clock of 2.6GHz, and all core Turbo of 4.5GHz but can run with up to two-cores at 5.0GHz. 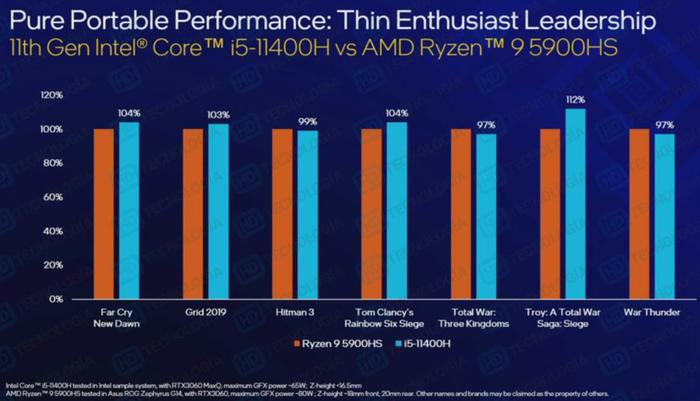 In a comparative performance slide, Intel pits its new Core i5-11400H against the AMD Ryzen 9 5900HS which has found favour in laptop designs refreshed in recent months. In seven AAA games tested by Intel its 6C/12T part takes the lead in four. Another point in Intel's favour is that its test system features a GeForce RTX 3060 Max-Q (65W) vs the AMD rival system's RTX 3060 Max-Q (80W) GPU.

New laptop GPUs on the way?

To coincide with these refreshed Intel laptops coming out there are rumours that the GeForce RTX 3050 / 3050 Ti will be released for laptops (which makes one wonder about desktop cards). HKEPC spoke of an 11th May launch for these mobile GPUs even before the above slides leaked. There is also an outside chance that AMD will have its first mobile RDNA2 graphics chips ready – like the Radeon RX 6700M or 6600M.

Posted by cybermarketingservices - Thu 06 May 2021 17:37
I wonder why would they bother refreshing the current lineup now, given that Alder Lake-H is only a few months away.