On Tuesday Intel officially unleashed its 11th Gen Core desktop processors, also known as Rocket Lake-S CPUs. They delivered new CPU and integrated GPU architectures with various new worthy features and Intel claimed the CPU could deliver up to 19 per cent IPC improvements over its predecessor – which sounds pretty good. However, the HEXUS editor reviewed the Intel Core i9-11900K and concluded that it didn't really deliver on its promises, and overall the flagship, and the range in general, failed to impress. 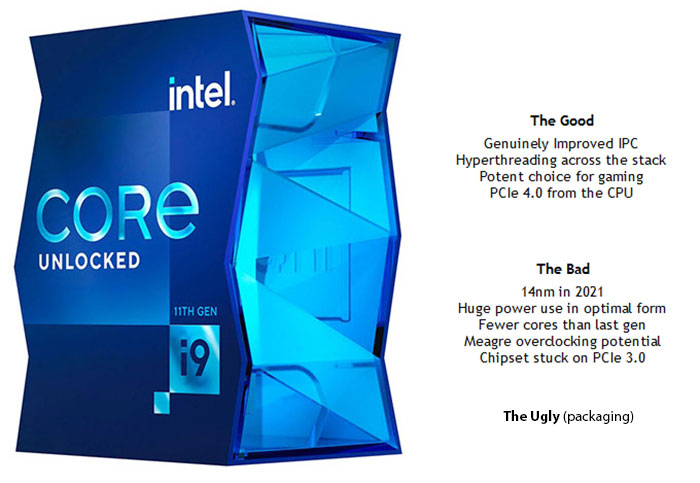 After reading our 15-page analysis of the Intel Core i9-11900K you might not have expected much from the chip in terms of overclocking world records and so on. I have received quite a number of emails off outfits like Gigabyte and MSI in recent hours though, and it looks like Rocket Lake-S has sparked quite a few world records and the like. Checking over the HWBot site, it was therefore interesting to find a news blog post charting the OC successes of the Intel Core i9-11900K and 11900KF, which have been quite numerous already. 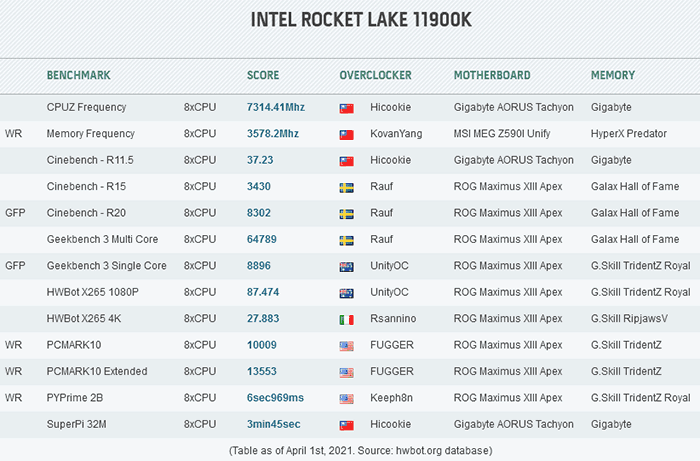 Some of the world record (WR) and global first place scores (GFP) are simply things like the best CPU frequency for that CPU – so nothing to be excited about when comparing against previous Intel CPUs and the AMD Ryzen competition. There is plenty of other meat to chew over though - like the world records in benchmarking apps like Cinebench, Geekbench, PCMark and others. All the world records gained by the Core i9-11900K(F) are for the octa-core CPU category (8xCPU) – it didn't manage to grab any single core records. 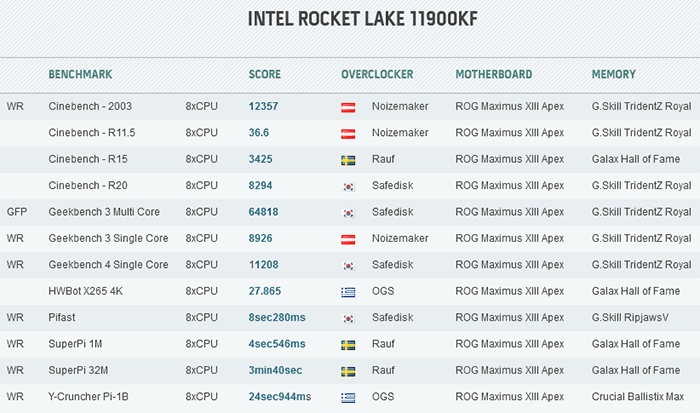 If you head on over to the linked HWBot page you can click through to see details of any of the records that take your interest. Some records have made it to the social media and news pages of companies like Gigabyte, MSI, and HyperX too. 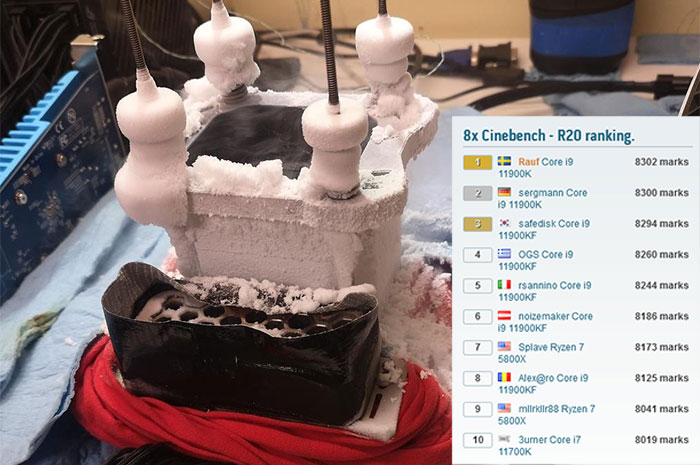 As an example of the new records gained by Intel, OC expert Rauf now holds pole position in Cinebench R20 for users with an octa-core CPU (see above). He is joined by several other Intel Core i9-11900K/KF users in the top 6 in this category which was previously dominated by AMD Ryzen 7 5800X processors.

Posted by CAT-THE-FIFTH - Fri 02 Apr 2021 11:35
Its why I think the Core i9 is a disguised Emergency Edition CPU which uses leakier silicon.
Posted by bae85 - Sat 03 Apr 2021 22:19
This has got to be an April fool?
Posted by rave_alan - Mon 05 Apr 2021 13:55
If it is not impressive during a real world use, than the records are not all that important!Normal user will never buy equipment like this to cool cpu, makes no sense and it is unstable.Looks like intel makes chips just for overclockers just for marketing purposes!
Posted by cheesemp - Tue 06 Apr 2021 14:14

rave_alan
If it is not impressive during a real world use, than the records are not all that important!Normal user will never buy equipment like this to cool cpu, makes no sense and it is unstable.Looks like intel makes chips just for overclockers just for marketing purposes!

cheesemp
So true - Would I rather have a chip that works well with standard cooling (AMD) or a chip I need LN2 to really benefit from (intel)?

LOL silly, you don't need LN2. IIRC what normal users are expected to do is have one of these: and for those who missed it the first time: https://www.tomshardware.com/news/intel-28-core-cpu-5ghz,37244.html