Rocket Lake-S CPUs are on the precipice of availability for PC DIY enthusiasts, but some might be inspired to wait until a bigger change arrives with the 10nm Alder Lake-S hybrid architecture chips, which are still scheduled for later in 2021. PC DIY enthusiasts are getting into the habit of holding onto hardware for longer, not least because various upgrades are very hard to find. So those using 10th gen Intel Core processors, for example, might even go as far as skipping 11th and 12th gen, now we have a solid indication of the 13th gen is on the way.

At the weekend Intel's support site shared various documents that mentioned Raptor Lake-S. An eagle eyed HEXUS reader sent us the links, but the documents required Intel credentials to access, so we could only peruse the document titles and summaries. Twitter tech watcher momomo_us noticed the accidental reveal too. A few hours later the link has been 'fixed' and now reveals nothing. 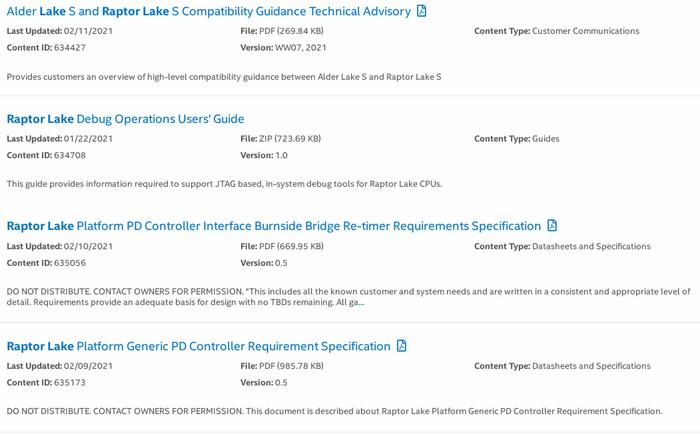 High-level compatibility refers to the compatibility features that will be noticed by consumers. In other words, it looks like Intel is talking about the intergenerational compatibility of sockets and chipsets. The upcoming Alder Lake-S motherboards will introduce the LGA 1700 socket and be supported by the Intel 600 Series chipset. Well, it looks like these will last more than that single generation. That there is a compatibility technical advisory document necessary might mean that things aren't very straightforward. Looking at the way Intel does things, this might mean the cheaper 600 series boards won't support the Alder Lake-S refresh AKA Raptor Lake-S for various reasons. Additionally, those keeping hold of their older motherboards might miss out on some or other new features of the 13th gen processors.

Raptor Lake-S, like its predecessor, is expected to be available in mobile configurations - Alder Lake is being prepared for both desktop and mobile. It will likely tweak the then established 10nm hybrid architecture with LPDDR5X/DDR5 memory and PCIe 5.0 support with various optimisations to CPU core and caching.

Given that Raptor Lake-S won't arrive until sometime in 2022, it will be facing off against AMD's 5nm Zen 4 core processors or newer. Remember that AMD's EVP of the Computing and Graphics Business Group, Rick Bergman said his firm is looking at similarly pleasing generational leaps with its Zen 4 CPU and RDNA 3 GPU architectures as last time around, so the Raptor Lake-S will have to face tough competition.