Intel introduced the Performance Tuning Protection Plan alongside some of the earliest 'K' suffixed multiplier unlocked overclocking-friendly processors (starting from approximately the Sandy Bridge era) nearly a decade ago. The PTPP was an optional extended warranty that took some worries away from OC high jinks, and it explicitly covered damage to the CPU which might be precipitated by overclocking. Importantly Intel's standard warranty didn't / doesn't have this level of cover*. Now Intel has posted an EOL notice for PTPP, and this level of service is no longer being provided. 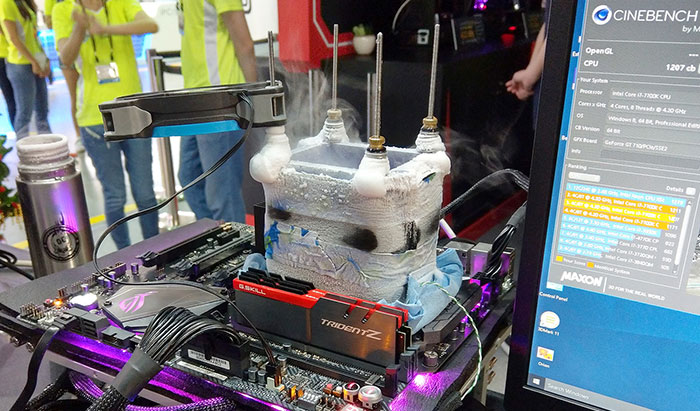 Intel's PTPP was quite good value if you were considering pushing your shiny new 'K' processor with any kind of esoteric cooler. For an additional one-off fee of between $20 and $35 the buyer could get a one-time replacement of the OC damaged processor. The one-time nature of the coverage probably went a long way to prevention of abuse of this OC warranty. Importantly, anyone who already has cover will keep it until that warranty expires, but you can't opt in to this program any more.

Intel reveals some of its reasoning for ceasing PTPP coverage in its EOL notice. It asserts that "customers increasingly overclock with confidence," using official tools like Intel Performance Maximizer and Intel XTU, so that the extra level of warranty isn't really necessary. Hopefully this is correct, and Intel truly is withdrawing this service due to customers not needing it. 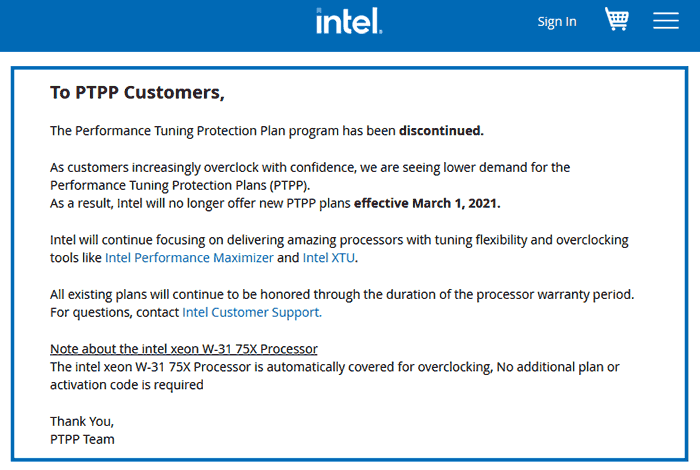 Are any HEXUS readers disappointed by the withdrawal of Intel PTPP before the official roll-out of the Rocket Lake-S desktop processors?

Posted by bae85 - Tue 02 Mar 2021 13:16
Maybe it's because their new chips won't have much headroom because they're already pushed to their limits out of the box!
Posted by QuorTek - Tue 02 Mar 2021 15:05
They are expensive room heaters anyway at current state, it is amazing how long they have been able to drag their build, and also it raises the question on why they have been cheating on their customers for so long.
Posted by cheesemp - Tue 02 Mar 2021 15:48
Lets face it there is little head room outside the normal boost range now with both Intel and AMD. At best you can get longer boost on more cores with a better cooler. Its not like the ‘good old days’ when you could buy a 3.4ghz chip and stick it up to 4Ghz with a £15 cooler (Thinking back to my previous i5 3570k).

Also I think if you are experimenting with LN2 or similarly crazy cooling solutions then the risk of killing the CPU is no more than the motherboard/ram with condensation!
Posted by spacein_vader - Tue 02 Mar 2021 18:13
Nah, the good old days were when you could make a an AMD Thunderbird processor into the next class up by applying a pencil.


Or when Intels dabbing had so few poor dies that you could reliably take a Pentium Dual Core E-2140 from 1.6Ghz to 4Ghz with a few bios tweaks.
Posted by Gentle Viking - Tue 02 Mar 2021 20:34
Hehe bridging laser cuts.

Way before that you had to snap a little devise ( called a GFD ) to your CPU to change the multiplier, and solder additional components to your motherboard and GFX to be able ti increase some voltages.

My last Intel CPU was pretty much a re-binned EE CPU, as evident my the number of components in the hole on the “back” of it, it also OC quite well.

Again, kids today got it too easy. :mrgreen: